Sticking with a Painting and a Theme 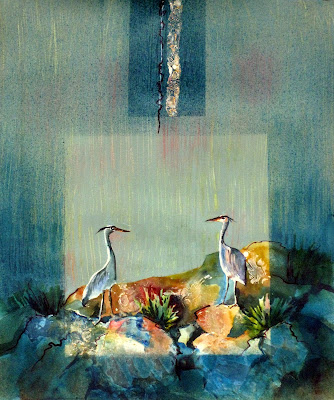 This is truly a mixed media piece that was born out of my dedication to a theme/series and experimentation.  My goal was to use a low horizon vertical composition  because I find that a visually delicious format.
I started with pasting a few pieces of rice paper on the rocky area with gesso. (Something that is new to me.) Next I put on color in the background and rocks and grasses with transparent watercolor, my most familiar medium.
As soon as that was dry, I experimented with tinted gesso to create the upper background. Prior to putting that on, I'd notched an old credit card in preparation to scrape through the opaque gesso while it was wet. You can see that method reveals some of the transparent watercolor underneath. When I left the studio at the end of the day, I thought the two portions of the painting (watercolor on the bottom with opaque gesso on the top) was a disaster, but that was Thursday and yesterday was another day.
When I went out to the studio yesterday, I faced trashing the painting or trying more experimentation and chose the latter. I thought creating a window effect would unify everything, so I taped a pleasing sized paper to protect the inner part of the painting and used my mouth atomizer to spray a darker blue-green, trying to use gradation--darker at the bottom, lighter at the top.
The painting was shaping up, but the top was too vacant. The question was how to make it interesting, yet tie the whole piece together. I'd recently carved a stamp of petroglyph images (Native American rock carvings) on a rectangular stamp. That was cool, but too big, so I carved on the edge which was about 3/4 inch x 4 inches. Again using petroglyph images. After stamping with acrylic paint on a sample sheet, I recarved the edges to be irregular and more stone-like. Then I cavalierly plopped the stamp on the top of the painting.
When I stepped back, I realized that the stamp was WAY off center! Had I measured--no. I immediately took a wet cloth to the paper to remove the acrylic before it dried. That's when I messed up the surface in that area. Geez, just when I was beginning to like the painting.
So that's when the dark rectangle at the top came into being. I did that with more atomizer spraying. The smudging was a brilliant mistake, because my cover-up created a lovely showcase for the stamp. I used a little bit of stamping on the rock to add more unity.
Up until this point, the herons had not been painted. I often leave the detailed work to the last. Why paint something detailed and lovely, only to ruin the rest of the painting? So I painted the birds in watercolor, used pen and ink to add some line and calligraphy work to the piece. I'm glad I kept going. I learned a lot, built confidence in my ability to problem-solve and ended up with a pleasing painting, don't you think?
A question to my fellow artists.  Is putting natural colored rice paper on your surface as a preparation to paint considered "collage"?
Posted by Margaret Godfrey at 10:19 AM

I wish I knew the exact answer to your question about use of rice paper/collage. My guess is that in some show rules, plain rice paper that you've painted on top of IS valid as long as it only makes up a small percentage of your total painting.

In shows where the rules are stricter, they often state that all collage materials must be made of watercolor paper, so that's something to think about.

Not sure I really answered your question, but you've given me a new technique to try! Thanks!

Congratulations Margaret, you've created a really beautiful painting! I'm not sure I'd call it a full-blown collage, but it definitely has aspects of collage in it.

Thanks for sharing!
Patrice

Love the painting. Especially like the bright heron window.

Gosh Margaret; I love this one. Even with all the work and "happy accidents" it looks so fresh. You go girl!
Jennie O