Minor Changes Can Improve a Painting

I painted Gone To Ruins this past summer. I entered it into a competition in the fall and it was rejected.

It was, in ways, a hard piece to paint in my style, because it is a structure and there are no organic elements except for the sky. I liked many parts of the painting, but always felt it was too static. I also saw the small pieces going out of the painting as too busy.

Because I still had faith in the painting, I decided to make some minor changes to correct the 2 things I saw as problems with the piece. 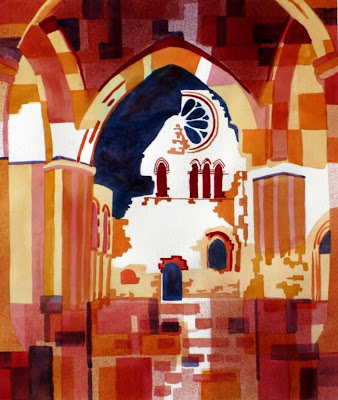 Gone To Ruins   (Before) 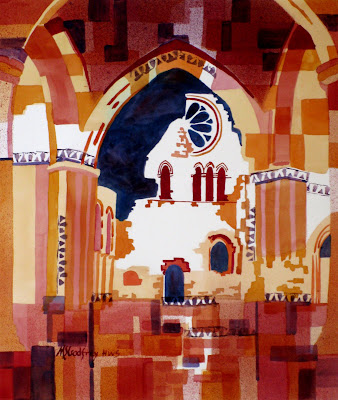 Gone To Ruins (After)

To add a bit of movement to the piece, I made a small stamp and used it in a number of places to add interest, a sense of play, and detail to tie the large blocks to the more intricate interior. I also reworked the lower portion to eliminate the smaller blocks that had pulled the eye out of the painting.

I entered the revised version of the painting in the Emerald Art Center's National Show competition and the piece was accepted.

Do you see the changes as improvements?
Posted by Margaret Godfrey at 10:35 PM

Yes, I see improvements in the variety of shapes now. You have enhanced the scale of the bottom half of painting by color massing. Congratulations once again for pulling all these improvements out of your........
Magic cowboy boots!