The Evolution of a Painting--"Skimming"

I started this painting in a workshop I taught in March. I liked the heron, but found the background too contrived. I was influenced by my success with another vertical strata painting, and wanted to revisit that compositional format in a horizontal painting. 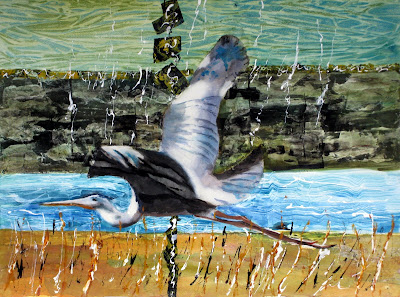 The next step I took was to get rid on the thin decorative line under the bird, and tone down the ink made marks in the gold/green bottom layer. This was done by tinting white gesso and covering the bottom part of the the painting and texturing it with my toothed credit card tool.  I made the upper squares larger and added calligraphy to enhance the line coming down to the dark. I also made the hard line above the water more interesting by adding some collage pieces. (Ignore the overall color change, as it is simply a photo and computer issue.) 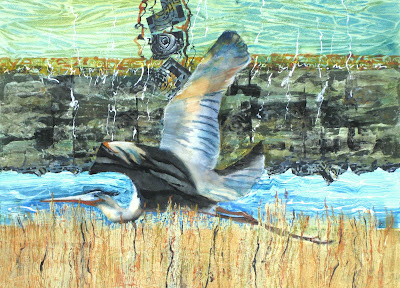 Eventually, I got rid of the light colored upper strip, combining it with the dark, yet leaving the break made by a stamp. Once this was done, I had to make the upper wing light against dark, rather than dark against light. I had to use light around the upper squares to keep them from just blending into the dark background. I got some advice from a friend on how to make the forward wing more interesting and believable. I put a blue/green wash over the foreground to tie it in with the top of the painting, creating more color harmony. 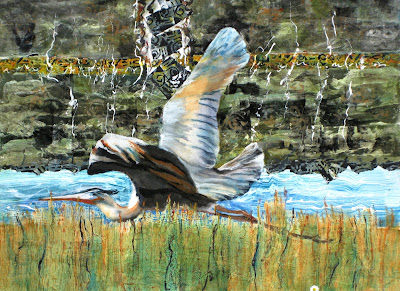 Today when I looked at the foreground, I realized that the green was too dominant. But how would I neutralize it? (I thought back 20 years to when the house paint I bought turned out to remind me of the color of urine. Since I had bought several gallons, I took it in for the paint expert to neutralize the yellow and create a tan that I could live with. I remember my surprise when he said he would add a few drops of magenta.  It worked!) So today, using that past memory plus stuff I've learned through my years of painting that a magenta transparent wash would do the trick. To finish the painting and give the horizontal composition a vertical line, I cut around a stamped paper and painted a pleasing color on it, glued it down at the bottom. I adding that green to my upper squares, de-emphasizing the white. So now is it finished? 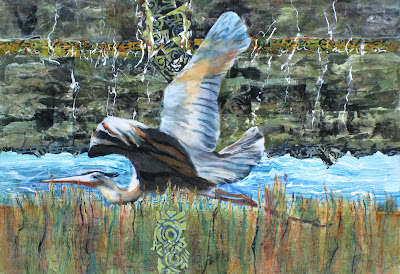 Painting Company
Thank you for sharing superb informations. Your site is very cool.

I really admire the way you work on a painting until you get what you want. Your strata paintings are keepers!

Hi Margaret,
I love seeing this in a horizontal format! I think what you've done to simplify this painting has helped it. And your color balance is right on... I still feel like the bottom band could use a little more dark... either all over or as an accent or tie to the bottom of the page. I'm not sure, but it would be worth trying with a piece of paper. Fun to see your process!