Take a critique group, some torn paper scraps and ask for a little help with the final touches to a painting; stir the ingredients with an openness to ideas from willing helpers and you get a art party which includes a lot of laughter and group participation. 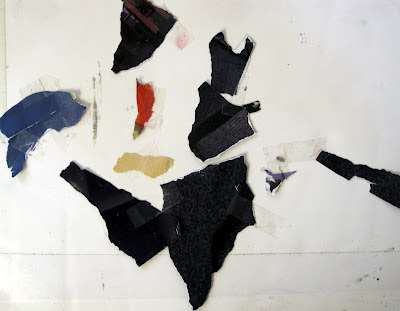 That's exactly what happened last Friday at my mid-month critique group. I had three paintings that I like, have worked on, yet felt they weren't quite there.

First up--Skimming. I've posted this before, but have not "loved" the entire painting. 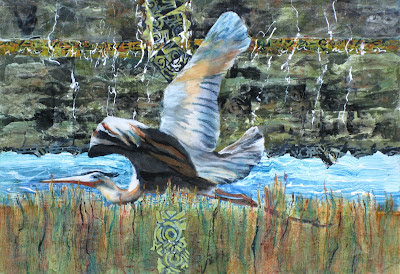 
There were no paper scraps taped to this one, but I made some suggested changes. I took out most of the grass that was covering the heron's beak, and belly. I replaced the grass under the heron's belly with water and lightened it to a light blue. My mentor and friend Lois Enman pointed out that the farther wing was not feathery, where the one coming toward the viewer was and it more successfully conveyed the bird's wing. That was something I should have seen myself, but didn't and it was a great improvement to the bird. There are now some added darks around the decorative symbols under the heron. Finally, I took about 2 inches off the right-hand edge of the painting. Skimming is now signed and finished (I think.) 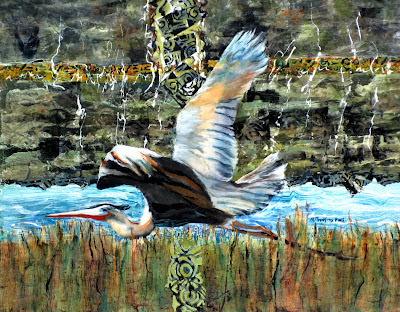 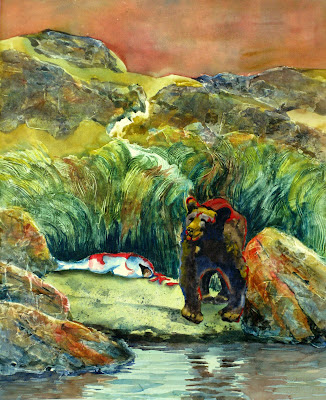 This guy started getting my group revved up. There was a lot of discussion of the red on the bear and fish. This had been my interpretative color for predatory behavior. But the painting started a tear and tape session. Mr. Bear got a gold colored back. The sandy beach got a new shape as did the rock to the right of the bear. A diagonal dark was created with paper from above the right hand rock, behind the bear and across the sand in front of the salmon. The dark green grass bothered most of the group.

So I came home with a lot of suggestions and a painting with many taped on bits of torn paper. As I looked at the picture in my studio, I made some compromises for the sake of a stronger painting. The bear now has more light on him and less red. I made this change as I realized that the bear was not equally sharing the limelight with the salmon. I also darkened the salmon a bit. The rock to the right has a new shape and the diagonal line is now part of this piece. Can you see it? I worked on taking out some of the overwhelming green of the grass and added some red in the upper part of the painting. Finally I put a warm wash over the sand to create more color harmony. 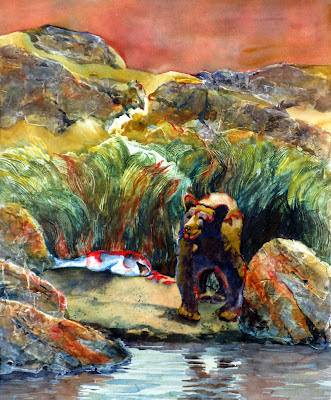 
By the time my third painting was placed on the easel, my art buddies were warmed up for this picture that needed a lot of help. I had hung on to it because I loved the rocks and the water, but the middle v-shaped part of the picture was undone, and I knew it needed something I had not yet envisioned. This was the perfect piece for group opinions and ideas. There was almost a race to the paper and tape, as ideas flew up on the painting in the form of torn paper pieces. I was laughing so hard, I could hardly take in any of the conversation. One person had hardly stepped back when another came forward with an addition or adjustment. I don't know whether to feel good about the stimulus my painting gave to everyone's creativity, or to feel like I need more help than the average artist. Mostly, I thought it was great fun!

I wish I could show you a before, but I forgot to take a photo before working on it. But here is the piece as it is now. I haven't given it a title yet. Any ideas? 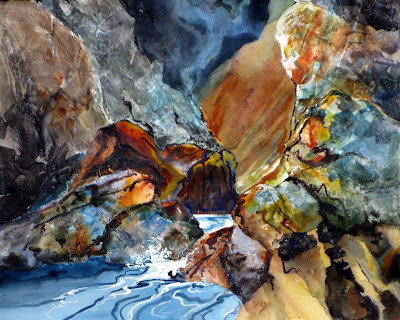 Posted by Margaret Godfrey at 6:29 PM

I love the rich colors and textures of your work. Good for you for being open to changes. It is easy for me to get stuck on a piece and I appreciate fresh eyes from someone else to help see things I didn't. Lovely paintings!