Ten days ago, I finished and posted a painting that I felt excited about. My joy was partly due to the fact that I had not had much studio time lately, but mostly because I loved the design, colors, and simplicity of the piece.

But as I lived with it and got comments from various people, I realized that I had missed the mark when the main figure did not read as feminine. Also people were seeing ethnicity in the figures, when none was intended.  One art friend said he thought the top chef was a Swedish man!

Since the idea behind the story is the fact that most top chefs are male. It is a difficult journey for a woman to get the same kind of recognition in the restaurant world. In fact, women represent around 19% of top chefs.

What did work were the colors, the design, the left white, and the idea. What failed was the main figure. I guess it is mostly androgynous. I wouldn't say that the painting failed, because I see it as fun and interesting, but it doesn't say what I meant.

So the last few days were spent with a redo. Let me know what you think. Below is the first rendition of Top Chef.

And below take a look at version 2, "Nineteen Percent." 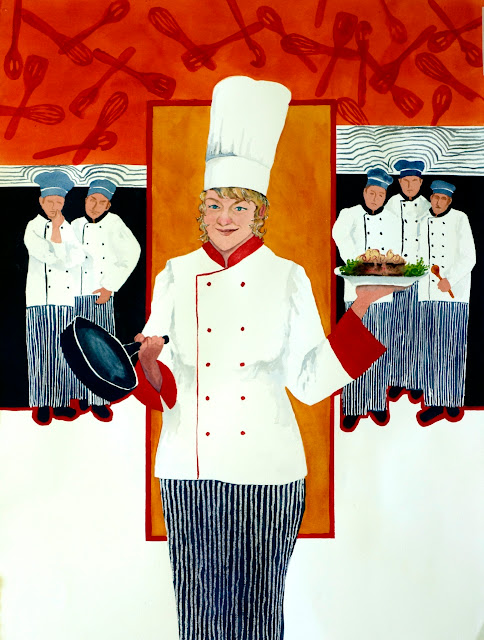 Posted by Margaret Godfrey at 5:09 PM

The figure is clearly a woman now- and you still have her classic, spunky expression! Love it!

I like both versions, though I think the second one is stronger. The first version reminded me of Marc Chagall paintings for some reason.

I particularly like how your design supports your intentions.

Before reading this, I really identified the main chef as you! I thought maybe a new adventure in cooking? Would love to take one of your workshops. Beautiful and interesting work!