Another Big Trip--Spain, Gibraltar, Portugal with a Dido into Africa 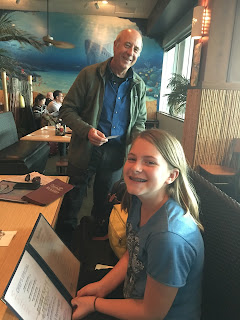 Here are my two traveling companions having our last American dinner (Portland Airport) for twenty days. We had planned this trip for over a year, inviting our soon to be 13-year-old granddaughter to join us. A few hours later, with a brief stop in Frankfurt, Germany, we landed in Barcelona, Spain. Landing in the evening there, we were anxious to get into the city and find our airbnb home for the next couple of days.

It's never easy to adjust to a new place, language and ways to travel from a foreign airport to the city. We looked at public transportation, Uber (which doesn't exist in Barcelona), and finally decided on a taxi. After some very broken up conversations between Mike and the airbnb host, we found ourselves waiting to meet him at an outdoor plaza with plenty of cafes covering the cobble-stone square. It didn't help that the host's native language is French and our Spanish is sparse. But soon, we were headed into what looked like the setting of a European mystery movie.We were in the Born District. 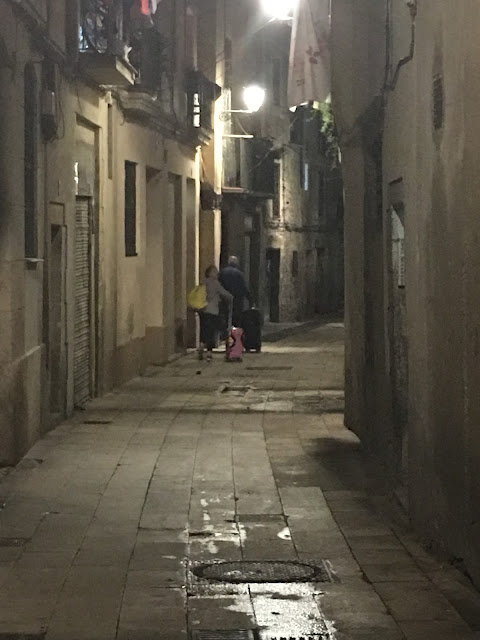 It is always difficult to adjust to an 8 hour time change. We didn't sleep well, but we were in Barcelona! Everyone had the up and at'm approach. We only had a couple of days to see a small part of this beautiful city.

I already knew I wanted to see as much of Gaudi's architectural fantasies as possible. So the first place we visited was the Sacra Familia. This landmark has been under construction for 130 years and continues toward an unknown finishing date. Gaudi was dedicated to the project for decades until his death. So what makes his work so unique? I'd say he followed few rules of what others thought a building should look at. He combined Gothic, Art Nouveau, and Modernism. He created organic rather than geometric shapes. Marin and I fell in love with everything Gaudi. 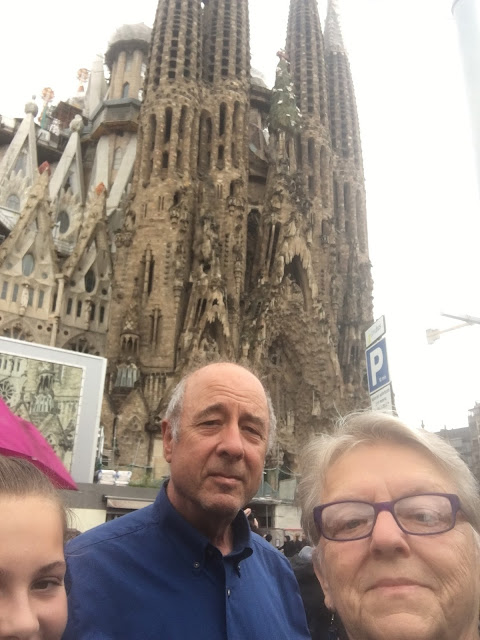 The front of the Sacra Familia has the organic drippiness that says "Gaudi." As the building has continued, it has been transformed from the 1880's vision to a much more modern look. 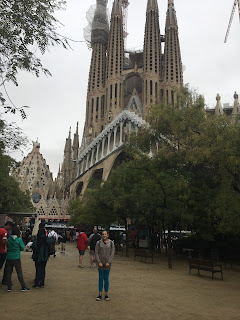 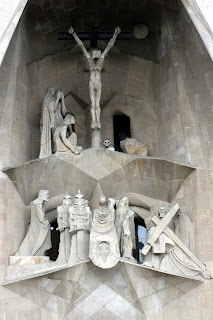 Since Barcelona is such a tourist destination, we were not able to get tickets to the interior.

Next on our day of everything Gaudi, we traveled up to Güell Park. This hillside park is full of Gaudi's fairytale-like buidings. (Did Walt Disney visit here?) 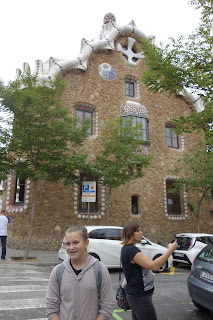 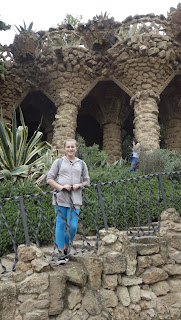 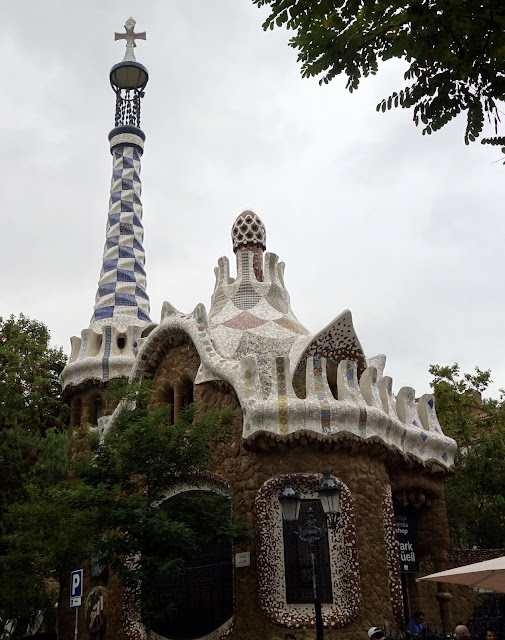 One of Antoni Gaudi's most famous architectural wonders is Casa Batllo. This was a total remodel of one house in a row of very traditional multi-storied homes in what was the prestigious area of Barcelona. This makeover defines risk taking in architecture, and the Casa Batllo stands out like a colorful thumb. 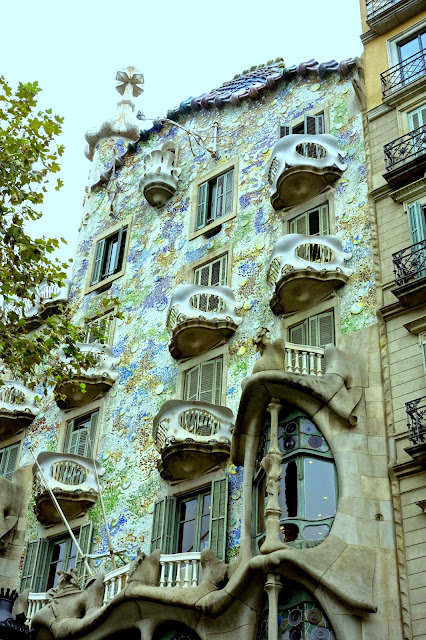 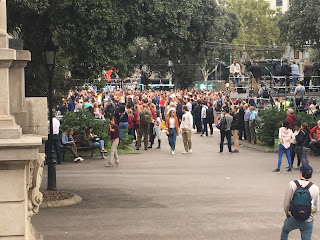 An additional event occurred during our memorable visit to Barcelona. We were there on voting day. The people of Catalan voted for the Catalan independence referendum. We saw no violence as the Spanish government attempted to stop people at the voting sites, we did see crowds and hear chanting and speeches, which, of course, we could not understand.

From the architecture of Gaudi, we went back a few centuries. There are the magnificent cathedrals and churches to visit and admire. These places teach me to always look up and down. The design and art are not only on the walls.

The Barcelona Cathedral dates back to the 12th Century. 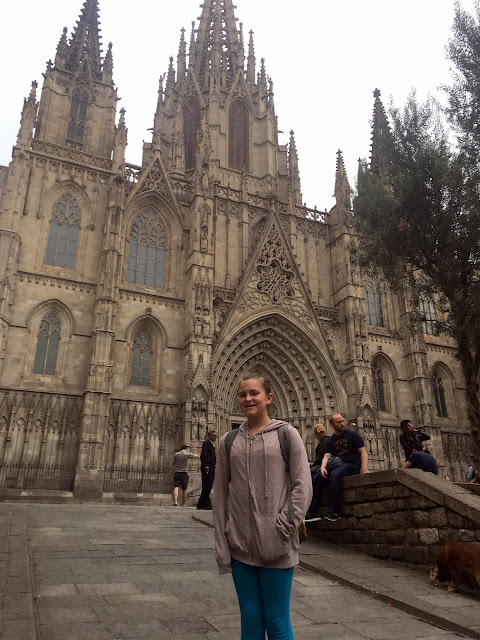 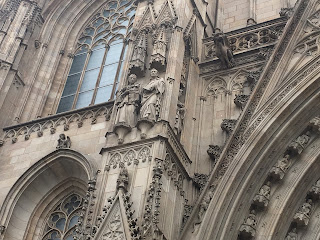 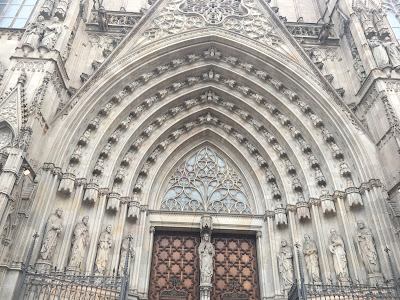 For 5 Euros, we took an elevator to the top to get this fabulous view of the city. So much art is on the top of the buildings that one cannot see from the streets. As Mike pointed out, they were created for the eyes of God. 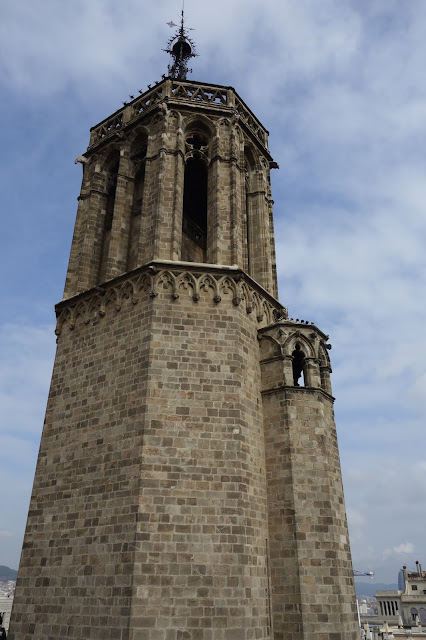 Then moving up a century to 1300, we arrived at the church of Santa Maria del Mar. This location was a sacred spot for centuries before a large church was built on the site. There is a certain sadness to this church because it was burned by revolutionaries in 1936. The interior wood and centuries of art were destroyed as the building smoldered for 11 days. The stone stood and the floor remains where you look down to see you are standing over someone's remains. 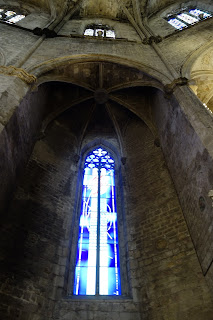 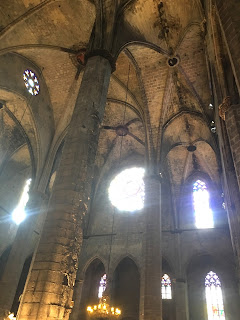 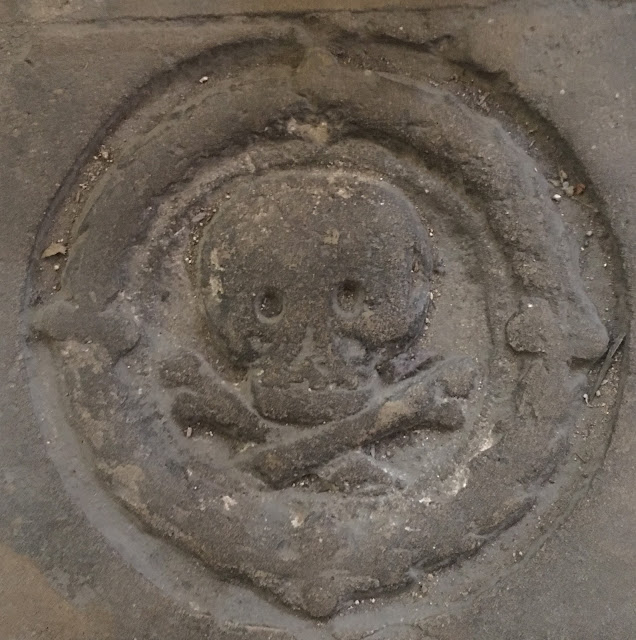 We visited the National Museum of Catalonian Art where there are surrounding artifacts from various events that happened in Barcelona: the Magic Fountain (from an International Exhibition in 1929) and Greek Columns (from the 1992 Olympics). The building and statuaries are impressive. We even learned (from Marin on her Smart phone) something about the invasive species of parrots that were nesting nearby. They originally came from South America and love the climate of Spain and Canary Islands where they've become pests. 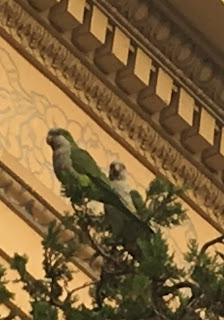 The following morning we boarded the speed rail to Madrid just an hour before the city closed down in protest to Spain's resistance to accept Catalonia's vote for independence. 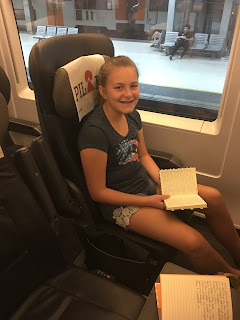 Enough for one read. Stay tuned for further posts about this trip!
Posted by Margaret Godfrey at 12:38 PM