Failure Can Be "the Mother of Invention" 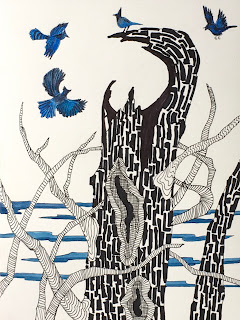 We are just three weeks from the one year anniversary of our home burning down in the Holiday Farm Fire. Daily trips to "Godfrey Acres" has allowed us to watch the slow, but predictable renewal of nature's greenery. First signs of returning life were songbirds and ferns. It's amazing to see the burned root clumps of a fern sprout new growth.

And after the usual spring volunteering weeds, ivy, and maples came some amazing colors. In the dry heat, petunias started popping up all over. And then I spied an unexpected snap dragon. 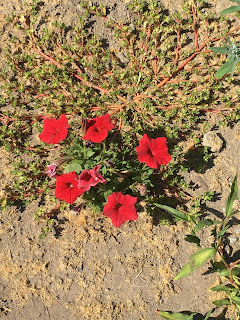 And so as I began to add birds to my graphic art this winter, I am now adding flowers that have shown up on the property. Not only on our property, but up and down the entire burned region, sunflowers are not only growing, but thriving. 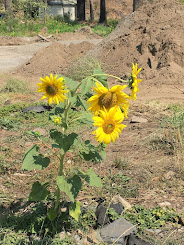 So now to the title of this post Failure Can Be "the Mother of Invention." 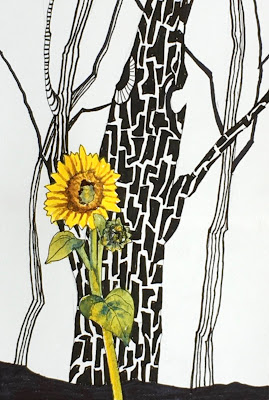 This week I included my first flower to my graphic art and was pretty pleased with the results. The sunflower set in the burned bark conveys a cheerful, more hopeful image of our current state. I wanted to continue with this new addition to my graphic pieces.
So I chose to put the incredibly determined petunias into my art. (They are labeled as annuals, but the seeds apparently like the challenge of procreation.) I was excited to add the lovely fuchsia colors to my black and white art. 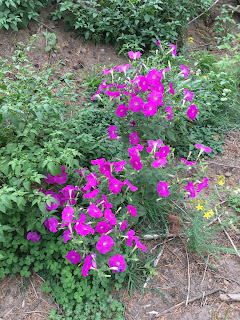 I began with creating a protected area for the leaves and blooms using the blue film as I often do. I then moved on to drawing and patterning the bark of trees in the background of my bunch of flowers.
After I was done with the graphic work I peeled off the film and saw that the film had roughed up a bit of the paper's surface. But I forged ahead anyway, figuring that it wouldn't matter once painted. I was wrong! The paint did not go on in the smooth way watercolor should and the paint was not as vivid as I had hoped. So as is my want as a stubborn person, I began to think of ways to solve this failure.
I could paint over the vegetation with acrylics. I could try collaging vivid flowers into the painted area. Neither of those ideas seemed to connect with me. In my frustration, I took scissors to the piece and just cut off the bottom. Now what? Again in stubbornness, I refused to give up on the work I'd already invested in, so I had a new idea. I glued black and white upper part onto a piece of black gessoed paper. Viola!! I now had a path to finishing this art. 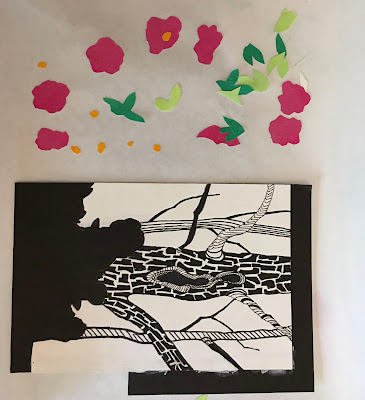 I would collage flowers and leaves into the black. In a way, it talks more about the reality of seeing these amazing colors arise out of the soot and ashes the fire left behind, than a simply painted flower does. So where I had failed in a part of this creation I came up with a solution. For anyone who thinks cutting, planning and gluing is easy or fast, it isn't. I could have started an entirely new piece and finished it in about a third of the time it took me to think of and apply a solution to the failed piece. Did I mention that I have a stubborn streak? 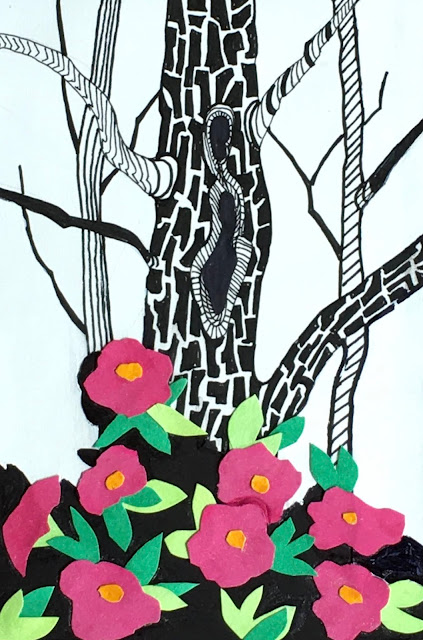 To end this post,  Good News on the rebuild front. We have broken ground on our house to come! 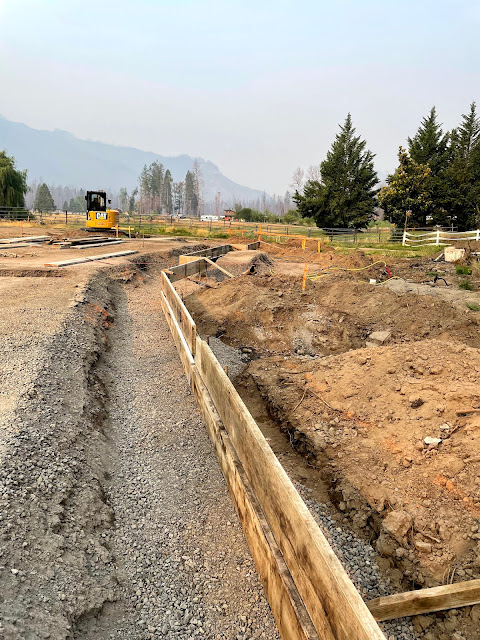 As always, I'd love to hear your thoughts about my art, or my blog, or whatever!
Posted by Margaret Godfrey at 4:25 PM