Mike and I celebrated the change of seasons with a week-long trip to California and back. Our main destinations were Yosemite Park and Forestville, CA where good friends have moved from Hawaii. From there we chose spots along the way to visit other areas of interest.

Our first stop was Tule Lake. This is a very small, rural town in Northern California east of the Cascade Mountains. We had always wanted to see Captain Jack's Stronghold which is part of the Lava Beds National Monument. Our sunset view from our motel the first night inspired a small watercolor sketch. 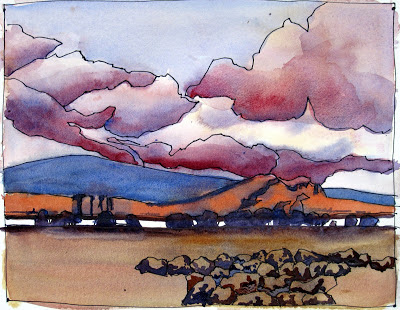 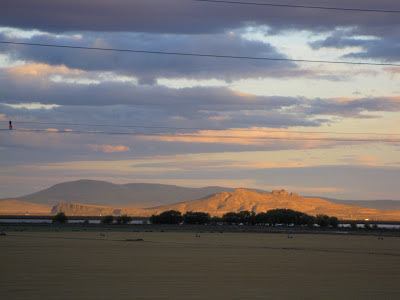 There is another piece of historical interest at Tule Lake--it was the site of the largest WWII Japanese Internment Camp.

Our visit to Captain Jack's Stronghold was surprisingly emotional for me. In this really desolate environment, 50 or so Modoc Indians held their ground against up to 1000 Calvary soldiers for a year. And why?  The Modocs did not want to be pushed onto a reservation with Klamath Indians, who had already claimed the resources of the land. Once Captain Jack was captured, he was hanged as a murderer. The war between the Modocs and US Army was never acknowledged as such by the US Government. We shared the Stronghold with two other visitors (deer). 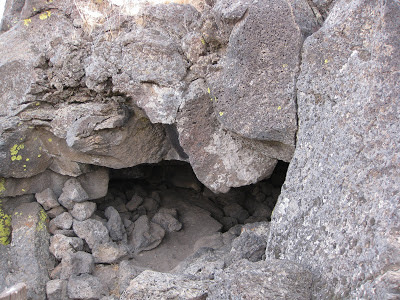 A deserted cave at the Stronghold. 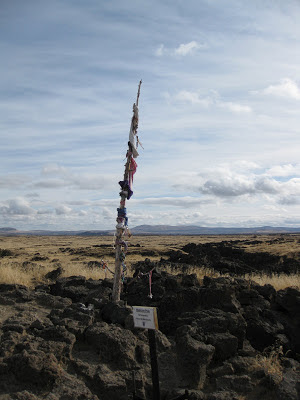 
After leaving the Lava Beds, we made a short stop at a cliff with petroglyphs, some as old at 3500 years. 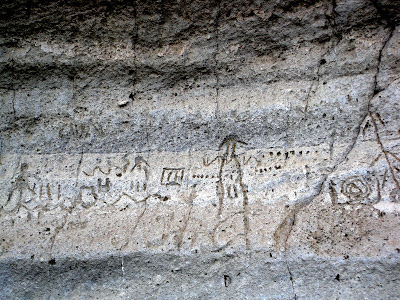 Our next night was spent in Reno at a humongous Casino Hotel. Once again we determined that neither Nevada nor gambling are for us. The following morning we headed up to Tioga Pass, elevation just shy of 10,000 feet. This was our route into to Yosemite National Park. (The first snow fell right after we got through, closing the pass for the season.) 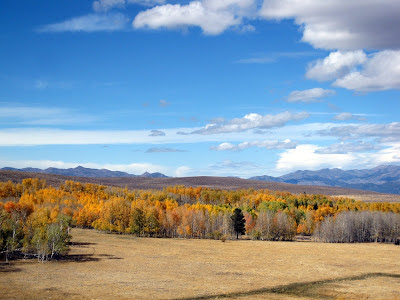 As we dropped into Tuolumne Meadows, the scenery with the glacial rubbed granite was nothing short of breathtaking. 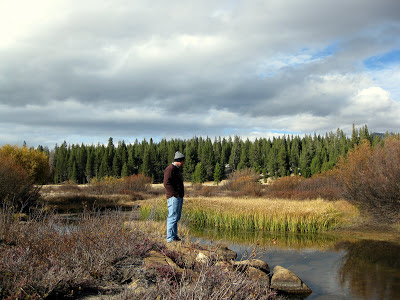 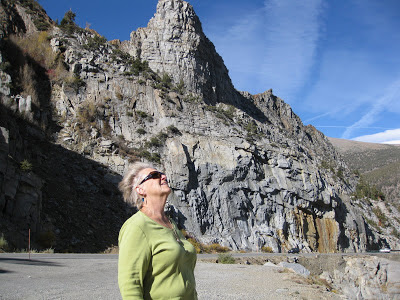 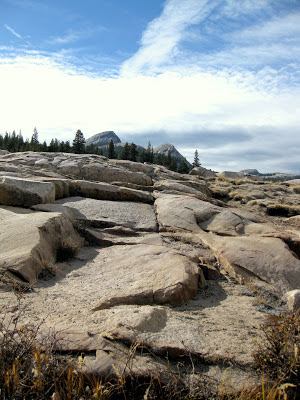 This view inspired a value sketch. 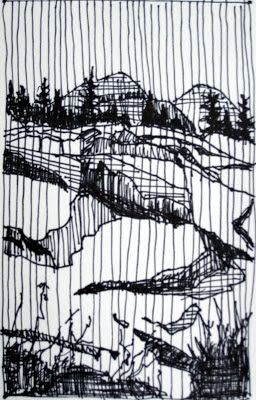 I think it could be a wonderful painting, but I might perch the fellow below on a rock to create a size reference. 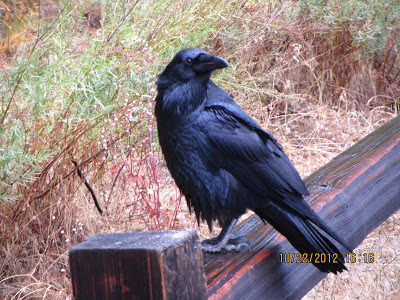 And then we saw Half Dome. 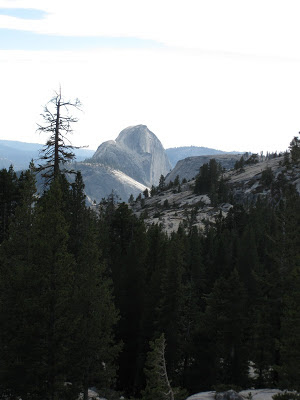 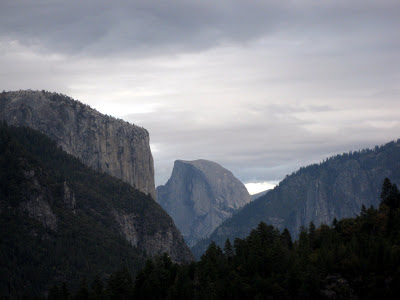 I began to realize that these views are the iconic images representing the National Park System for me. I felt I was seeing all this country, not only through my eyes, but also through the eyes of John Muir, Ansel Adams and Teddy Roosevelt.

Even where we stayed, Wawona Lodge built in 1876, evoked the spirit of times past, when people traveled from all over, with great difficulty, to view the wonders of this place. 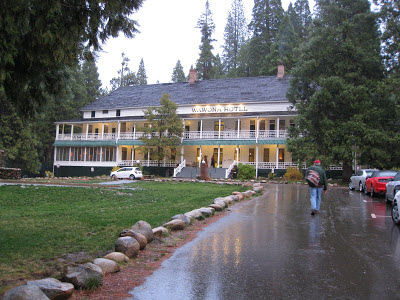 We spent three nights in Yosemite Park. The first day we had rain and sleet fall on us as we walked through the sequoias. I remember a photo my parents took of me as a toddler looking like an ant by a giant redwood, so I asked Mike to take a picture of me at 63 years old looking like an ant. 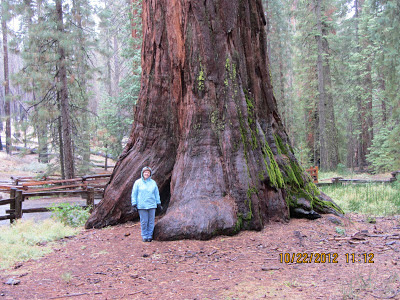 We spent the following days in the Valley itself. Guess who ignored the warning sign, "Danger: climbing and scrambling on rocks and cliffs is dangerous. . ." 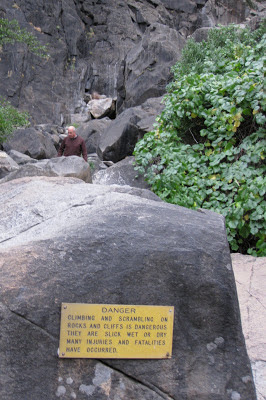 We had one lunch at the famous Ahwahnee Lodge (built in 1926-27). We were too cheap to stay overnight at the rate of $450 per night. Also rumor has it that it is booked years in advance. Everywhere one looks it is amazing. The same location can totally change both visually and in mood as the clouds roll in, the light changes, and the sun shines on the rock. 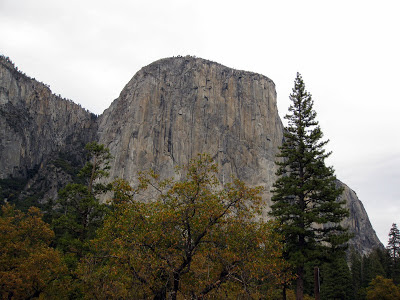 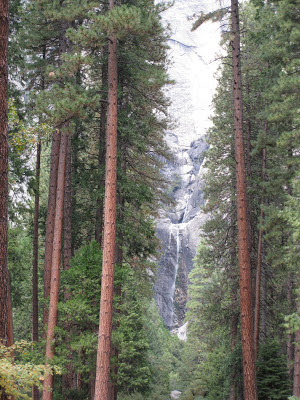 
From the drama of Nature, we drove to San Francisco for a city experience. Wanting a great place to eat close to our hotel, we searched on Mike's smart phone and found a great Italian meal at a very unassuming place just 5 blocks away. The next morning we spent at the de Young Museum in Golden Gate Park, where we were absorbed by The William S. Paley Collection: A taste for Modernism. I love our West Coast cities. 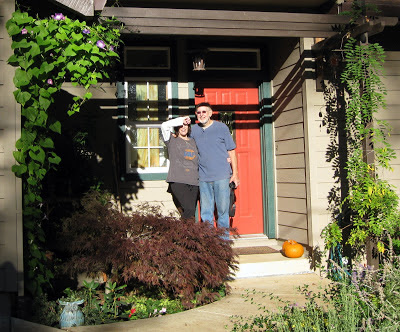 A couple of hours after leaving S.F. we drove into Forestville, CA. We had not seen our friends for a long time and so enjoyed catching up and spending a relaxing night with them. The next morning, after loading up some paintings from Hawaii that they'd had in storage for me, we headed home to Blue River. It was one of those trips with so much variety that it's taken me a couple of weeks to blog about. I spent all morning sorting through pictures and writing this blog. Maybe I should have warned you readers that this was a long one!
Posted by Margaret Godfrey at 1:45 PM