Another instance of "Life Happens"

This story starts with a tick bite.

During the birthday celebration on May 23, somewhere between several beers and our grill fire, Mike asked me to remove a tick he'd found on his abdomen. Unfortunately, I used tweezers and took only the back half of the tick. This, of course, brought forth further irritation to the bite which looked like this the next morning. 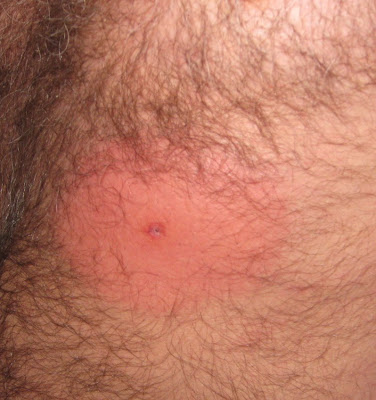 My husband Mike took the visiting youngsters on a hike later in the day and found another tick on his body. At this point, I did a thorough search of his naked body finding another live one on his torso. I moved down his leg and spotted another one on his ankle, but when I got closer, I realized it was a mole, small and dark. "How long have you had this?" I asked. "I don't know, I've never noticed it before," Mike replied.

By Tuesday morning, it was obvious Mike needed medical help to remove the rest of the tick and get some antibiotics to treat the infection. Could this develop into Lyme Disease we wondered. As he took off for the local clinic, I mention having the Nurse Practitioner look at the mole as well as the tick bite.

When Mike came home, he had antibiotics to treat the bite, and a hole with a stitch on his ankle. The N.P decided to remove the mole and have it biopsied, not because it looked troublesome, but because it was unique to his body.

So, do you believe things happen for a reason? Does the Universe/God/something beyond us humans put forth opportunities, intervene, give us chances to avoid disasters? Read on.

Yesterday Mike got the news that the mole was melanoma, caught small and early. He will have a larger chunk taken off to make sure any of the bad cells are removed. Also he will have 4 other moles removed, just in case.

I shudder to think how long it might have been before he (or I) noticed the mole. It could have been growing and spreading had it not been for that tiny insect that burrowed under his skin.

Once again I am forced to ruminate about the fact that sometimes something we think is really unfortunate (like an infected tick bite, the possibility of Lyme Disease) is actually good fortune. We found a scary cancerous spot early.

Please keep us in your thoughts, and I'll send updates.
Posted by Margaret Godfrey at 4:52 PM

Hi Margaret,
I will keep you both in my prayers & send positive thoughts your way! What a good thing he went to get the bite checked out!

Good For You,Margaret!
So glad for you and Mike.
Your positive
evaluation of the series of
events convinces me that
you have positive energy
surrounding you already.
Wishing you both the best
as Mike heals.
Hugs,
Linda

I'm glad that he was seen by a nurse practitioner. We tend to notice things like that more often than doctors do because we tend to spend more time with patients. I hope that it turns out well for your husband.