A Cougar, Small Surgery and a Painting

This past weekend Mike and I decided to take a hike along the beautiful McKenzie River. We had our granddaughter, Angelica, with us and she was all into seeing waterfalls. Our destination was Sahalie and Koosah Falls. http://www.oregon.com/hiking/sahalie_falls.cfm
The drive is about 30 minutes from our home. As we drove up the highway (somewhere beyond the Robinson Lake Rd. for those of you who know the area) a full grown cougar ran across the road in front of us. We were all stunned. The cat was nearly as long as the lane of the highway from the center line to the fog line. His tail was massive, much longer and fuller than I expected. His fur was dark and tawny. He never looked our way, he simply loped from the woods on one side of the road and disappeared into the woods on the opposite side. It was a thrilling sighting.

I told Angelica I'd waited 60 years to see this fabulous occurrence. Since she's only 7, she may have more wild cougars to see. Mike has seen only one other after spending more than 30 years in the woods of the Northwest, to give you an idea of the rarity of this sighting.

Yesterday Mike and I spent a full day in town seeing the doctor who will take more tissue from his ankle to insure the melanoma cells are removed. The doctor continued to tell us the shallowness of the melanoma indicates a very good prognosis. None the less, getting prepared for this minor surgery entailed a chest x-ray, blood workup, etc. all at another location. By the time we headed home it was after 5 p.m. and we were wiped-out. Tomorrow, he'll have the procedure on his ankle and on Friday he will have 4 other moles removed which is totally precautionary. It's also about the only moles he has. So when we get the news that all those biopsies are negative, we will breathe a great sigh of relief.

This event has made me more aware of my own very mole covered body. Maybe it's time to have my body scanned. Maybe you should too.

I'm including two images of the painting "Sound Bites." The first is the image that was in the Watercolor Society of Oregon show.

I was encouraged by a fellow artist to enter it in a national competition, so we talked about how I could give the painting even more impact. The second image is of the painting after a little editing. Can you spot the changes? 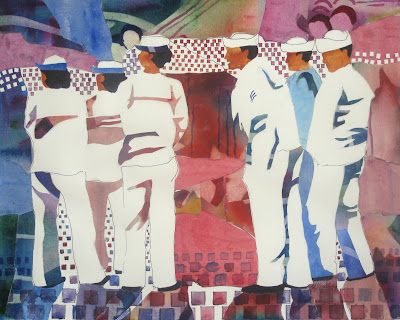 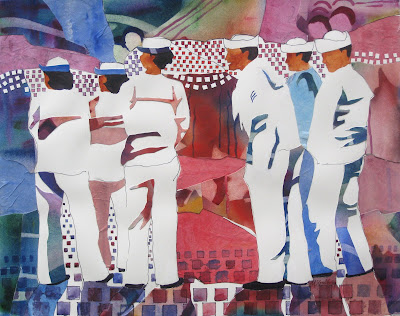 Posted by Margaret Godfrey at 9:17 AM

My thoughts are with you...hope all the tests turn out well.


As for the painting...looking good...but maybe the little white slice between the guys and gals could be just a little wider? LaVonne