September---A Raft Trip down the Rogue River, A Painting Heads off to Hawaii, and Hannah Grace Carter is born

September has been quite a month! It has flown by and many different aspects of my life have collided, making the month memorable.

First we had a five day white water raft trip to prepare for and experience. This year we invited our friend Julie for her second trip, and Joe for his first. Julie we met in Hilo, Ha, and she has since moved to New Orleans. Joe is from L.A. Although they don't have much rafting experience, both are enthusiastic volunteers who pitch in whenever/however they can. 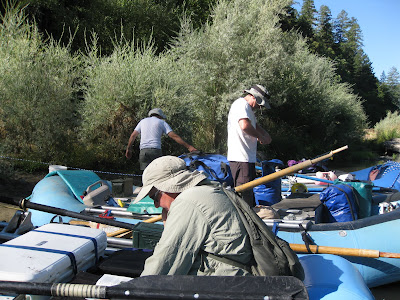 Preparing for the morning launch.

Julie arrived two days early and we spent an entire day in the kitchen as Julie prepared a dish to trump her last year's jambalaya. This year it was shrimp in picant sauce, certainly equal to the jambalaya. And then her cookies and salad to accompany the main dish were to die for! 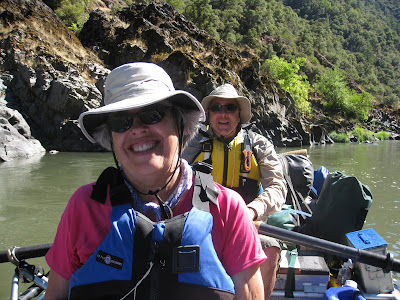 Julie and Mike on the river.

Our group consisted of four rafts and one hard shell kayak. We planned a longer trip, 5 rather than 4 days, which allowed for a layover day. That sounded like a great idea until we got a week of fall rain prior to the trip. Sitting on a raft or in camp is not nearly as fun when one is wet and cold. However, the morning of our trip, the weather changed to a lovely, sunny day and that weather continued throughout our trip. 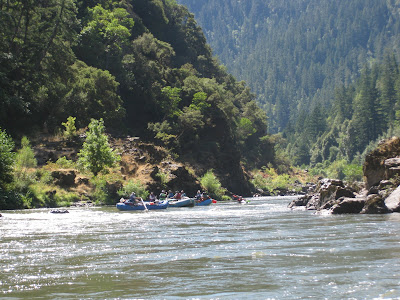 As always, the Rogue River is rich in wildlife. We saw more Great Blue Herons than ever, and they were not shy. 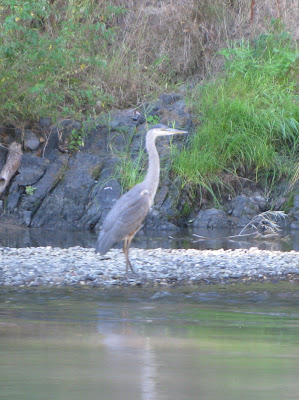 David (Mike) worked diligently on his skill with a sling, in preparation for meeting Goliath (bear), which never happened. But look at the rich stock of ammunition he had! 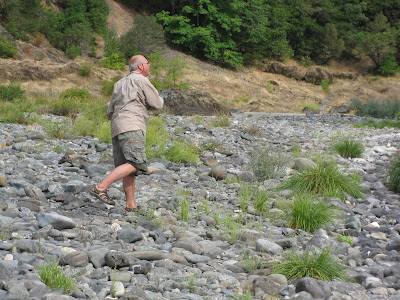 There are many things I really enjoy about a fall trip, one is certainly the autumn light, lower and richer in color. I especially like the morning light. 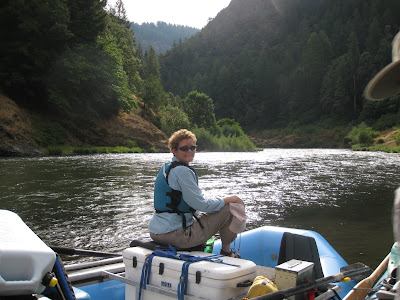 My niece Cathy, back lit with morning light.

Although no one in our group wears a helmet, it is not a bad idea. Our friend Joe came prepared for adventure and any mishaps that might occur. 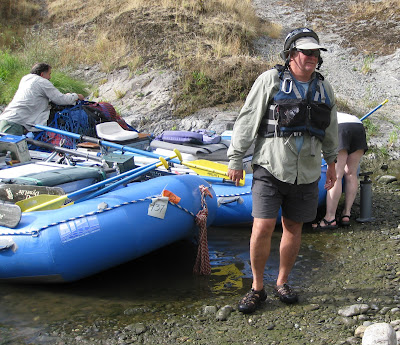 And were there any mishaps, you might ask? We did not flip, or even have a tube go underwater, but Mike did once again come up against his personal Rogue River Nemesis, Mule Creek Canyon. Or should I say #@$$%# Mule Creek Canyon. This is a stretch of water where the river narrows into a long rock cliffed canyon. The hydrolics are amazing, unpredictable and have parts named the Coffee Pot, because you go in and get percolated!

On the next to last day, we got on the river and had the two hardest parts of the trip ahead of us: Mule Creek and Blossom Bar. This means that all rowers start getting pumped full of the adrenalin necessary to maneuver the large heavy rafts through these class IV sections. Mike is always particularly nervous about Mule Creek and this time was no different. We were third in line (the kayak and its paddler were on a raft through this.) We watched as the two rafts in front of us traveled through the early sections and it looked like a pretty smooth ride for both.

We inched our way forward into the most turbulent part of the canyon. Suddenly the river god reached up with a hand, grabbed the raft, and nailed us to the canyon wall! It was incredible, because here in this amazing water, we were just still, not moving anywhere. There was a slight sideways to and fro, but the stern was stuck, right against the wall. Mike pulled on the oars with all his might for several minutes, but nothing happened. I got a bit alarmed when he announced he was taking a break! How the heck do you take a break in a situation like that? But soon I heard him making the most primeval growl imaginable. I felt,through the raft floor, his entire body push against the water with the oars and finally we broke loose. Later we talked about how long we were paralyzed by the river--the guesses were anywhere from 3 to 30 minutes. No one was watching a watch!

But we weren't done yet, we had Coffee Pot ahead of us. And our rower was almost tapped out. As luck would have it we had to take a spin or two there before we were done and on our way through the last milder part of the canyon.

I'm including a link to a video of someone else's ride through Mule Creek, in case you are interested in seeing the place.

It's hard to tell how much that experience is going to effect the rower's ability to do the next rapid, Blossom Bar. In this case, Mike did an incredibly clean run through Blossom Bar. We didn't kiss a rock!

On the last day, on a wide smooth stretch of river, I took this photo of this lone tree, attached to a rock. Once again we said goodbye to a wonderful trip through the Wild and Scenic portion of the Rogue River. 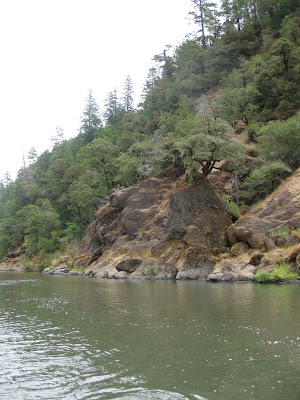 Arriving home, I had a letter of acceptance from the Hawaii Watercolor Society. Last month I sent off two digital images, and my painting "Jungle Ginger" was chosen for the HWS Open Show. Inserted into the letter were comments from the juror, Linda Kemp. This is a first for me and a very nice touch. I think every artist wants to hear why a painting appeals to the juror.

"Both of these paintings are interesting and dramatic! The broken shapes, pattens and use of texture are quite exotic. My choice was influenced by the rich darks and less defined forms in Jungle Ginger." 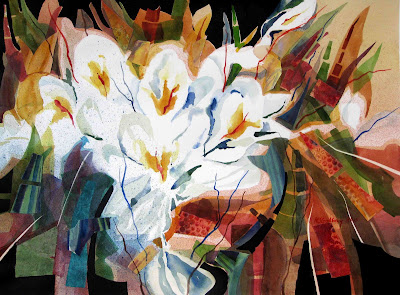 My month is ending meeting a new grandchild, Hannah Grace Carter. My younger daughter had an induced labor, so Mike and I were able to be there to help out with the other two children while Rachel and Josh concentrated on the new baby. I'm staying here for a few extra days while Rachel and Hannah rest up and the rest of the family adjusts to this change.

Hannah is perfect in every way! 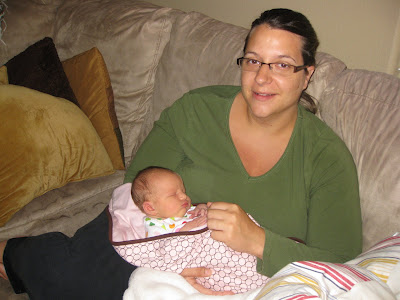 Rachel and Hannah this morning. 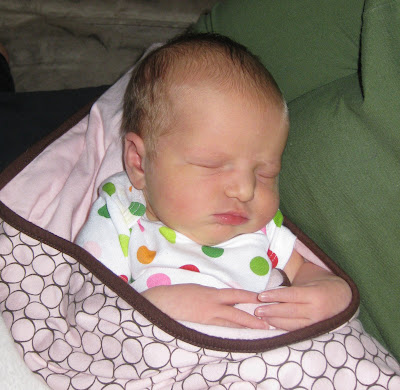 Thank you, Ruth, for the idea to use a dark color rather than black to add the punch to this piece. Although, I see that on my monitor the darks look almost black, they are a dark maroon/purple. The black was too harsh, but the added darks enhance the playfulness in this painting.

Something I did differently here was to use watercolor paint rather than acrylic for the added darks. 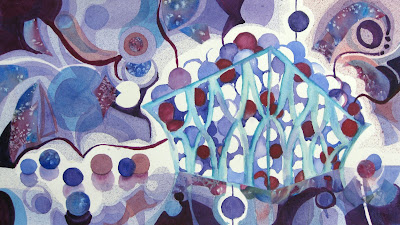