Who could resist this angel climbing a ladder up the side of Bath Abbey? 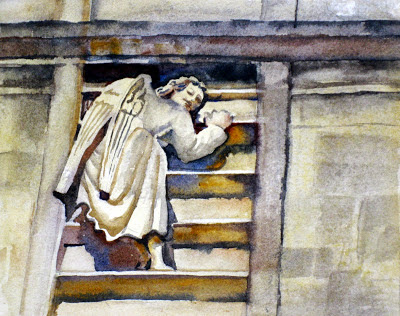 
My sister Barbara joined me on a 3 week trip to Europe. A large part of the trip was a cruise paid for by my teaching watercolors to the guests, but it started with short jaunt to England.

We had a frustrating start to the trip as our plane taking off from Eugene was delayed by nearly 6 hours. Sitting in the Eugene Airport at6 AM with an unknown departure put us on edge. Would we make our flight to London? Nope. Would we be able to make it to Bath, England for a prepaid hotel? Only if we could get to San Francisco by 7:00 pm. Tired and worn down, we did make it to S.F. to catch the last flight to London and were greatly relieved to be airborne for the U.K., with a great hope for catching some zzz's. 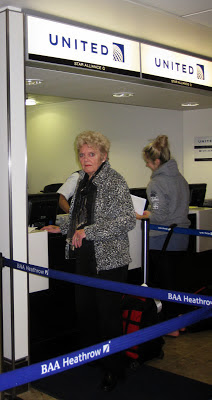 "My suitcase is where?"


Thinking we were over our travel frustrations, Barbara was in shock to find out her suitcase was still in San Francisco as we were preparing to leave Heathrow for Bath. We were told it would be delivered to Brocks Guesthouse in Bath the next day. "Can I borrow undies and a nightgown?"

We had a great treat waiting for us as we stepped out of the airport. My sweet husband had gone online and ordered us a car to drive us to Bath, about a 2 hour drive. Since it was probably the one and only time this will ever happen, I took a pic of our driver holding up a sign with my name. We happily got into the vehicle and promptly slept through most of the drive. 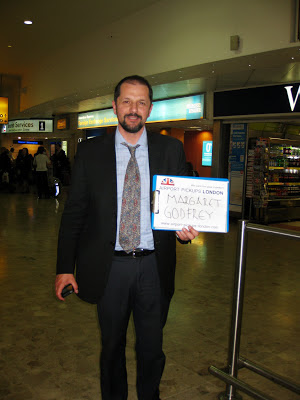 Luckily, we arrived in Bath by late afternoon and were able to sight-see for a few hours. This is where I fell in love with the climbing angel in the blog opener. This Abbey Church was built in 1499 by the Bishop of Bath who, as the story goes, had a dream of angles ascending and descending into heaven, hence the decorative sculptures. 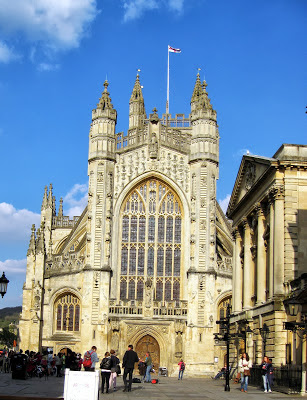 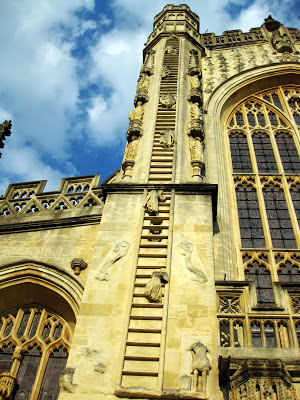 Bath is a beautiful town with more to see than the Roman Baths. Here is a shot of Pulteney Bridge crossing the Avon River. 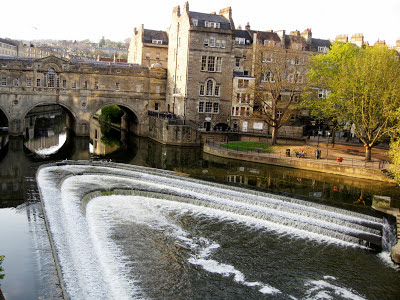 The Roman Baths were built 2000 years ago and were a feat of great engineering. Many decorative features have been recovered and are displayed throughout the Museum. 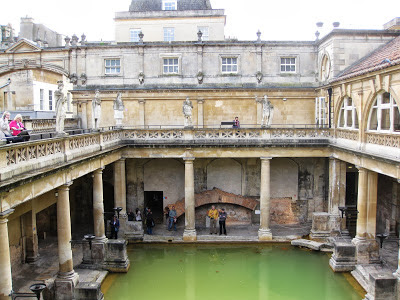 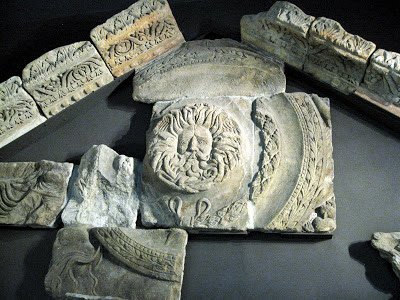 After a wonderful Indian dinner in the basement of a basement, we were happy to get back to our B & B with the determination to catch up on sleep.

I had booked online a tour (Mad Max) of Stonehenge and some quaint villages for the following day. I have to say, it was a perfect way to spend the one day we would have in the area. Not only did we learn a lot from our tour guide, but we got to see a lot of English countryside. New to me info, Stonehenge existed well before the Celts and their religious order, the Druids, arrived in the area. 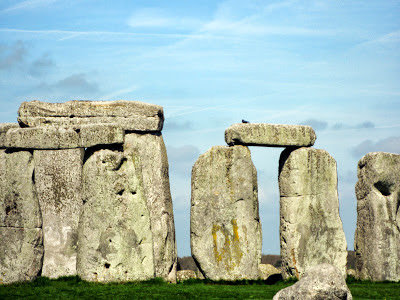 We also visited Avebury, another much larger circle of rocks. This was constructed in the Neolithic period, but was partially buried by the Church in in the 1200's, to be resurrected in the early 20th Century. 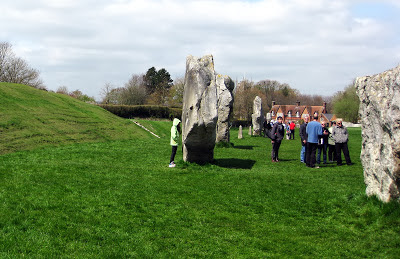 Our day with Mad Max continued with visits to some very old and charming villages. First was Lacock (lay-cock) where some scenes inHarry Potter and Pride and Prejudice have been filmed. 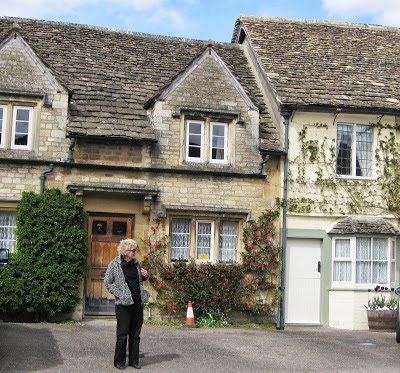 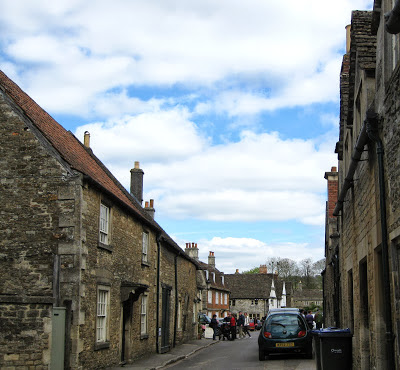 Our final stop was in Castle Combe, population 350. It has also been the backdrop for films such as Warhorse. 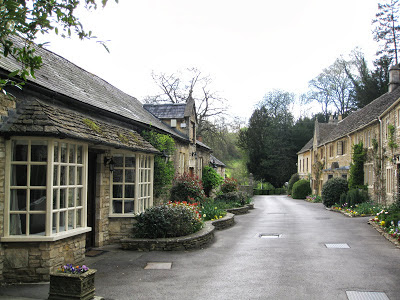 After our full day of sight-seeing, we ended our day with another wonderful meal and a good night's sleep. We wanted to be well rested for our trip to Southampton where we would board the Independence of the Seas.
Posted by Margaret Godfreyat 9:07 PM

Anonymous said...
Margaret..It looks like you all had a good time..beautiful weather and places. I love the angels on the ladder to heaven!

Posted by Margaret Godfrey at 7:25 AM No comments: 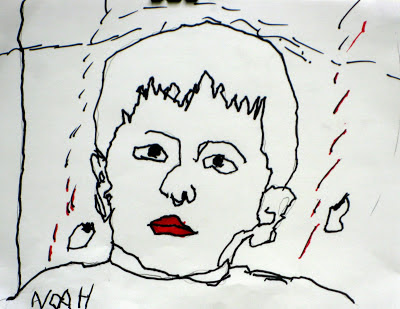 The artist has to look at life as he did when he was a child. If he loses that faculty, he cannot express himself in an original, that is, a personal way. (Henri Matisse)


Today I was trying to think up an art project that would work for both my 5 year-old grandson and my 8 year-old granddaughter. Using a light box seemed like something they could both use for tracing, and sharpies are always fun no matter what age. I put those two activities together with the concept of creating a self-portrait. To my delight, the children rose well-above my expectations. Noah's self-portrait is above. His less steady hand and creative framing made his art so authentic. Then his idea of coloring his lips red, really perfected this sweet picture in my eyes. 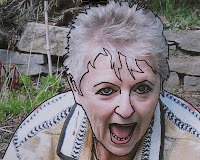 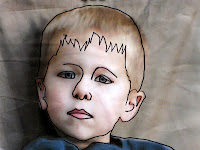 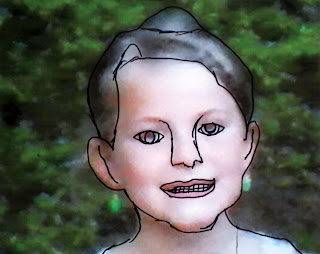 The first step was choosing a photograph from the many we have on the computer and printing a full sheet. Next we did a simple outline of the head, hair, facial features and shoulders directly on top of the photo.

The next step was setting up my large light box on the studio floor where we could all sit around and trace the felt-tip markings on our photos onto nice drawing paper. We did this in pencil, so any errors could be erased. After we had our pencil drawings, we went over the pencil lines with felt-tips.

The final part was decorating our portraits, making frames or designs or patterns. This was a very unscripted part and the children followed their own ideas. 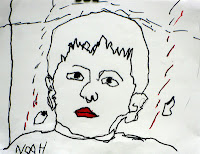 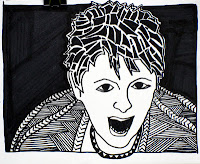 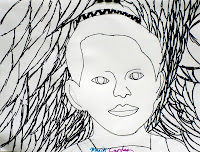 Marin enjoyed this so much she decided to do another portrait using the same method, but this time using watercolors to finish her picture. 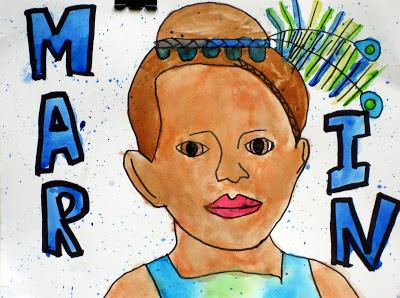 At the end of the day, we played around substituting our portraits for our heads in these photos. 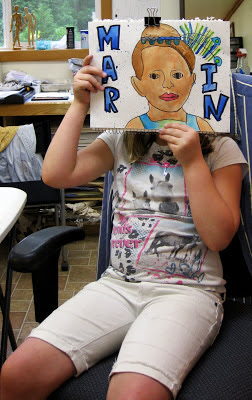 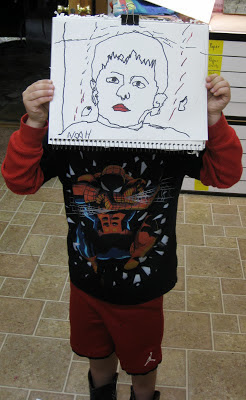 May 2013 Trip, Part III--Many Ports then Back to England

My sister Barbara and I visited many ports on our cruise leaving from Southampton, England. We first hit a port in Spain, then on to Portugal and the Canary Islands before returning to Portugal and Spain (stopping at different ports) then ending up back in England. These towns and cities were historic as well as beautiful. They all had commonalities: 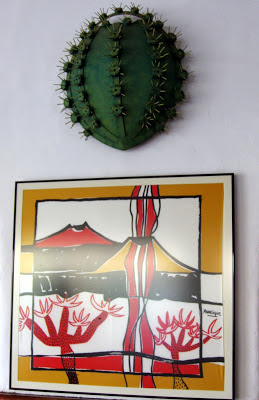 Lanzarote, Canary Island
This island is unique among the Canary Islands. It is a volcanic dessert island, with almost no water or soil. It's development was greatly influenced by the Lanzarote artist, Cesar Manrique, who insisted on a limit to building height, that all buildings be painted white with blue or green trim. His art included "wind toys," paintings, sculptures, and an incredible cactus garden.


I have to admit that the rest of the Canary island ports were less distinctive and flowed into one another. A few adventures stand out, such as when an ATM ate my debit card. (Note to travelers: always take more than one card and notify your banks about your travel plans.)

The islands and ports are beautiful none the less and Barbara and I greatly enjoyed our taxi tours. Rather than going on the cruise tours, we chose to find drivers who spoke a bit of English and travel on our own. 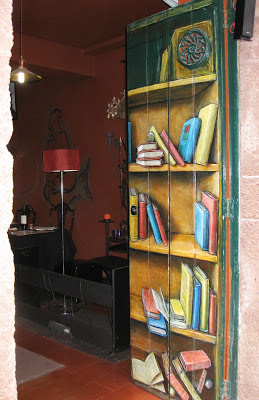 The doors in the historic area of Funchel, Madeira were painted in 2011 during a project to promote art in the city.
In a small fishing village we visited a very humble (from the outside) chapel dedicated to the fishermen in the area. Inside was this fabulous painted ceiling.


La Caruna, Spain
In our last port, La Caruna, we celebrated Barbara's birthday. The day was rainy and we were fairly worn out after our 2 weeks of port-hopping. We settled for a nice lunch and a walking tour.


We wrapped up our trip with 2 days in London. We saw "Wicked" and "Billy Elliot," both in theaters within walking distance of our hotel. Our last day we spent at the Victoria and Albert Museum which is a truly amazing museum.

What a wonderful trip!
Posted by Margaret Godfrey at 8:20 PM 1 comment: