I started this painting with a concept. I wanted to combine natural rocks with petroglyphs (rock carvings) with an Asian look. Here's a quick sketch of my idea. 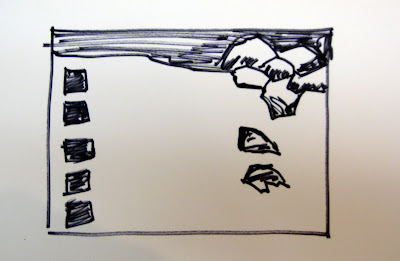 I began the painting by getting my paper wet and putting on a loose acrylic underpainting. It doesn't look like much, does it? 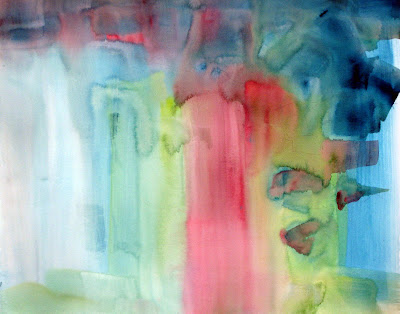 I knew I was going to add a lot of texture for the water and the rock bank at the top of the painting, so I cut out rock shapes from contact paper and placed them on the right side of the painting to reserve those colors. 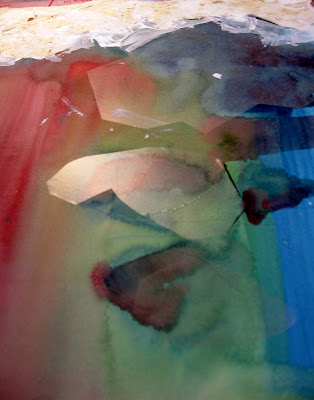 Next I added rice paper and gesso to the top, and applied gesso to the rest of the paper, using a handmade tool (notched credit card) to create a flowing water effect. Some of the underpainting is revealed in this process. 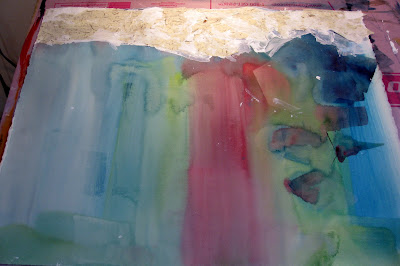 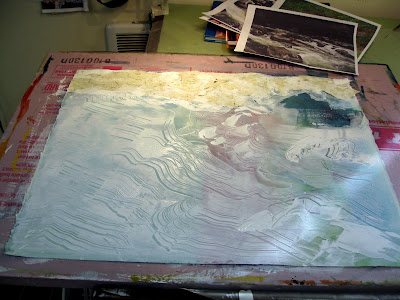 After all this dried, I started applying paint again. Watercolor paints will work on this surface, as will acrylics. Many things went into creating the water. I watered down my pigments and poured them, then rocked my paper around to move the paint the way I wanted it to flow. I used inks, watercolor pencils and pastels. Then I made more colors using white ink and acrylic pigment. This part was really fun.

At this point I have peeled the contact paper off, and painted more structure to the rocks and just cutout construction paper squares to get a better idea of how it would all work out. 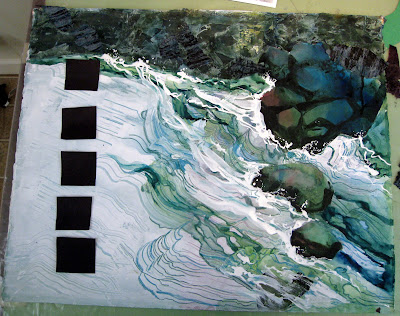 I added some warmer colors--violet and burnt sienna. I added collage pieces to some of the rocks and created more defined rocks at the top of the painting. I created my own petroglyph symbols for animals I see on the river, as well as a water symbol. And here is the finished piece: Sing me the Legends. 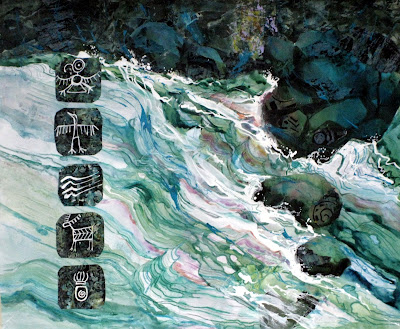 A Trip to New York City

This was an anniversary trip of sorts. Mike and I met in NYC (Greenwich Village to be exact) almost 43 years ago, got married 42 years ago and haven't been back to New York since. After all these years of talking about returning, we finally did. It was a fairly spontaneous trip with a desire to stay in G.V., wander our old haunts and do touristy things on a small budget.

The budget was what led us to finding an alternative to hotels. We rented a studio apt. for about $170 a night. Here's a photo of Mike in the entryway to the place on Sullivan Street. 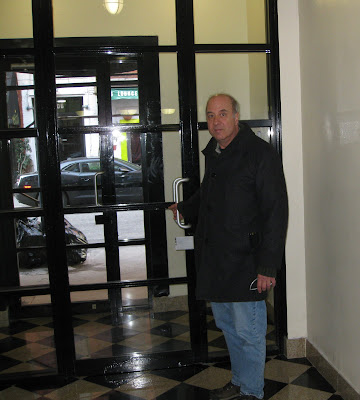 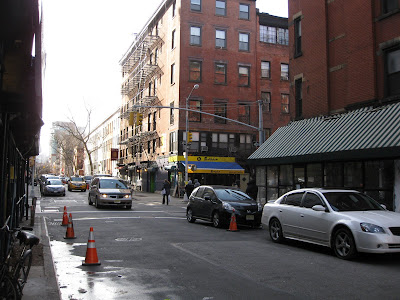 Our first day out, we decided to take the ferry ride out to the Statue of Liberty and Ellis Island, which leaves from Battery Park, near Ground Zero. 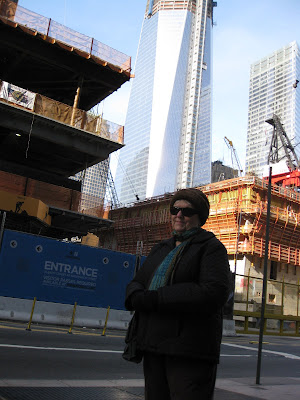 Seven buildings were destroyed that day. As you can see, reconstruction is happening. Just across the street from the World Trade Center, this old church and cemetery were unscathed. 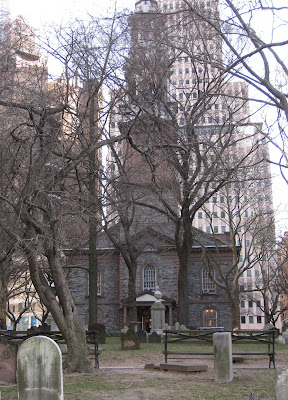 Our trip out to the statue and Ellis Island was ideal in that the sun was shining, but the temperature was 21 degrees F. I'm so glad I bought this winter hat. 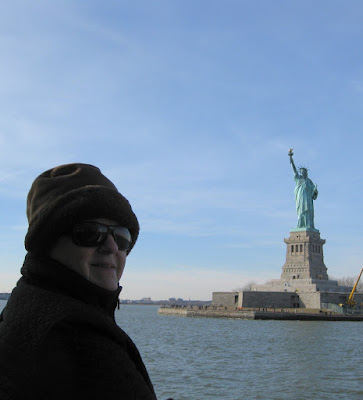 Our second day we started our string of museums with the Guggenheim. The "Void" of the museum was filled with Maurizio Cattelan's retrospective. I had never heard of him, but at age 51, he has retired from the conceptual art world and all of his work is hanging in the Guggenheim. 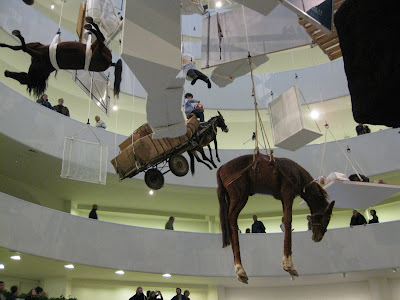 After several hours in the gallery, we were happy to walk across town through Central Park. 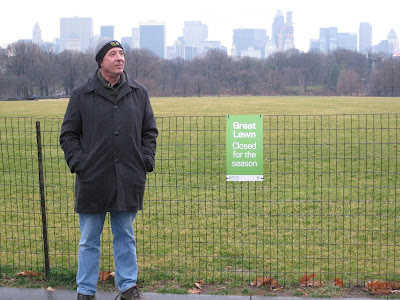 The rest of that day played out as a perfect New York day. We got frustrated trying to find a coffee drip cone in the huge stores on 34th Street. Then we hopped on the subway back down to Washington Square (definitely a landmark for us from our courtship). In Washington Square, while I was taking a photo of Mike and a musician, a man and woman started a screaming fight with each other. When he threw her down on a bench and jumped on her, I yelled (at a safe distance), "Do you need help?" After yelling the same question 3 times, he got up and they stumbled away from one another. She gave me a weak "thank you." In my back story of this couple, this kind of event occurs regularly, but I felt satisfaction in stopping this particular round. 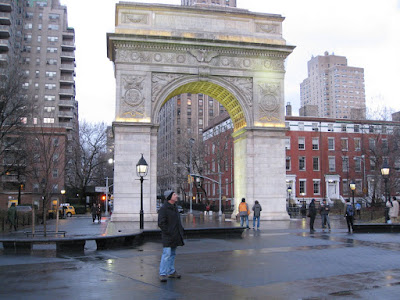 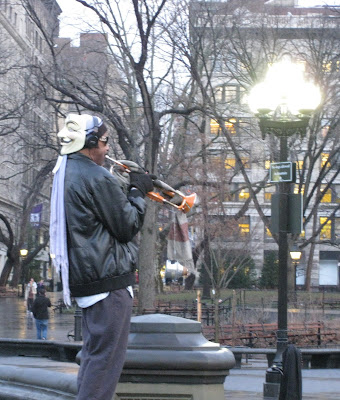 When it was dark, we returned to our apartment to find the street taken over with trucks and lights and catered food tables. They were filming "Law and Order: SVU" right there. 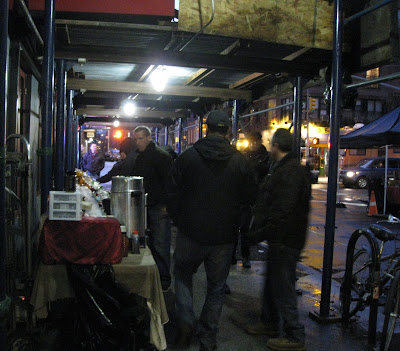 What a lot of NYC crammed into one day!

While in New York, we went to two Broadway plays--"Godspell" and "Priscilla, Queen of the Desert." While I enjoyed both, "Godspell" was by far my favorite. To make things even more fun, a couple days after seeing the play, we were having a midnight drink in a small bar near our apartment when one of the actors from "Godspell" walked in. We bought her a drink and talked for an hour or so. Great fun! 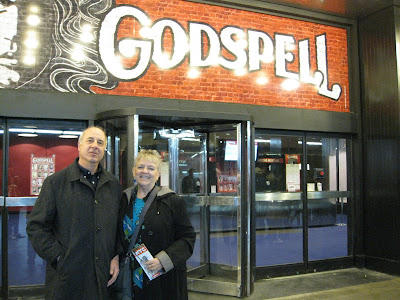 Our further adventures included going to the top of the Empire State Building. Did you know that at the time it was designed and built, that spire at the top was intended for docking dirigibles. In the design drawings at the ESB, they had illustrated people descending from the blimp in elegant clothing to the roof of the building. With the wind and and weather and the end of use of dirigibles, it was, of course, an abandoned idea. 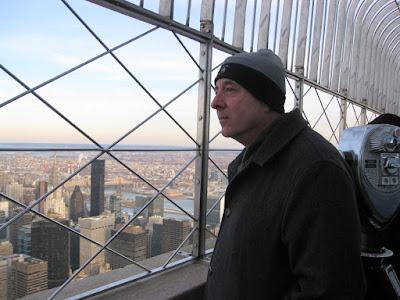 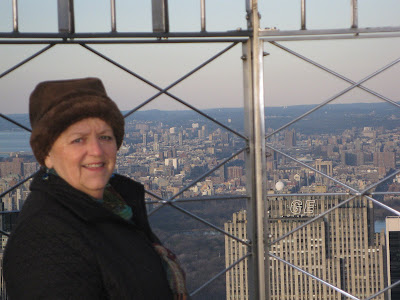 Of course, we went to more museums, the Metropolitan Museum of Art and the Museum of Modern Art. Here I am with a painting by Matisse. 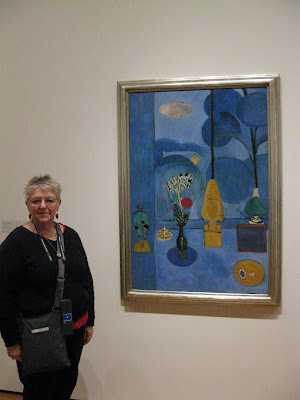 We visited other landmarks such as Grand Central Station. Although I'd been there many times in my youth, I'd forgotten how vast it is and how the people scurrying around to catch trains look like ants. I'd also forgotten the beautiful ceiling of constellations. 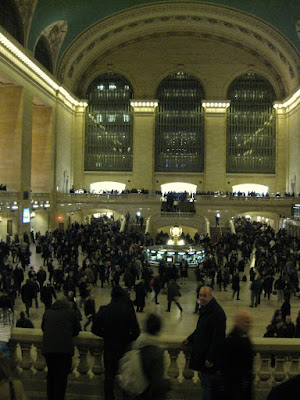 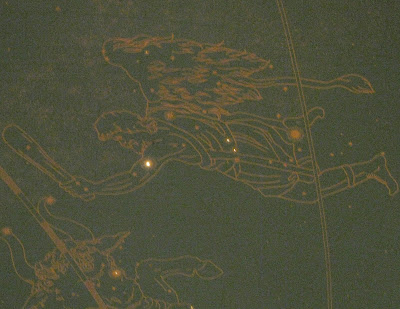 As all good things must do, our week in NYC came to an end. Although we had endured most days in the mid 20 degree temperatures, there was no snow until our day of departure. Isn't that a sad scene-- Mike pulling our bag through the snow to the subway. 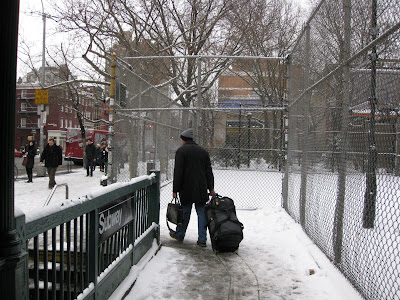 More Before and Afters

I'm still working on the 4 pieces I'm planning on sending off to various competitions. This is the week to make the changes and make decisions about which painting goes where. Some of the changes seem so minor, yet I've found that the little improvements: additions, subtractions, opening up an area cleaning up a messy spot can make a real difference.

River Strata--The changes in this piece are subtle. There is more white raining down on the bird and the top of the wing has more white. At the bottom of the wing's feathers where the inside of the wing and body attach, the area has been softened. Finally, I broke through the white line a bit on the left-hand side. 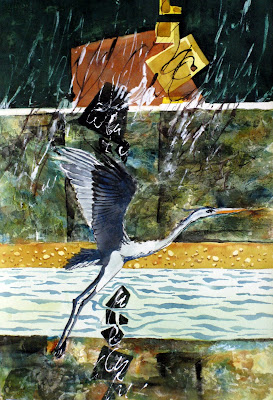 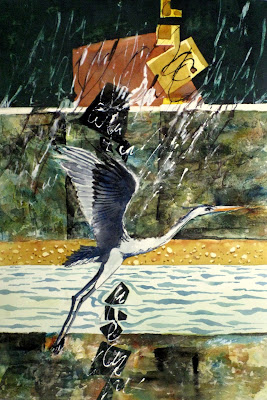 Food Web--When my friend, LaVonne Tarbox Crone described the heron as being in a cacoon, it was easy for me to see how to open up the space around the bird, and use the mysterious petroglyphic symbols as the space fades out into the surrounding, more defined areas. Again, it's not a huge change, but the piece seems even more etherial to me. 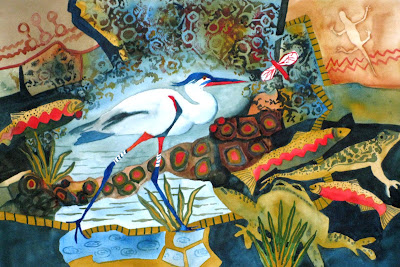 Cross Section: Deep in the Rogue River Canyon The changes to this picture are slight. I've lighted the edges of the slopes on the dark, left-hand side in order to make the distinction of each slope more visible. I also took the gold color further out at the bottom of the large rocky shapes, connecting the colors more.

Cross Section: Deep in the Rogue River Canyon Before 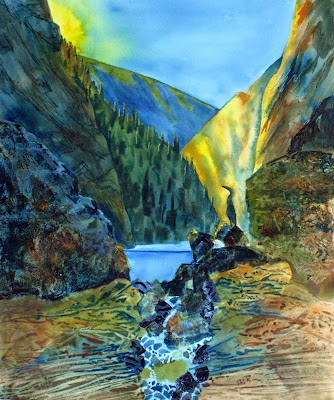 Cross Section: Deep in the Rogue River Canyon After 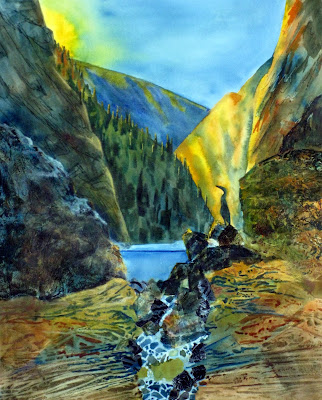 Now I have to think about the strength of each painting: Convocation (changes made in previous post), River Strata, Food Web, and Cross Section: Deep in the Rogue River Canyon . I'd love to hear what you viewers think. I'll be sending off entries by Friday.
Posted by Margaret Godfrey at 12:13 PM No comments: