Creating a Body of Work

My blogspot hit a dry spell through the holidays. Not only was there the snowball effect of Thanksgiving, Christmas and New Years, Mike and I tied on a 50th Anniversary Celebration and a "honeymoon" to Costa Rica. However, I have continued to work on my current body of work, Teach Me.

It is hard to know when to release images on a public stage such as facebook or a blog. I have been building on this idea for some time now. First it was a more general topic, women's issues. 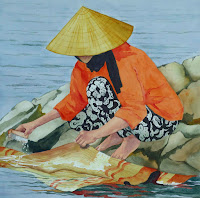 Then I zeroed in on the thought that the bigger issue is education.  Education will lead to equality, empowerment, employment and self-confidence. When women have the opportunity to become educated, not only do their lives improve, but the entire neighborhood, country, and world improves.


I started by looking at a list of the ten countries in the world where it is most difficult for the female population to get an education. But then I started opening my eyes to populations in the United States that have less access and opportunities than more privileged areas. (Preachy, but true!) This series can go on and on, but I want to share a bit of this body of work today, starting with the most recent. I am posting 4 of 14!
(Read my last post if you are interested in my artist's statement about these paintings.)


I have begun to enter some of these works in watercolor competitions. I don't know if they have a stand alone power, but they come from my heart and soul!