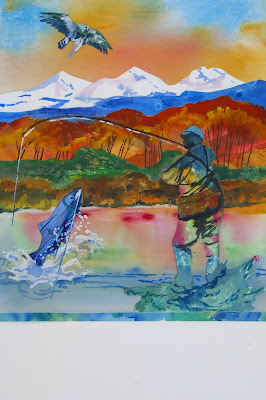 Since returning to Oregon, I heard that the McKenzie Arts Fall Festival was taking submissions for the poster advertising the events. Of course I do have transparent watercolor paintings of places on the McKenzie with a fall theme, but I thought it would be fun to create something new. I wanted to come up with something bold and graphic that also portrays the McKenzie River. I don't think a poster is the place for subtleties, since you are trying to attract immediate attention.

I had a totally different concept when I went out to the studio. I was planning a scattering of images on bold squares--a covered bridge, a row of salmon, an osprey, a drift boat, etc. But as I looked at my pile of "failed paintings" ready for rebirth, the poster sort of created itself out of bits and pieces of paintings that appealed to me. I cut the fisherman out of a flower garden, the Three Sisters foothills out of an abstract landscape, the salmon, the osprey and fish, and the fall trees, all out of paintings. Then I put watercolor washes on a half sheet of watercolor paper and let it dry. The components of the painting began to take shape on top.

As I put the fisherman in place, I saw how almost transparent he was. Although not my intent originally, I liked the idea that he (humans) are the transistional piece to this scene. The natural elements have been here for ages and with luck will continue to be here. The salmon, the mountains, the osprey are all more solid and tangible elements. To finish the piece, I painted with both watercolor and gaouche to enhance the painting, making it more realistic. The final thing was the border at the bottom. The left white is for verbiage.

Again I've diverted from painting a more conventional piece, and would love to get some feedback.

Posted by Margaret Godfrey at 11:42 AM No comments: 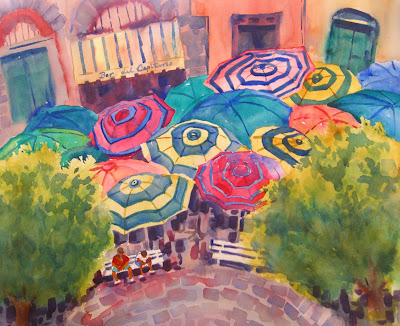 As I mentioned earlier this week, I returned to painting in a comfortable manner. I took a photo image taken from my trip to Italy this summer out to the studio and interpreted that into a painting. I added the men on the bench, colored the umbrellas in a pattern that appealed to me, softened and simplified the backyround to make the men and umbrellas pop. I created a circular pattern to the forground stone work and painted the building scewed into a fan shape to emphasize the round theme of the umbrellas. The vertical lines add some needed contrast and tension. 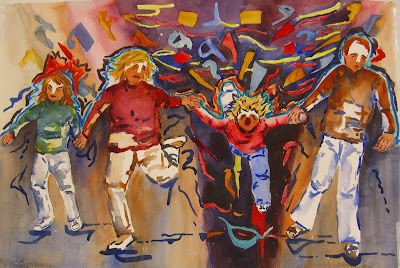 After reading a fellow watercolorist's comments, I turned the light under the "wild child" to dark. This eliminated the dual color outline that wasn't really working and made a much stronger statement about the center of interest. I softened the edges under the little person, making the dark bleed into the lighter forground. I will have a bit more confidence next time I take on a story-type painting that is based only on my own ideas.
Posted by Margaret Godfrey at 11:16 AM 1 comment:

Getting Back to the Studio

If you scroll down, you'll see I have been making my way out to the studio, slushy snow, lethargy and other obstacles aside. I'm struggling with the figure painting and have asked a fellow artist for some ideas, and will be out there this morning trying to work out the awkwardness of the painting!

Because it is so hard to paint something that personal and entirely out of my head, I took a break yesterday and started a painting based on my photos from Italy. Although, I certainly don't paint anything photorealistic, I'm very comfortable painting an interpretation of a scene.
The main thing is, however, getting back into painting on a regular basis.

On another topic...
I'm not the most technical person, nor do I often just mess around with a program. But last night, I finally woke up to the command at the bottom of Picassa that says "Blog This." So I tried it this morning--that's how I posted the last two pictures. Prior to discovering this nifty tool, I've spent a lot of time moving images, resizing, etc. Guess what, there's an easier way.
Posted by Margaret Godfrey at 8:46 AM No comments: 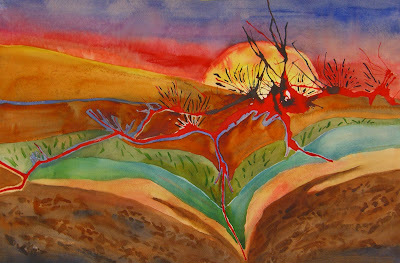 Posted by Margaret Godfrey at 7:30 AM No comments: 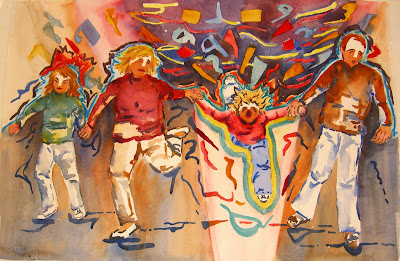 Posted by Margaret Godfrey at 7:27 AM No comments:

The Office Reveal and More Snow

Mike came home last Monday and saw his new office for the first time. He was, at first, taken aback by the color. (He's a pretty conservative guy in that respect.) But as he adjusted to it, he began to really appreciate it's warmth and felt really special that I had created this atmosphere for him. Now all he needs is a chair. 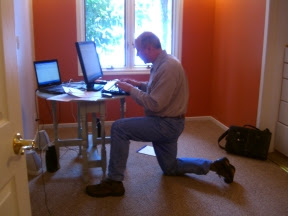 Actually, while he was home, we picked out a desk, file cabinet, and chair for the office. I'll post photos after the room is all set up. Unfortunately Mike's stay at home was very short, less than a week. This morning I put him on a plane and he is now flying back to Hilo. Boo-hoo.

His plane took off at 5:20 a.m., so I returned home, before daylight. We'd spent the night in Eugene, so we wouldn't have to leave from Blue River in the middle of the night. We'd left home yesterday with the snow just coming down like we lived in some other climate. Here's what I returned to this morning. 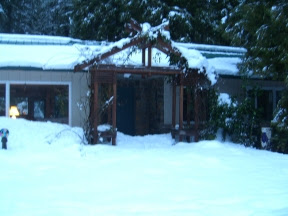 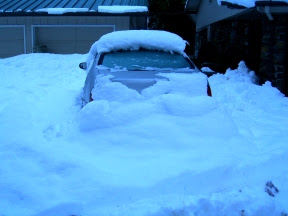 The apple tree in the front yard had succumbed to the weight of the snow and uprooted. This saddens me because it was always the tree kids could climb and hide out in. Rachel, our younger daughter, had installed wooden seats in it where she could get away and contemplate life. 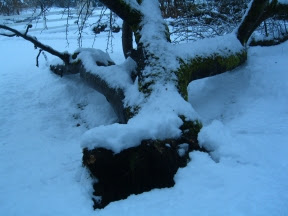 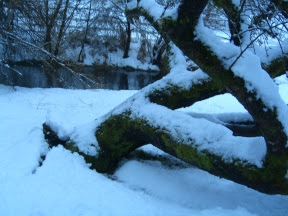 The studio looked even farther away, but a deer had left footprints out near the barn. 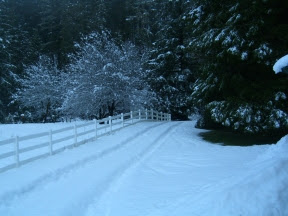 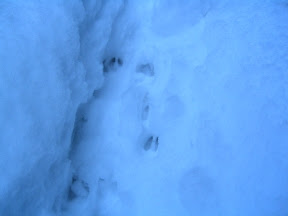 I had the task of pushing the snow off our canvas shelters where we store our rafts. I'm too short for the job. I teetered on the uninflated rafts and realized too late that the trailer wheels are the fulcrum to the trailer and I not only teetered but tottered,too, as I lost my balance and hieght advantage. I would have laughed my head off if I'd been an observer to this. 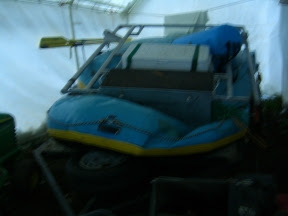 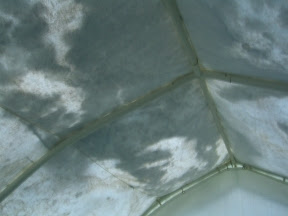 I don't think Rosy and Foxy saw the humor at all. 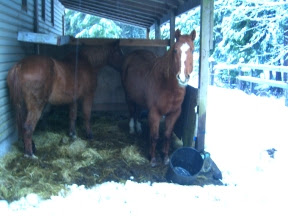 When my friends in Hilo heard we were moving back to Oregon, the response was,"Isn't it really cold there?" My reply was,"We're lucky if we get snow a couple of times a year." I guess this is a very lucky year. 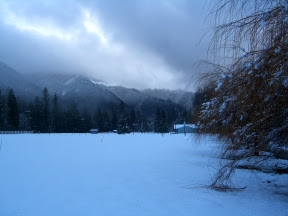 Stay tuned for an art inspired blog later this week.