"I See You" Step by Step

Earlier this month I posted a painting of a woman lying under a starry sky. Although I really like this painting--the idea, the feeling of being mesmerized by the night sky, I wanted to improve the design elements.

I visited with an art friend, Geoff McCormack, who is not only a great artist, but also a computer whiz. He put together a few images to help me figure out a less static figure and a way to make the painting less divided into half.

I took photos throughout the process of creating the second painting, so I can share my process with you. 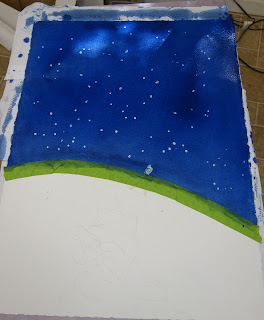 Steps 1 and 2: First I determined the curve of the earth and blocked that edge off with tape. You can not see my drawing well in this photo, but the figure has one foot above the horizon line, so I have used masking fluid to protect that and all the stars.

Next came many layers of a blue mixture (transparent watercolors) applied with a sponge to get the depth of color I wanted. After those layers were done, I added one last layer applied with a mouth atomizer to make the blue as consistent as possible. 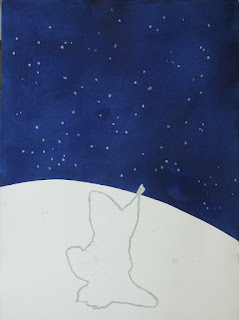 Step 3: After removing the tape and masking fluid from the stars, I outlined the figure with masking fluid to protect the edges from the texturing of the earth.

Step 4: I took a thin rice paper and applied it with white gesso to the earth area. I ripped up fairly small pieces and crumpled them as I applied them. 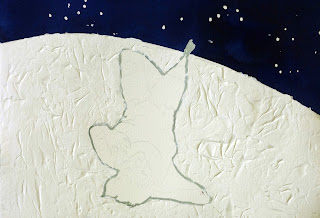 Step 5: While the rice paper/gesso was drying, I worked on the sky. I colored some of the stars and added the constellation Cassiopeia. By creating a figure in the sky the painting shows a deeper connection between the human and the universe.

I was perplexed about painting the constellation without a drawing (graphite doesn't show up on deep blue paint). It came to me that I could draw it with a white chalk pencil, then go over it with white ink.

The Milky Way was added by spraying gouache with a toothbrush. 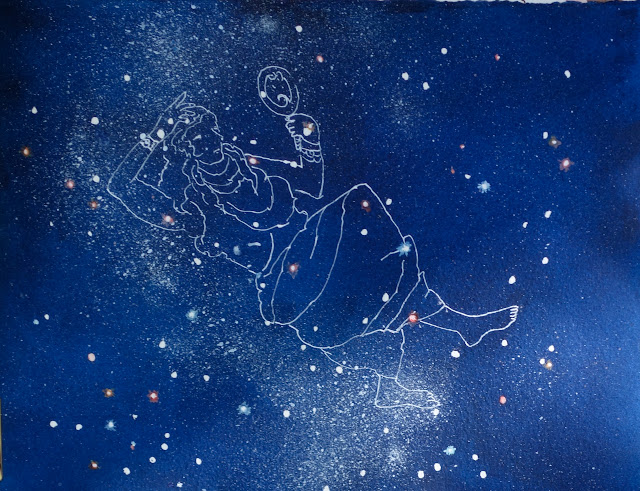 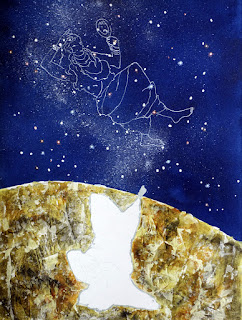 Step 6: I started painting earth with transparent watercolors. The first layers of color really show off the roughness the gesso and rice paper can create. Of course, it was too much contrast with the sky, so I moved on to painting layers with acrylic paints to unify the texturing. 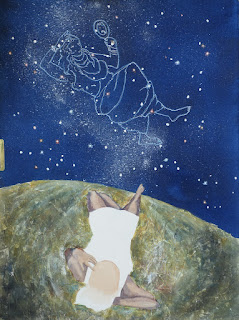 Step 7:  Because I am most comfortable painting with transparent watercolor, I moved back to my W/C palette to paint the figure. As that moved along, I starting thinking about what color to paint the nightgown. A color that was harmonious with the sky would connect her more to that, a gold would connect her more to the earth. Decision time!
Steps 8: Now on to the finishing touches. The sky figure got a second outline of a turquoise chalk, because the pure white ink did not have enough impact. The figure ended up with a split colored gown (thank you, Ruth Armitage). She is not stuck to the earth, nor is she floating up to the sky. She is connected to both. The earth's edges got darkened with the gowns lavender color, enhancing the curvilinear line and breaking up the shape a bit.

Is it done? I'm thinking of adding some more sprayed stars on the right of the sky, but I'll sit on that idea for awhile.

My followers know that I was on a trip to SE Asia not long ago. Traveling to another part of the world filled my eyes, brain and emotions with many images and ideas. In a way, being over-saturated with images and ideas can make it hard to sort out what I might paint and how I want to express it on paper.

"Priming the pump" this past week meant doing some small, crisp, and realistic paintings. I started with one drawing which I thought I would incorporating into a large piece. When I finished the drawing, I fell in love with the simplicity and lines. I decided to let it become a work on paper using pen and ink and acrylic paint. I was so happy with that first piece, that I chose two more images to treat in a similar fashion. 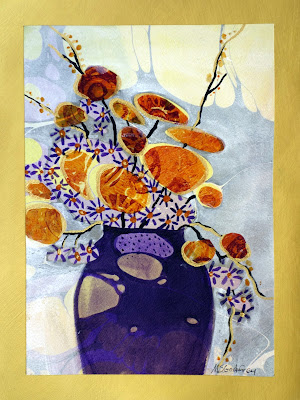 Many years ago, in the beginning of my art journey, a world renowned instructor told me that a painting I had created in his workshop was a nice "decorative" piece. Being a self-educated artist, I had a pejorative idea of what that meant My interpretation was that it was cute, sweet, something you'd hang in the bathroom. It was not the thing I was striving for.  And I did not have the guts to just come out and ask what he meant.

Over the years I have learned that it was not a condescending remark. I have attempted to get a better grasp of the meaning and difference (if there is any) between "fine" and "decorative" arts.

When I google famous artists considered "decorative" artists, the names of Klimpt, Matisse, and Tiffany come up. Many items considered decorative art are both utilitarian and beautiful. (I guess a painting could cover up a hole in the wall, making it utilitarian!) Decorative art is often associated with the Art Nouveau and Art Deco movements. "Artists drew inspiration form both organic and geometric forms, evolving elegant designs that united flowing, natural forms with the more angular contours." As always, art was moving in a different direction, letting go of some of the more traditional ideas of art--making room for modernism. 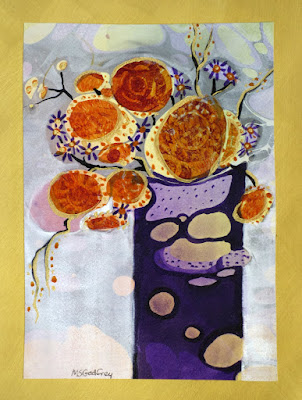 In any case, I now feel fine creating art that is more decorative. Who wouldn't want to be in the same category as Klimpt and Matisse?

Most of my studio time is spent doing what I would call fine art. I am going for that "imaginative, aesthetic, or intellectual content." I have an idea or story I am trying to incorporate into my paintings. I am typically more content oriented. This is the more cerebral me.

Other days I am just happy to create something more spontaneous and decorative. The two pieces posted here were done on previously marbled paper. Being springtime, I felt compelled to create flowers and used collage materials made with deli paper and gelli plate.
Posted by Margaret Godfrey at 1:10 PM 1 comment:

Telling My Story in Art: Titles

My friend Ruth Armitage recently created a post "My Art Means Something." Among other things she talks about choosing a title for a piece. I often wrestle about finding the right title for a painting myself.  As Ruth states, "I feel that the meaning of a painting can be one thing to the artist, and something different to the viewer." Although my work is not abstract like Ruth's, I do debate about how much information I give my viewer with a title, because I want them to connect to the painting. I want the art to bring up their own memory or spark something in their imagination.

This painting was one I struggled with trying to find the right title. Although the memory that inspired this was about being lost in a department store, looking for my mother, it really uncovered and suggested so many deeper and important ideas. I do not want to have the title limit what the viewer might feel or conceptualize.


The title that has struck the right chord for me is "She's Allowed." It doesn't really matter what this child is doing, she is just a child who is allowed to be herself! Thanks to my art friend, Sandra Neary and Elizabeth Gilbert via her book on creativity,  "Big Magic," I have come up with a title that allows the viewer to make up their own story about this painting. Please wander in and think about a time when you were a child and what memory this brings up for you. You are ALLOWED!

So now I am looking for a title for my recent painting capturing a memory from this last summer. I could tell you the story of laying out under the stars on the Rogue River, but I'd rather you think of a time you connected to the Universe via the night sky. Do you have a title for me? 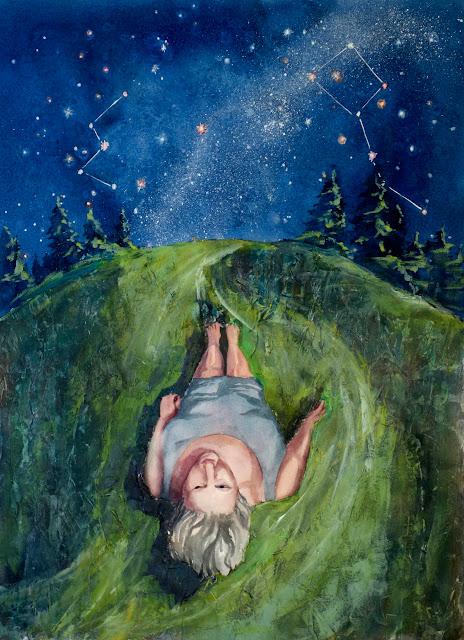 Posted by Margaret Godfrey at 6:58 PM No comments: