What If Your Friend Calls and Asks . . . Part II 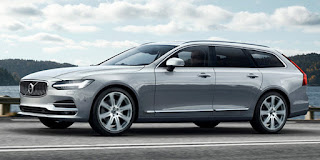 Folks have asked why we rented this big car since it was clear to all the French people that it was "too big" to be driving around in old towns and cities. The answers: we had just flown for many hours from Portland to Toulouse; we heard "upgrade" and thought "woo-hoo"; we were not thinking about the size of streets in comparison to the size of this car; we were a bit ignorant.

There were advantages, however. We had a very quiet, comfortable ride  for the approximately 500 miles we would drive through southern France. I must compliment Ruth for her driving. Her early years of driving huge farm equipment really gave her skills necessary for driving our "too big" car. 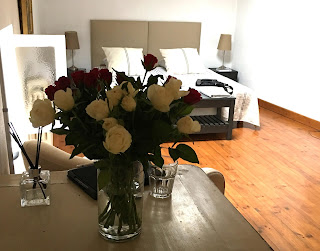 By the time we left the Fabre Museum in Montpellier, we had cemented a plan to go as far east as Arles, then loop back to Toulouse along the Mediterranean. Ruth booked us an Air B and B for two nights in Forques, just across the river from Arles. We found our room quite comfortable and large.

After finding our room, parking in an almost impossible small space and getting directions, we headed across the Rhone River to Arles. We barely squeaked across a very tiny bridge, vowing to find a different crossing on our way back to Forques.

That night we found a fabulously decorated hotel with a great restaurant and had a fancy dinner with drinks and determined that should we venture back to Arles in the future, we would stay at the L'Arlatan.


Arles had 5 Centuries of Roman occupancy before the Medieval times.  After paying a small fee, we were free to wander through the Roman Theater. 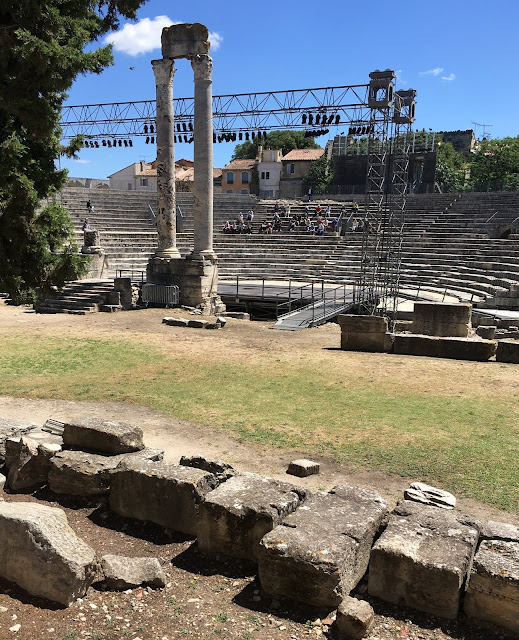 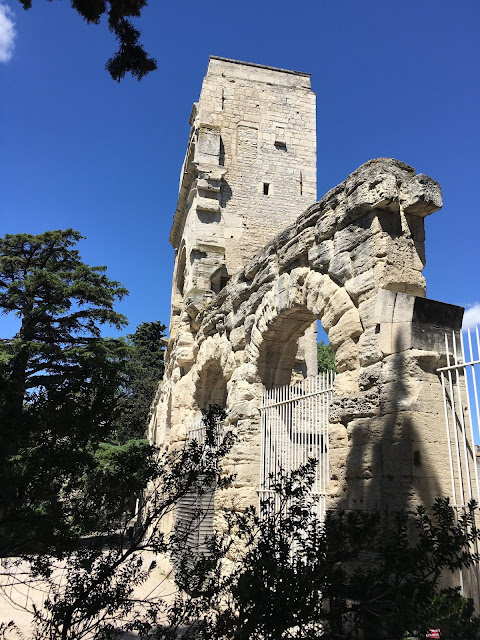 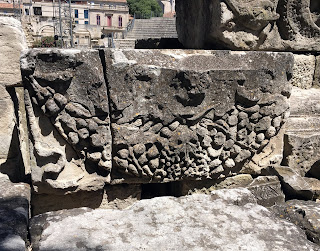 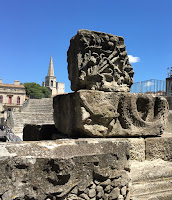 I question that our civilization's leavings will be so beautiful. 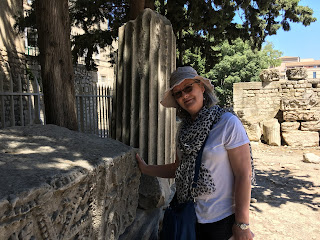 Next we moved on to Arles Arena. 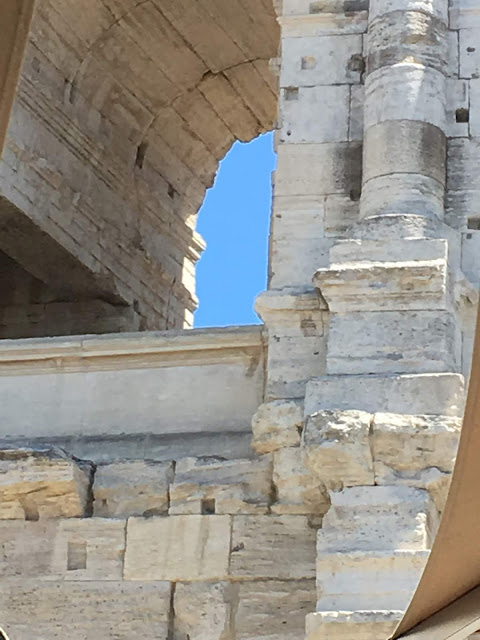 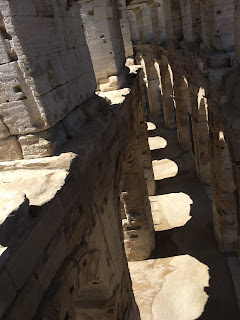 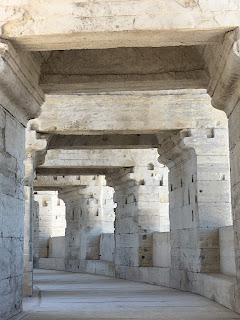 I couldn't help dreaming of creating abstracts with neutral colors, textures and a bit of blue. 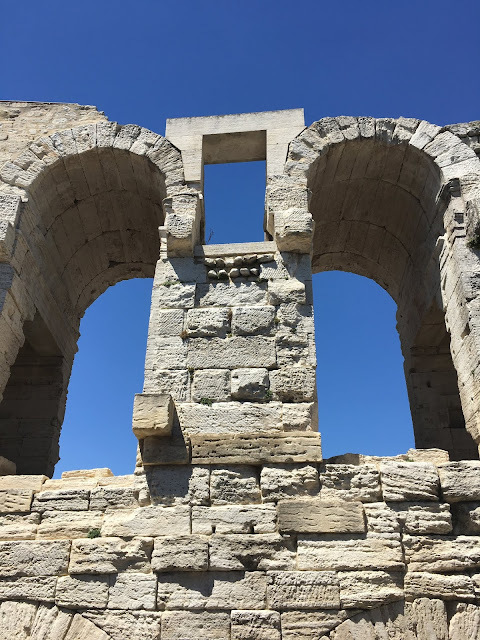 I swear I will pay more attention in my history classes in my next life!

You can't be in Arles without a nod to Van Gogh, who lived there toward the end of his life. Large posters of his work are placed around the city, noting the subjects of his art. We only came across this one, Cafe Terrace at Night. 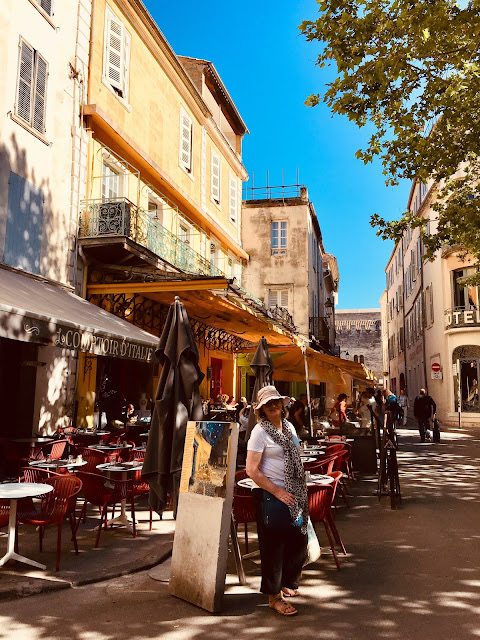 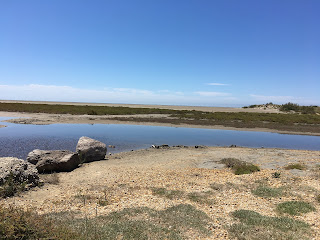 We began our loop back to Toulouse along the Mediterranean Sea. We hoped to see the white horses and flamingos the area is known for.
How better to soak up the scenery without the crowds than on a bike. I was delighted to find out that my new knees could peddle along just fine (with a couple of sandy spills). 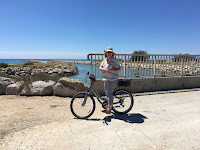 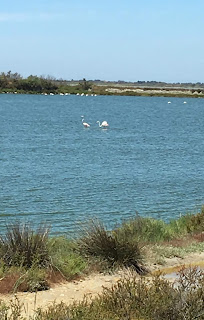 The flamingos were not quite pink, and the white horses all had humans on their backs, but the day was sunny and warm and we were thrilled to be out on this adventure.

Our trip together was winding down. We had just two nights left and had only two more destinations in mind. A night in Béziers put us near the famously restored town of Carcassonne.

This is the very vision I have of a medieval hilltop town.  The protective walls, towers, and walkways are iconic. 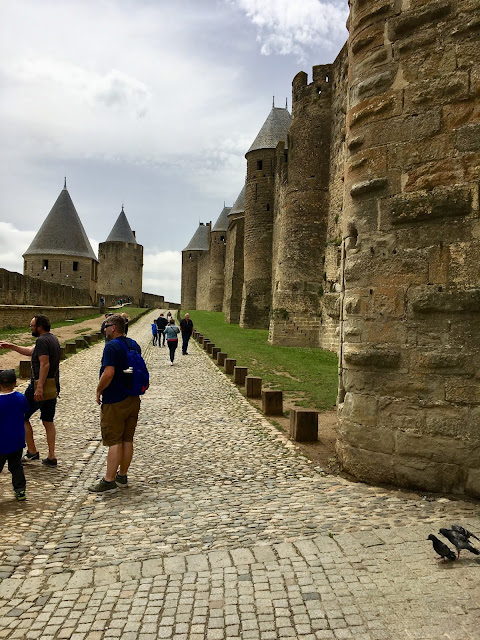 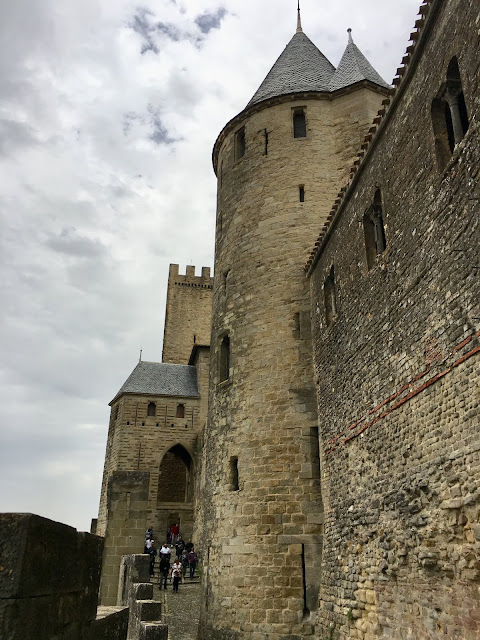 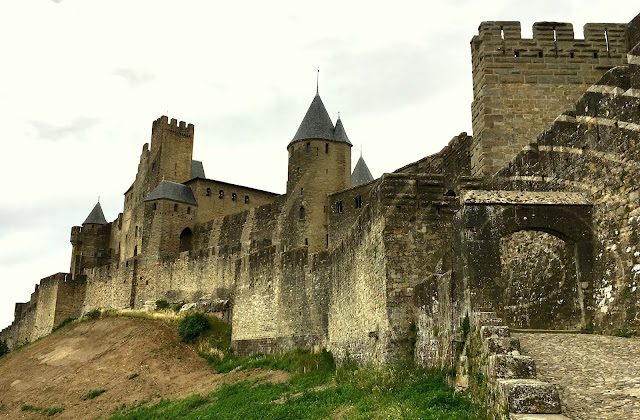 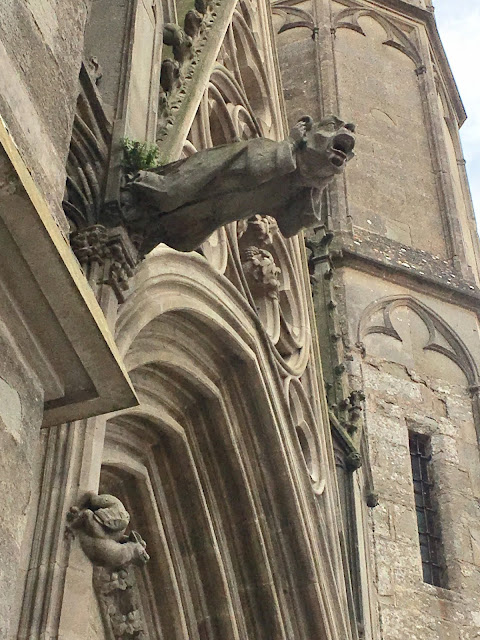 This is the view from our B and B in Limoux. Ruth wanted to see this small town where a friend teaches a summer workshop. 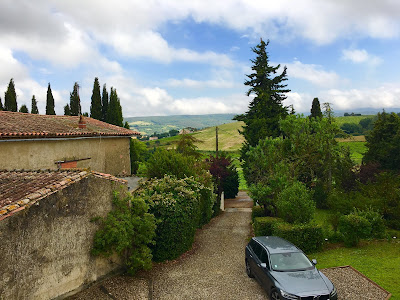 So it was back to Toulouse where Ruth would meet up with her art workshop participants and I would have one last day and night in France on my own. After checking in to my hotel, I wondered the city, enjoying the variety of buildings, people and activities Toulouse offered. 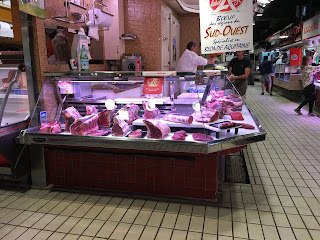 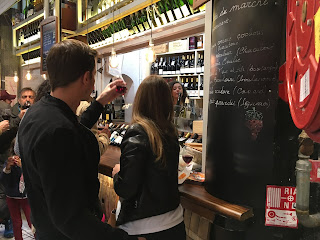 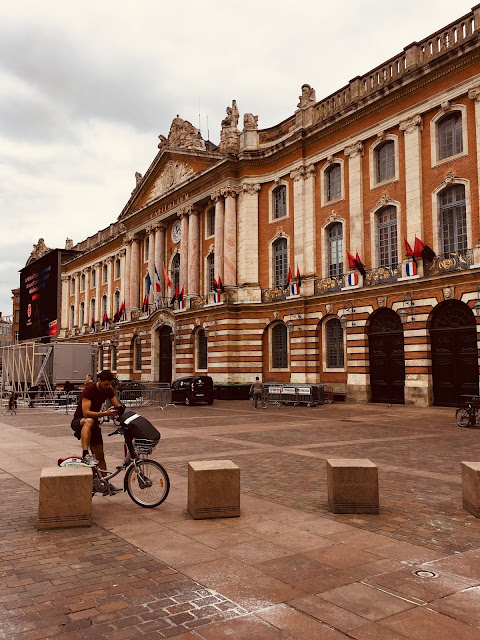 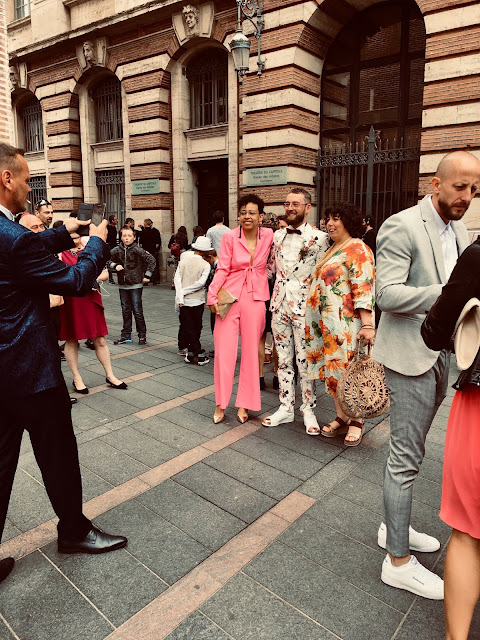 Couvent de Jacobins, known for the palm tree like ceiling 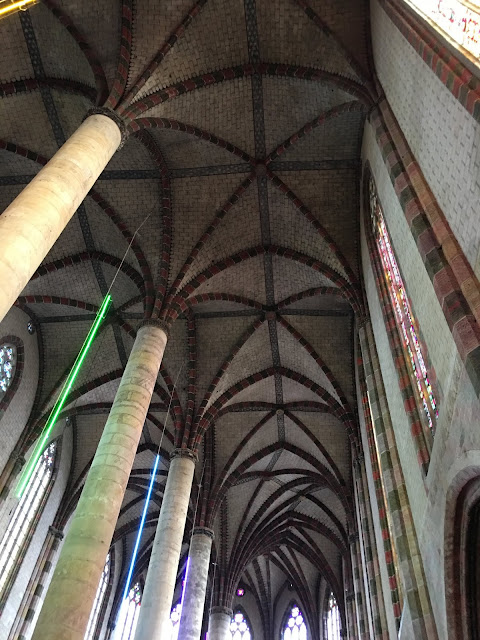 A less than permanent home 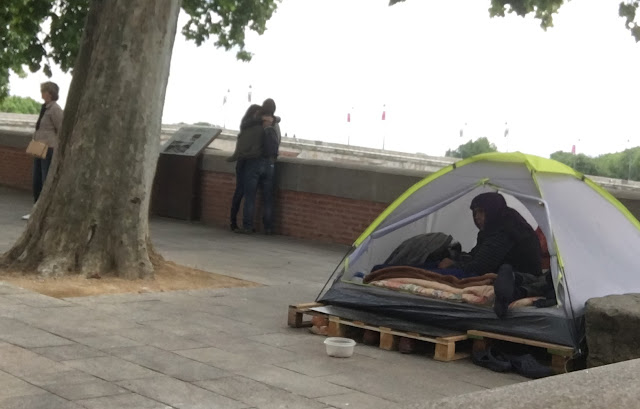 Bridge over the Garonne River 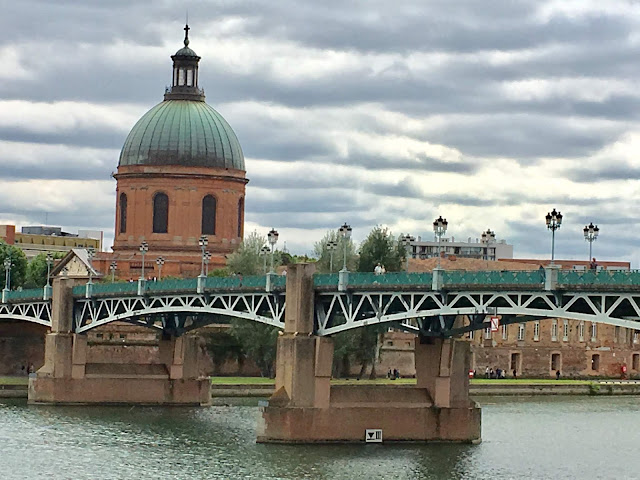 After another delicious French meal, I hit the sack. I had a morning flight and early wake-up call ahead of me.

The following morning, as the sun began to hit the buildings of Toulouse, I caught the bus to the airport. What a marvelous and adventure filled few days I had in Southern France. Thank you, Ruth, for the phone call. 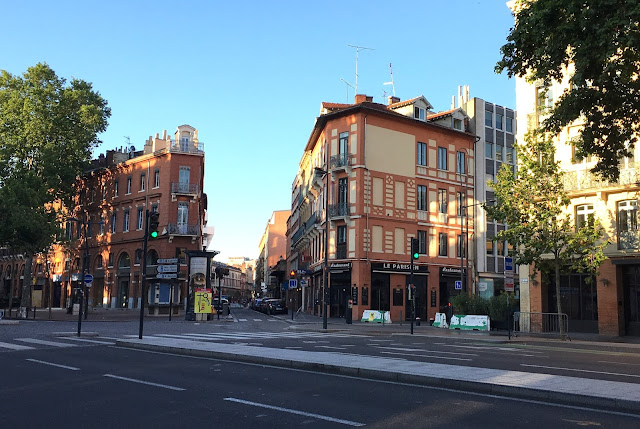