I've spent a lot of time in the studio this week. Mike is rafting/rowing the Grand Canyon, so I've had very few distractions.

One project I've worked on has been creating 3 small paintings for an upcoming show at Vistra Frame Outlet in Eugene. My three paintings are in 6 x 8 frames and will sell for under $200.

Sweetheart Abbey is inspired by a ruin I saw recently in Scotland. This piece is covered with collage, then painted over with acrylic. I've got to say that it is a challenge to use collage on such a small painting. 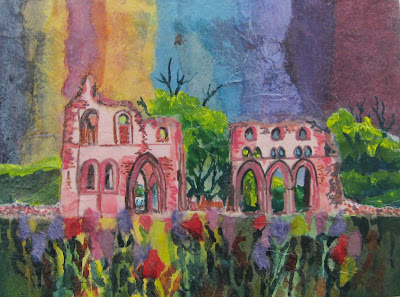 Lavascape #12 is the smallest I've ever done of this series. I began these lavascapes several years ago in Hawaii. This one is acrylic with some collage. 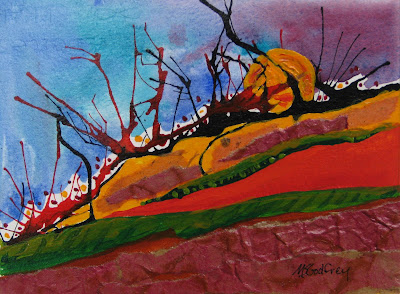 Liz Matissed is a small rendition of a painting I did in the Betsy Dillard Stroud workshop I took in April. The original is on a full sheet of watercolor paper and I was curious how it would translate into a small piece. It seems to suit this size also. 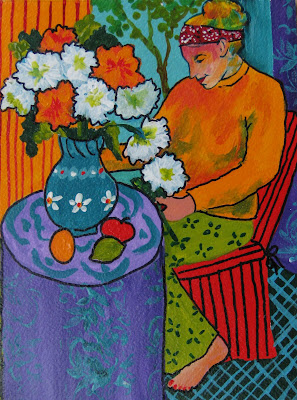 If you are in Eugene, stop by to see this show of small art pieces. Many artists will be represented in this show, and the work will be affordable.
Posted by Margaret Godfrey at 10:16 PM 3 comments:

We missed the Royal Wedding by 2 days, but England was still abuzz with excitement. Our first glimpse of London was from a Double-decker bus, where we could really enjoy the celebratory flags hung across the streets. 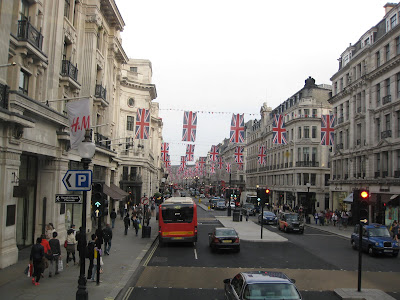 We had our first meal near Piccadilly Circus (Mike in the middle) . . . 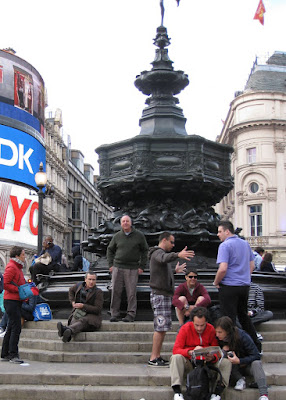 where we enjoyed our first pint of English beer. 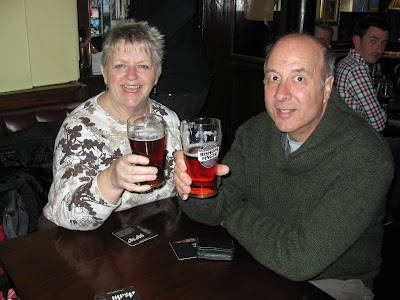 From then on, it was a lot of sightseeing with lots of walking, tube and bus rides, and one boat trip down the Thames River to Greenwich.
Our first day we tried to get into Westminster Abbey. The queue was ridiculously long, and we decided against the wait. And even by the end of our week there, the crowds were daunting, so we never did get in. I guess everyone wanted to see the trees and flowers brought in for the Royal Wedding. 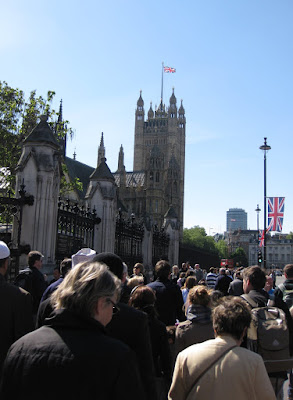 But there is plenty to see from the streets. Across the street from Westminster are the Houses of Parliment. 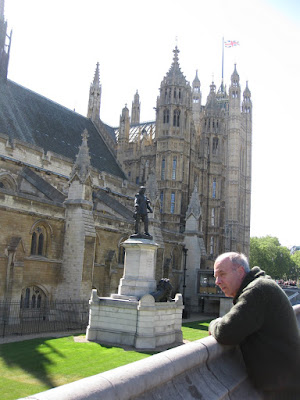 Walking down the street from there, you pass Downing Street. 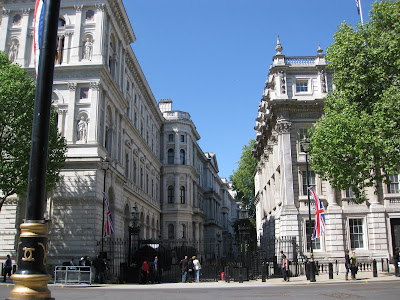 All over London you see what a passion for gardening the residents have. They do so much with pots and small bits of soil. 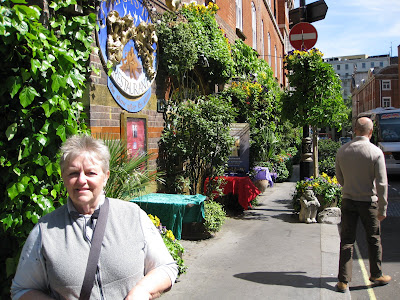 London's situation on the River Thames makes it impossible to avoid the many bridges across the river. Here's a great view of Big Ben and the Houses of Parliament. 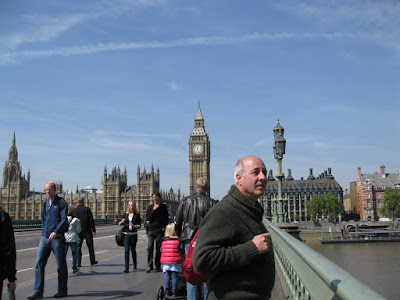 We really enjoyed a boat trip down the Thames to Greenwich. 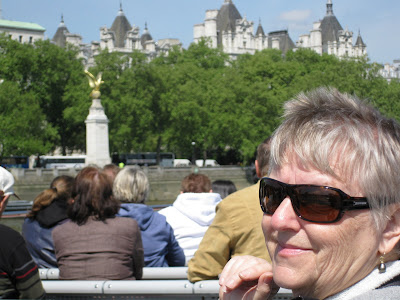 Here's a nice view of the Tower Bridge from the river. 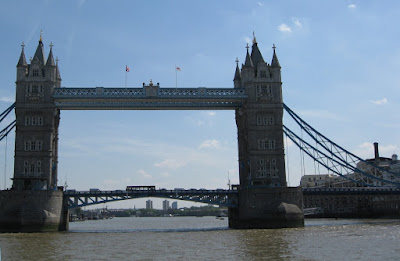 And then a day in the British Museum, just touches the tip of the iceberg, so to speak. One could spend weeks and not see everything there. We only got through Egypt, Assyria, and Greece. 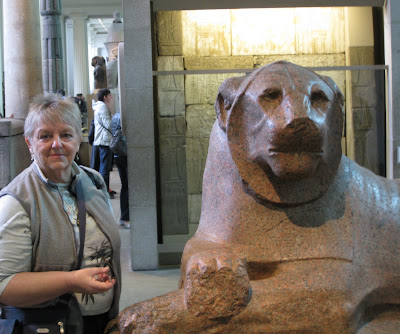 Do these cat statues remind anyone else of the Pink Panther? 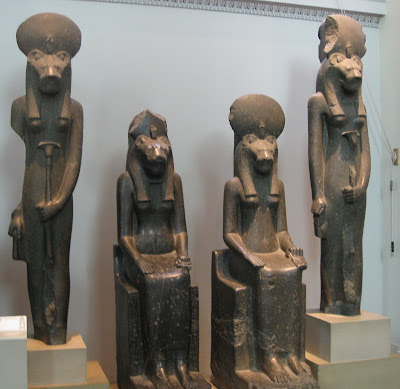 And, of course, the Greek Elgin Marbles are there, too. 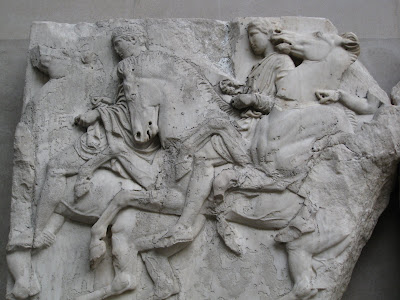 After a long day of sight-seeing, I found a place to put up my feet--Ye Old Cheshire Cheese. This pub was a favorite of Dickens, Tennyson, Samuel Johnson to name a few. This had so many little rooms and nooks and crannies, it was amazing. And, man, did I enjoy a place to stretch out and drink another pint! 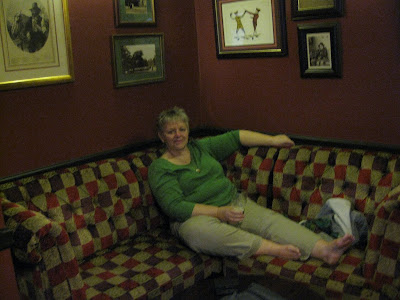 We could easily spend a month or two in London and not see and do everything. We did our best to cram in a lot, while enjoying ourselves, but then on day six, we packed up and headed to the airport. We met up with my sister, Barbara, niece and nephew, Cathy and Dave at Heathrow Airport and flew to Scotland.

St. Andrews, Scotland is where Cathy and Dave's daughter, Emily, is winding up her term abroad. We all found that was a great incentive to visit Scotland.

We rented a people mover, which is what the Scottish call a 6 passenger van. Mike, somehow, became the first driver. I'll tell you, it's not easy being a passenger traveling on the wrong side of the road, so I can only imagine how terrifying it is to be a driver. At first, every time a car came around the corner on the left side of the road, we would all gasp. Luckily, Mike handled the driving quite well. We didn't add any dings to the vehicle, and we didn't kill any bike riders!

Our Scotland crew, left to right:  Mike, me, Dave, Emily, Cathy and Barbara. The ruins of St. Andrew's Cathedral are behind us. 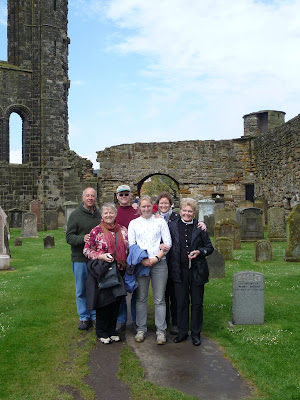 Oh my, Scotland is beautiful and rich with history. First of all the countryside (and there is plenty of it) is stunning. 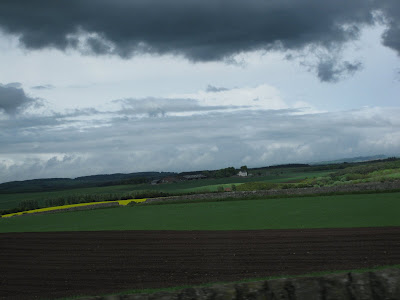 The yellow crop is rapeseed, which is made into canola oil. 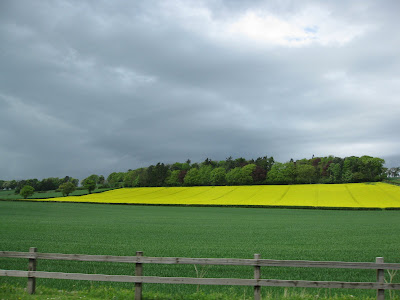 The fields abound with sheep, lambs, cows and calves. The Galloway cow, or belted cow (in the middle of this photo) is an amazing example of breeding for color. 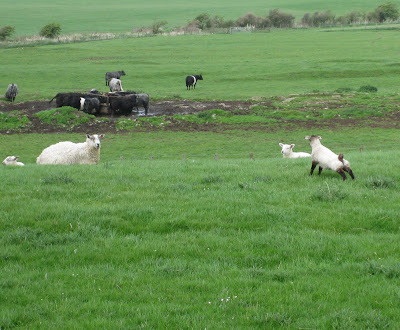 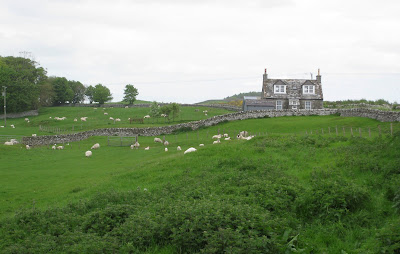 Scotland's history is rich with dramatic, bloody, and romantic stories. The castle and abbey ruins we visited in Southern Scotland were built in around 1100 to 1300. The British raided and took possession for awhile, then another bloody battle would lead to the Scottish taking over again. And so it went for hundreds of years. Here are some of the ruins we visited. 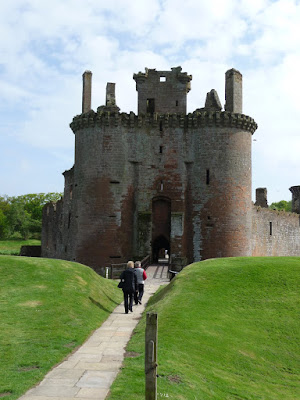 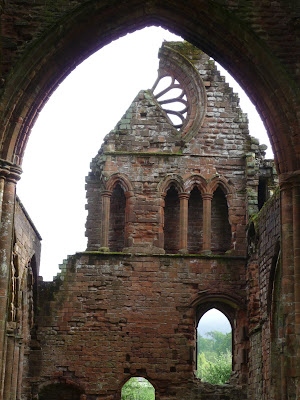 Hermitage Castle, which has a great story involving Mary Queen of Scots. Oh, and it's haunted, too! 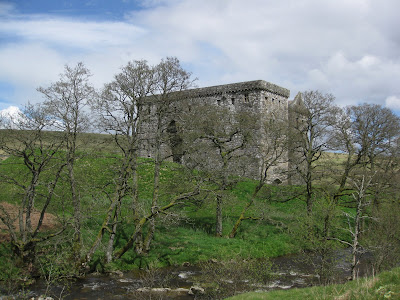 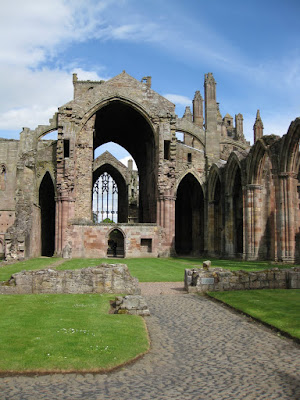 Famous for it's great exterior sculptures. 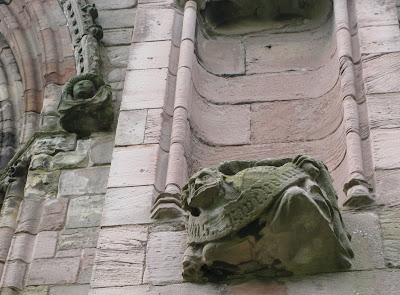 It was a fabulous trip full of fun, a bit of adventure, with a new interest in the history of the British Isles. Maybe we can return someday.

But now I'm home, fighting moles, unpacking, doing laundry and sending Mike off for his first-time-ever rafting trip down the Grand Canyon. I hope to make my way out to the studio once the jet lag is over.

If you've made it this far and aren't sick of photos, here is the link to our picasa web album.