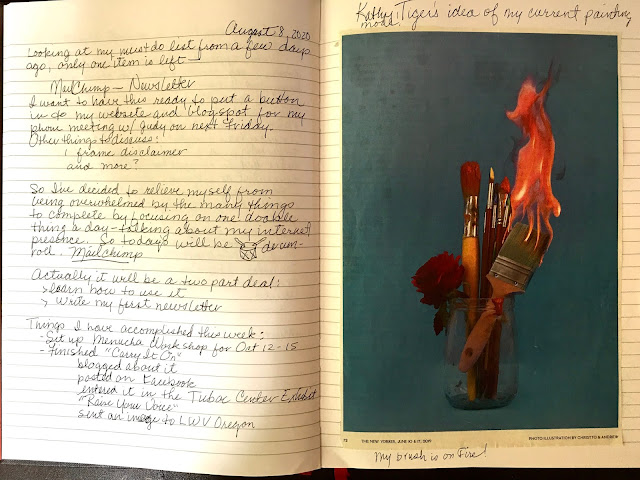 My good friend, Kathy Tiger, recently gave me a photograph of a jar full of artist's tools including a brush in flames. (I liked it so much I pasted into my journal.)  I do feel a bit like my brush is on fire because I have been painting much more, with an internal drive that I haven't felt for quite awhile. After painting so much plein air recently, I moved into the studio to create the painting I've had in my mind since last fall. It might even be the end of my "Teach Me" series.

An axiom of mine has been "What If." This idea in the back of my mind will lead my art to a new level--one less constrained by rules, more original and more gratifying to me. And this leads into . . .

How to express "Teach Me: Rural America"

The statistics of today reveal that girls in rural areas continue to have lower high school graduation rates. They clearly have fewer opportunities, perhaps less encouragement, and reduced exposure to higher education than girls growing up in urban and suburban areas. Read Hillbilly Elegy or Education to get a better idea of the struggles in rural America.

But what would work as a visual theme for this piece? I grabbed a bit of history. Remembering my older sisters talking about wearing "flour sack" pajamas, I began to envision the prints used to entice buyers to purchase their flour based upon the prettiest floral patterns. I liked the idea of companies using art to sell their products.

"Through the depression and later, Flour Sacks featured colorful patterns for women to make clothing. Innovative and desperate, they often emptied the sacks and used the fabric ... Who knew something as simple as flour could be so rich in American history!" https://www.littlethings.com/flour-sack-dresses/

Because I love painting patterns I enjoyed looking at hundreds of these flour sack images on the internet, imagining how I would create my own versions to use in this painting. Painting patterns was in my wheelhouse, painting girls with reaching arms and hands were also artistically comfortable. But how could I convey history in rural America.

Another idea came from talking to a friend who suggested a mountain cabin from the Appalachians. I had included a relevant landscape in many of the pieces in this series, but I didn't want it to be in the present. So "what if" thoughts came to mind. What would happen if I painted the cabin first in white gesso, then painted over that? Since gesso coats the paper protecting it from absorbing all the watercolor, I hoped for a ghostly image.

After placing a blue film over the images of the flour sack and figure, I drew a cabin in the background. I then painted the cabin with trees behind with the white gesso. I have never done this before, so I had no idea if it would work in the way I hoped.

I was really pleased that my "what if" thinking had led to a new technique in my tool box. My next idea was to add a floral pattern into the background. I used a favorite tool of mine, a stamp to create red flowers with green leaves, creating a large pattern for the background. This pattern was inspired by my earlier investigation into the flour sack patterns.

If I didn't have trust in my ideas, this could be almost scary!

It was now time to work on the two saved areas. I pulled up a flour sack image I really liked, particularly because it had a checkered pattern. I felt the painting needed a change of patterns since the girl was going to have another floral print. I used frog tape to create the checks.

Playing with a Different Surface

Most of us water-media artists start with traditional watercolor paper and eventually find one they enjoy because they can trust the results when watercolor paint is applied. For me, I've always loved Arches 140 pound cold pressed, but I know other artists have different favorites. And then there are some surfaces that push the boundaries  of the traditional way to apply paint. Some of these interesting and challenging surfaces can be made at home.
A few years ago on a day when I just didn't have the inclination to paint,  I collaged strips of newspaper on a 300 lb. Arches watercolor paper. I then used gesso (a white paint mixture consisting of a binder mixed with chalk, gypsum, pigment, or any combination of these) to cause the words to fade leaving an interesting and rather unique surface to paint on. It does not take kindly to transparent watercolor, but both gouache and acrylic paints work well on top of the surface.
Having the news implied by this surface, I have used it to talk about more historical or newsworthy subjects. For this one, I had in mind the 100 Anniversary of the 19th Amendment, giving women the right to vote. Two years ago, I painted a similar one with the Suffragists in the background and a woman and child in bright colors in the front.
But my idea for this one was to have a row of women of all ages and colors in front.
It is quite a bit of work to paint these ghostly figures from the past.
And then came the modern women as a front line. It came to mind that this is somewhat like Portland's Wall of Mothers. But creating it reminded me so much of my childhood making original outfits for my paper-dolls.
As my frontline became complete, I realized that they needed to be grounded somehow. I had an inspiration to create shadows, not with paint, but with newsprint collage without the white gesso. (I often get these ideas that are super cool, but add complications to finishing a painting.)
And here is the finished painting: Carry It On.