An New Gadget on the Blog

Following the lead of fellow artist Linda Rothchild Ollis, I've added a place on my blog where you can subscribe to my blog. It allows you to sign up to be notified when I post a new blog. The thing to watch for is that the reply to your email address, which activates the automatic notification, may land in your junk mail. 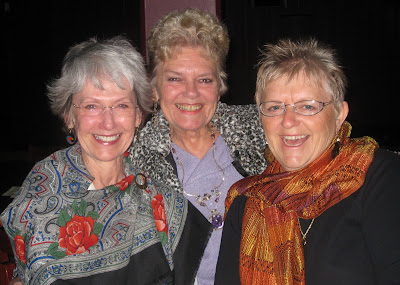 A night out with my sisters--left to right, Janice (the birthday girl), Barbara, and me.
Posted by Margaret Godfrey at 11:23 AM No comments:

Did I Go Too Far?

Inspired by the success of Sound Bites, the painting/collage of the sailors, I started a new piece using the same idea. I took a failed painting with Italian colors to combine painting and collage again. This piece follows Skip Lawrence's advice of a little and a lot. This has a little painting and a lot of collage. The beginning part came easily, but then it got more difficult because there were so many decisions to be made. 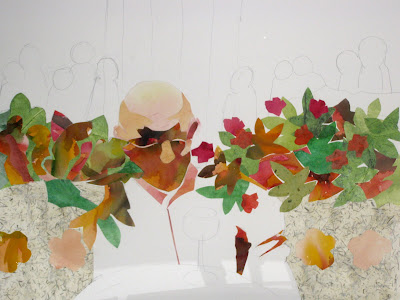 I added dark behind the figures head. 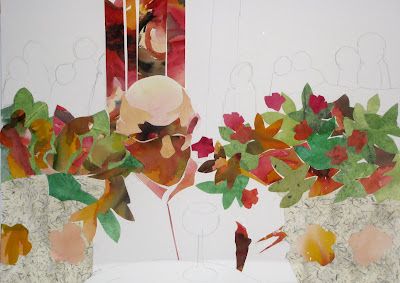 I tried out colors and shapes for the people behind the main figure. 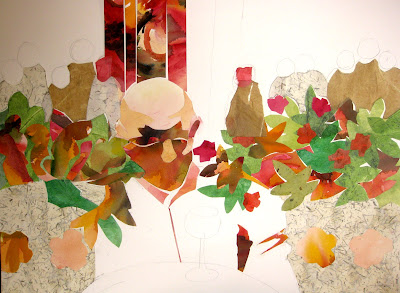 I put on the figures with the head shapes and painted a neutral background. 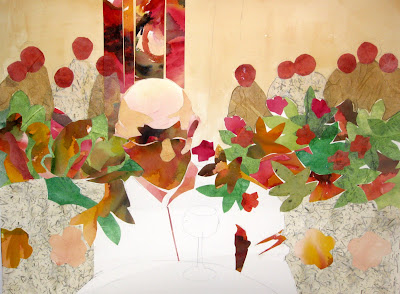 I begin to paint more patterns throughout the piece. 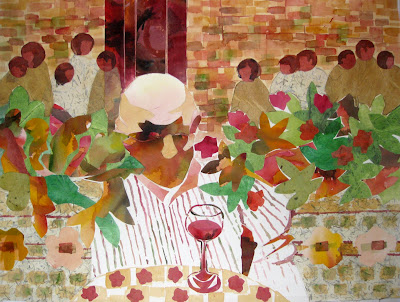 But I see that the piece needs more dark, so I add dark shapes behind the background figures. 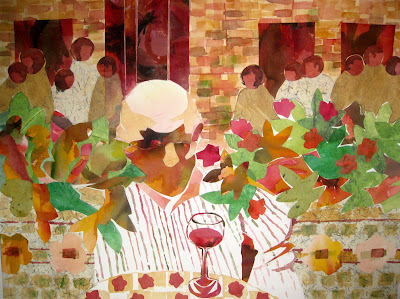 And then I see that I need dark on the two shapes in the bottom corners. 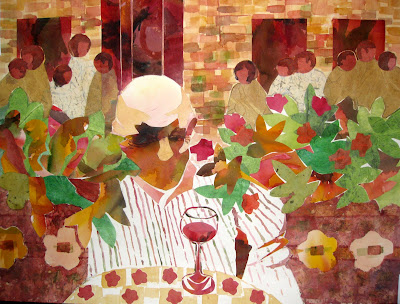 If this image seems familiar, here are previous versions. Sooner or later, I'll get it right. 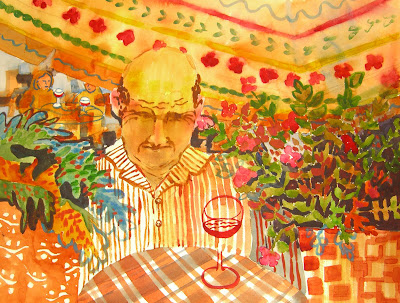 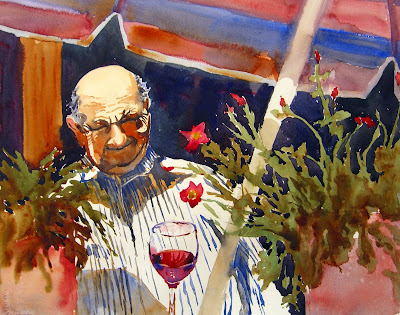 I'd love feedback.
Posted by Margaret Godfrey at 5:22 PM 3 comments:

For quite a few years now my husband Mike and I have enjoyed bringing songbirds into our yard. Mike is especially keen on swallows, so we put nesting houses up for the swallows each year. They need to be high and in an open area to attract the swallows. So this year, Mike planned to put up new utility-size posts in our pasture, string wire between the posts and hang the birdhouses from the wire. 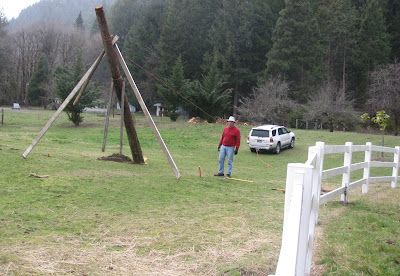 Mike, the engineer can do anything with ropes, pulleys, and a come-along. After cutting down a dead cedar tree on our property, we hauled the two posts made from the trunk to the pasture using the aforementioned items and our John Deere riding mower and trailer. Once in the pasture, Mike erected the pole into the hole with the system illustrated in the photo above. That guy can work wonders. 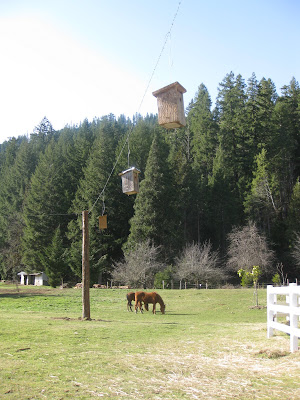 Here you can see the results of the pole raising and wire stringing--the perfect address for swallow houses. And we were just in the nick of time because on March 12, we had our first sighting of swallows circling our property. All winter we've been feeding chickadees and juncos. This past week our feeders have attracted spring birds such as the house finch in the picture below. 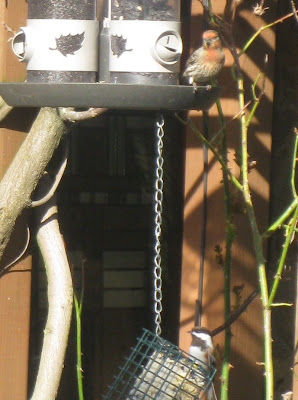 This morning as I awoke to snow again, I'm encouraged with the news of spring delivered by our finches, swallows and red-winged blackbirds.
Posted by Margaret Godfrey at 5:46 PM 1 comment: 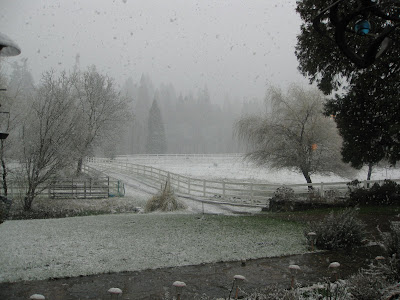 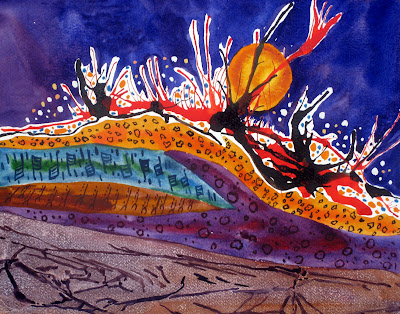 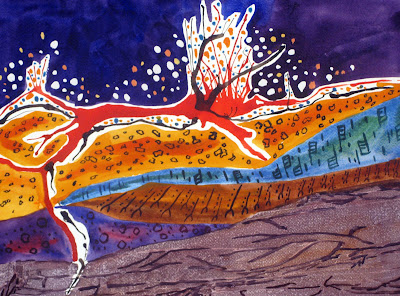 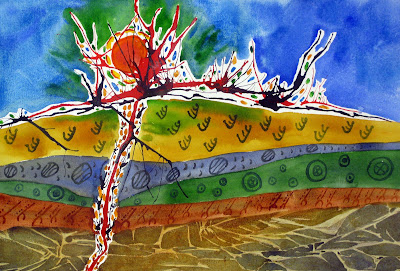 To get a close-up of these paintings, put the mouse over the image and left click.
Posted by Margaret Godfrey at 6:34 PM 2 comments:

Sound Bites Gets a Nod 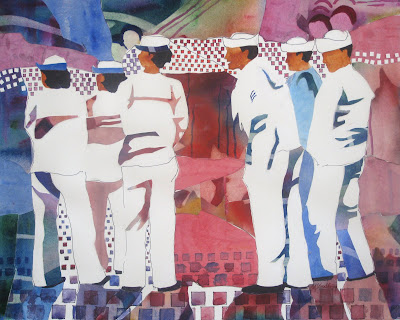 Yesterday I got an envelope in the mail addressed to me in my own handwriting. For any of you who enter art competitions, you know that means you are hearing back with a letter beginning with "Congratulations" or "We are sorry." Usually you can tell before you open it by the bulk of the letter. Acceptance letters will have all the additional information you need to get your piece properly framed, shipped, etc.

So when I picked up the envelope, I could feel it was a thin one. That made the "Congratulations" all that much sweeter. It turns out the Watercolor Society of Oregon is cutting down on the paper and posting all the necessary information on their website instead.

I had already signed up for the workshop with the juror, John Salminen, so I knew I'd be going to the convention in Seaside. But having a piece in the show makes it more fun. Who doesn't like a bit of success?

This painting was chosen one of 80 out of 293 entries. The next possible excitement would be an award of some sort, making it one of the 20 paintings to go into the traveling show. I'll keep you posted.
Posted by Margaret Godfrey at 9:54 AM 6 comments: