A Personal Challenge--Focus on Strengths

In my last post I quoted Alice Walker, "Expect nothing. Live frugally on surprise." As I said in that post, the ups and downs of entering competitions and receiving both acceptances and rejections can keep an artist in a state of self-doubt and insecurity. Rather than letting the voice of a juror determine my perspective of my art journey, I can choose to keep focused on what I know about my own creativity and the art I produce.

Today I am challenging myself to bring to mind the strengths of my artistic efforts. And looking at this painting that was just accepted into the Northwest Watercolor Society's International Exhibition can help me focus on those assets.


I challenge you, whether or not you are an artist, to concentrate on your strengths today. We all need a good dose of exploring our own self-worth.

Insecurity:  this is a consistent theme of many artists' blogs/writings, and if an artist doesn't admit to insecurities--don't believe them! As hard as we fight to paint only for ourselves, listen only to our own opinions, find our own truth, and learn to wear a thick skin; there are so many moments of self-doubt.

This past year I had a string of acceptances in some bigger, national shows, which really set me up to have greater expectations as I sent off my competition entries. Naturally, this made getting the "sorry" letters and emails a bigger let-down than usual. And as things go, after my upswing, came a downswing. I got more rejection letters than acceptances.

If I could reign in my expectations to the things I have control over, like what goes on at the end of my paintbrush and what I put on my sheet of paper, I'd have more energy for the creating.

Shake Off the Winter Doldrums With My Workshop

I have an upcoming workshop at Emerald Art Center in Springfield, OR. On March 1 through 4, 2014, from 9 am to 4 pm class participants will be creating--creating textures on paper to paint on, creating compositions that incorporate reality with the abstract. We will paint rice paper for collage work as well as mine old paintings to find little gems to enliven a new painting. I also intend to introduce folks to making stamps and using them to enhance the interests in a piece of art.

Below is an example of using many techniques to turn the left image into a finished piece with collage, stamping and calligraphic marks. 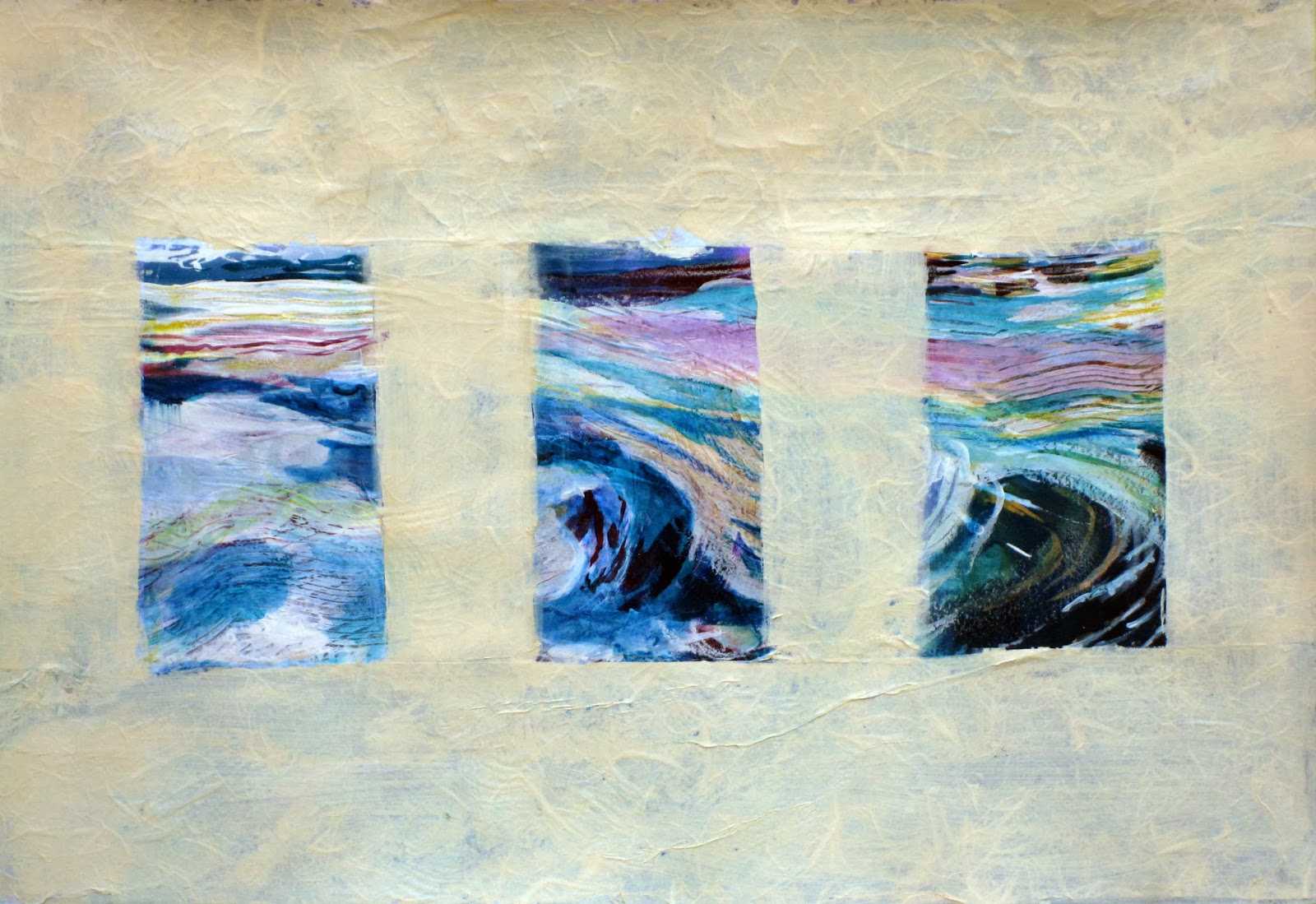 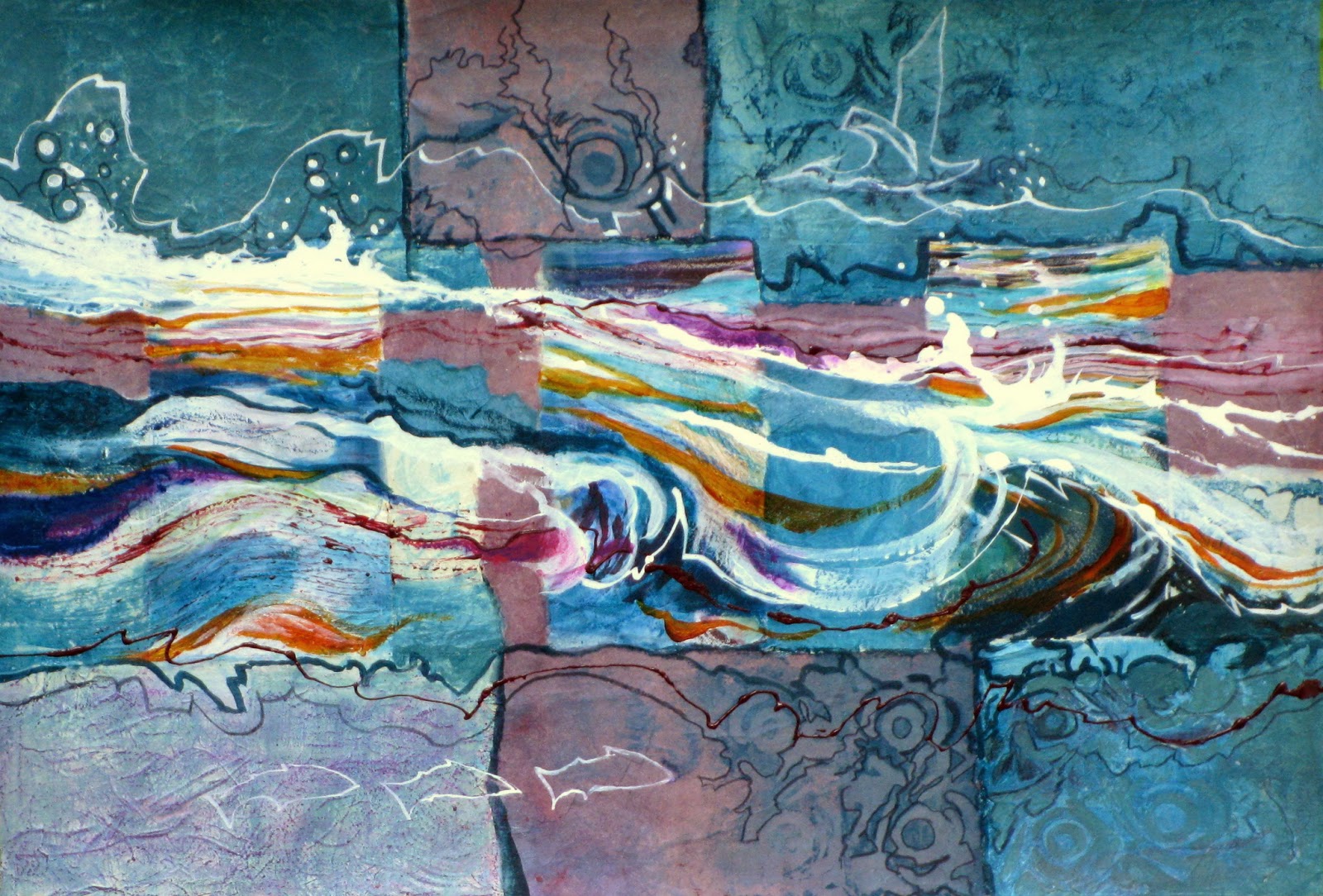 I will also help class participants combine  reality with abstract design, one of my favorite ways to present animals. 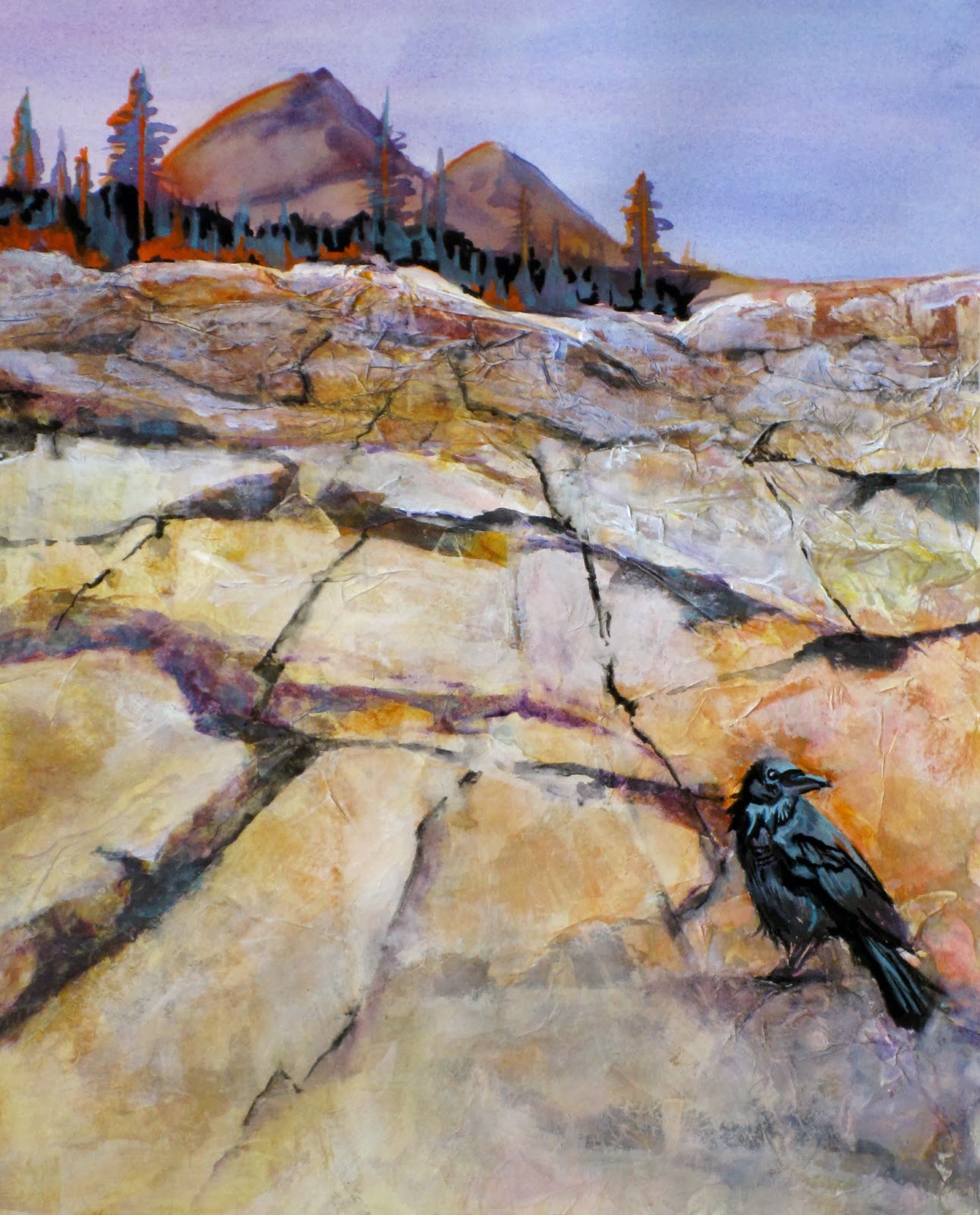 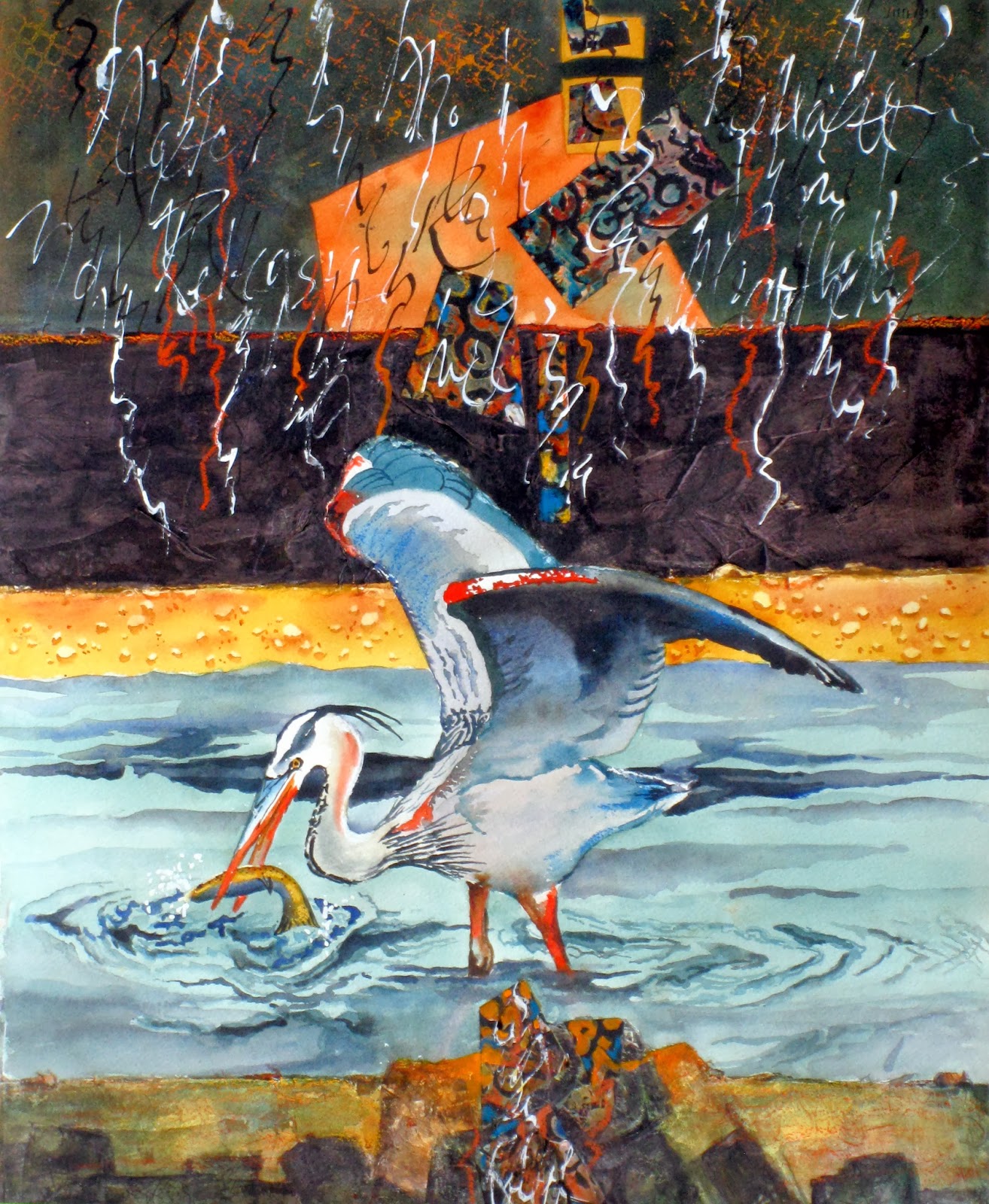 Here are some of the kind words class participants have said about my workshops.
"Margaret’s relaxed, easy manner creates a comfortable environment for the beginner or advanced student.  Her instruction includes many different ways to work with watercolors which has opened up a new world for me."


"Margaret encourages her students to stretch their imagination and skills beyond the ‘comfort zone.’ There is no such word as failure in her classes, only opportunities to experiment and try, try again and find a measure of success. With her help I came to appreciate my own style."


"The best mantra Margaret uses is, “It’s only paper!” Her fearless approach allowed me to be creative and try larger and looser paintings.  After taking classes with Margaret, I was encouraged to apply for membership in the Watercolor Society of Oregon, which I did and was accepted in September, 2007.  I have gone on to sell paintings and exhibit in shows."


"I love Margaret’s demos and the way she encourages ‘loosening up.’  I appreciate the way we stop along the way and evaluate our work.  Her critiques are so valuable.  She can find something good in every painting."

Posted by Margaret Godfrey at 7:50 AM No comments: 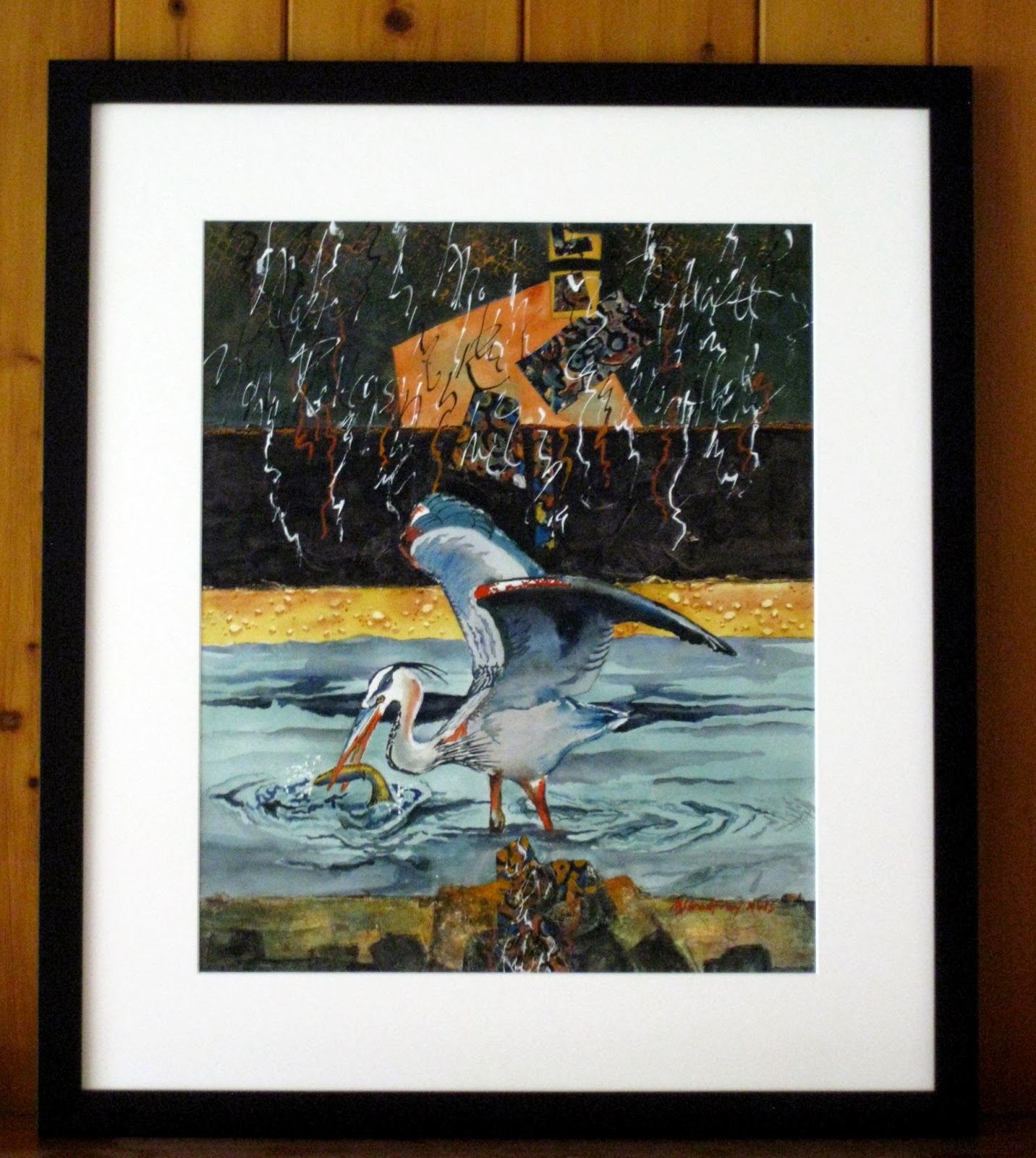 I just spent time choosing the framing materials for my painting Catch, No Release which is going to the permanent art collection of Umpqua Community College. Keeping in mind that this is a museum piece, I wanted to mat and frame it with a traditional watercolor look.

First thing to be decided was which mat to use. Of course I wanted a white, but if you've never looked at the array of whites and off whites, you'd be amazed at the many options. Mostly I think of them as cool white or warm white, and then try to choose one that presents the painting best. The mat color I chose is a creamy white called "White Wash."

Next I looked at the simple black wood frames and settled on one that is contemporary, measuring 1 1/2 inches.

Finally, for the first time ever, I bought museum glass which greatly reduces reflected light. This is a wonderful product that I think may be worth buying for future paintings as it was not as expensive as I thought.

So what do you think of the presentation? Have any of you purchased museum glass?

If you are interested, here is the list of accepted artists for this UCC Art Purchase Project. I enjoyed googling these fellow artist to see their work. It is an honor to be included with them.