Back to the River

I feel I am in a transition period in my artwork. I've focused mainly on my River Series for the past several years, but now I am searching for other ways to express myself through art. It isn't easy.

As I've worked with figurative paintings and experimented with different media, I'm often frustrated, stressed and struggling in the studio. It's a good thing to stretch, expand, and experiment; but as I said before, it isn't easy. So while I'm struggling to refine another direction, why not pull something familiar out of the drawer?

I found Catch, No Release II unfinished in my "starts" drawer a week or so ago and pulled it out. I was drawn to the comfort of its familiarity. The background was perhaps half done, and the lovely water and heron called to me with a soft voice, "You can paint us. You know how." And so I have completed this piece while working on a couple of new ideas. As much as it is good to stretch, it is also good to have control of a painting, knowing where it's going.

This piece may look familiar to my viewers. An earlier version was purchased by Umpqua Community College.


Posted by Margaret Godfrey at 3:43 PM No comments:

A Painting Driven By an Idea

More and more I find my art ideas settling into my mind and refusing to leave until they become a reality. So it is with "Ma'at" (working title). Since the summer I have been thinking more about figurative work and this idea has been there since July. It began as a phoenix, symbolic of rising from ashes. The vision I held in my head  combined Klimpt, with Egypt, with stem cell transplant recovery, along with beautiful heron wings. Since I paint with lots of symbolism, I had plenty of material for envisioning this painting. The more I read about the Egyptian goddess Ma'at, symbolizing justice and truth, I felt comfortable following the symbols given to her in Egyptian mythology. 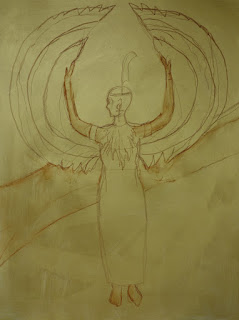 Of course, months after the idea was born, when I began to put something on paper, it was not as easy as you might think. I decided to put it on a full sheet of watercolor paper (30" x 22") that I had previously covered with metallic gold gesso. I sketched out a basic plan using watercolor crayons. As you will see, my sketch started in one way, and the painting developed in another.

I've painted many heron wings, but this is the first time I've attached them to a human body. Thanks to the internet, I had some inspirational wings to work with. 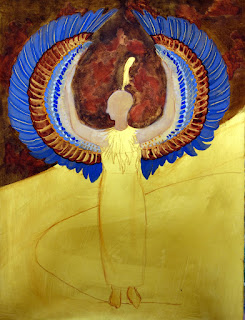 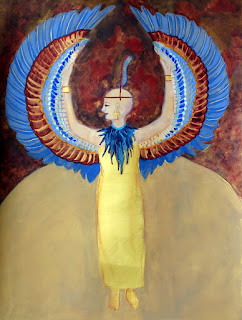 At this point, seeing the diagonal coming in behind my subject seemed wrong. I also struggled with the dark background. As the force of Egyptian art took over, I decided that a perpendicular line to form my kimono shape really worked much better. But I had to try to use repeating curvilinear lines, only to find that didn't work for me either.

As I let go of worrying about design elements, I just began to enjoy the process of creating this figure and the space around her. The curved lines of the background had to go, as did the first try at a face. The great thing about putting gouache paints (non-transparent watercolors) on this surface, that it is easily removed with a sponge or q-tip. 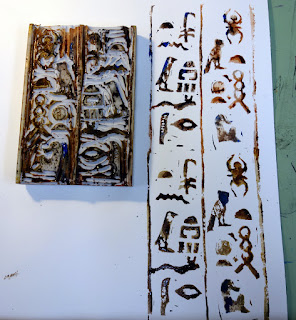 I had been hankering to use some hieroglyphics in this piece, so I needed to take half a day to carve some symbols on a block of Moo Carve. Of course I do not expect this to have any meaning other than supporting the Egyptian theme. I did, however, learn how to use mirror image on my printing so that the symbols would have the correct orientation when I carved them.

So after allowing myself full reign of pattern making on the dress, and a little repetition of that in the background, I see a painting of ideas. I see beautiful wings, Egypt, Klimpt's art, and a strong woman. What do you see? 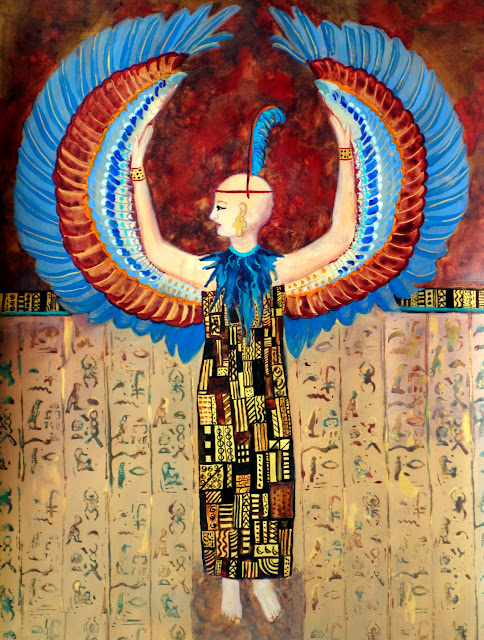 Posted by Margaret Godfrey at 8:18 AM 5 comments: