The winter weather was horrid which forced the rescheduling of my Portland workshop!

The good news there is plenty of time to sign up!

If you have been to many art shows, you have probably seen a number of subjects painted over and over. Roses. Sunflowers. Trees. Children. What can an artist do to make their flower, person, landscape or abstract stand out from the others? What is YOUR message and how do you make your art unique? I want to help you find that element for your art.

So what will we do in the workshop (besides having fun, of course)? First, I will share my own method of digging into subject matter by gathering resources. Not only does it push back Alzheimers, but I find different ways to tell a story. My goal is to help participants do the same. My hope is that each artist finds ways to explore ideas, discover symbols, create a unique language to put more content into their art.

In preparation of this workshop I challenged myself  by choosing a common critter to paint. The Hummingbird. I wanted to create several small paintings telling more of this bird's story. It is the challenge of "what can I say that will make my painting unique?" How can I tell more about this fascinating little creature that we are all so familiar with? I began by looking into what I didn't know about this bird.

An Anna's hummingbird egg is .5 to .6 inches long. Also the bird lays just 2 eggs. So I started with a stamp to scale. I started to put together one/half inch oval with part of an oval to create a border stamp. Stamps are a great way to personalize your art--something I will share at the workshop. 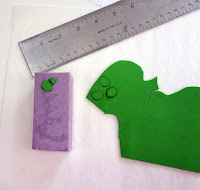 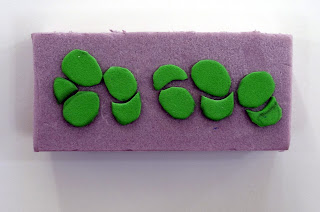 I thought of their small size and ways to paint in a way to convey the scale of the tiny bird to humans. My mind went to the summer when my husband and I sit in our yard late in the afternoon--we are often startled by the buzzing so near our ears as a hummingbird flies in for a drink at the feeder. Sometimes you can feel the wind created by their small busy wings. I used my husband's ear and painted it in proportion to the bird's size. Can you almost hear and feel this little guy? 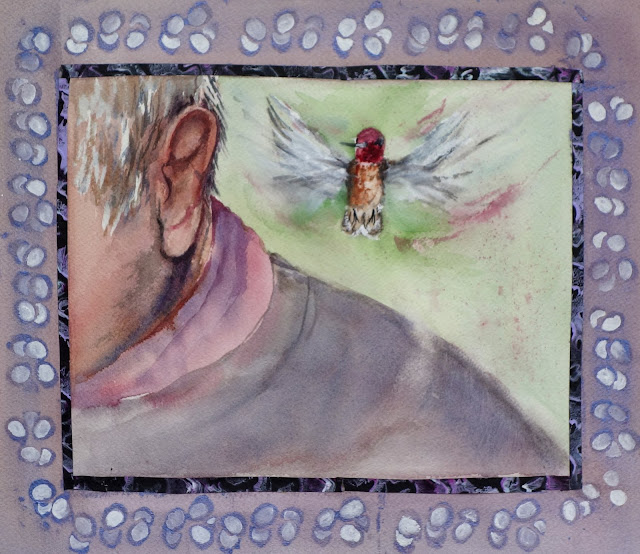 Another great way to get inspired to paint is through words. I found this haiku poem that presented a vision of two creatures being almost paralyzed with surprise in a close encounter. 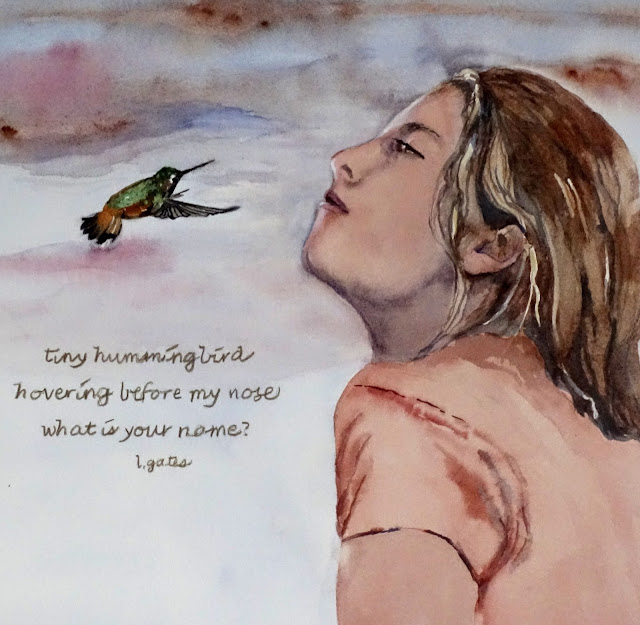 And more hummingbird paintings and ideas are coming. Come join us in May when the weather is milder!

Posted by Margaret Godfrey at 5:05 PM No comments:

After the hustle and bustle of the holidays, Mike and I often travel in January to celebrate our anniversary. This year we planned a trip to Washington D.C., a city I'd never seen, and Mike last visited as an eight-year-old. So on January 1, we boarded a plane in Eugene, Oregon and flew to Seattle to catch our wonderfully planned non-stop flight to D.C. Unfortunately, a snow and ice storm hit Seattle and we were stuck for hours with loads of other frustrated travelers. No flights were heading east, so we eventually got rerouted to San Francisco. Here is a photo of our ice-covered airplane wing as it was getting de-iced (12 hours after we left home). 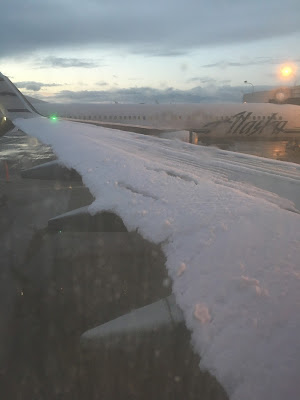 We were finally off. Oh wait, there was yet another glitch in San Francisco. We had been rescheduled to fly out the following night! Were we to spend our 47th Anniversary in an airport sleeping on the floor? With enough whining and asserting our needs, we were finally on a red-eye to Dulles Airport. So a few hours later, with a bit of sleep here and there we were finally standing at the baggage claim area of the Dulles Airport.

You probably already guessed it--no luggage! (A day and a half later it was delivered to our airandb.)

But we were excited to finally have arrived in our grand and beautiful country's capitol. 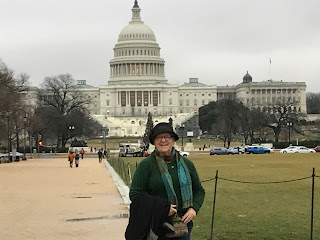 Prior to our trip we contacted our Congressman Peter De Fazio's office, to arrange tours of some of the great buildings on the Washington Mall. Unfortunately we did not get tickets to the White House. The next best thing was getting a photograph at the White House Visitor Center. 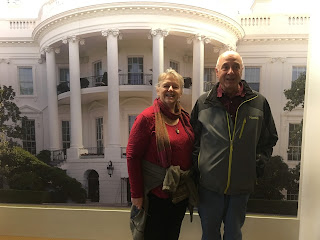 One week is clearly not enough time to see everything on the Washington Mall, let alone any other part of the city, but we made the best of our time. Our first must see was the National Gallery of Art. 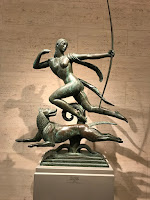 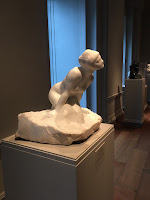 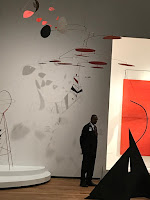 
and, of course, I little Klimpt! 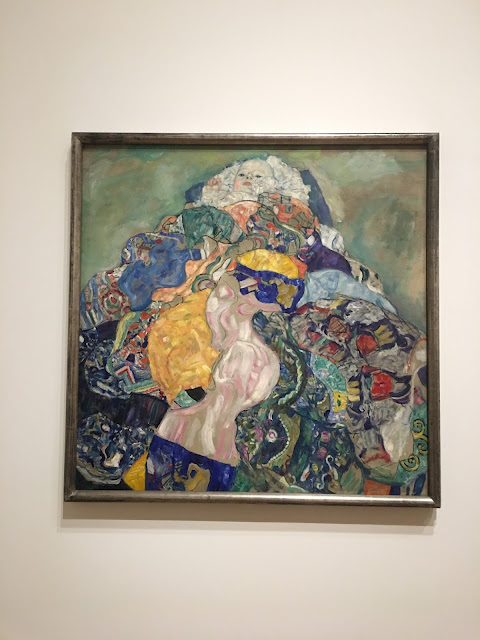 Every day was a new experience from the Smithsonian Museums to the Capitol and Library of Congress. 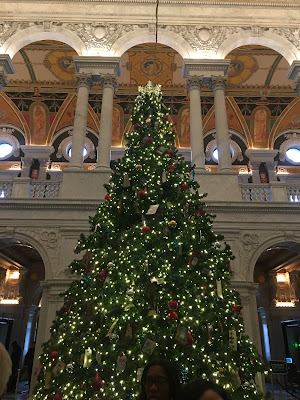 On one of the coldest days -- bleak, with spitting snow, we visited the Lincoln Memorial and the Vietnam Veterans Memorial. The mood of the day was enhanced by the weather. Mike was able to find his cousin's name on the Wall with the help of a knowledgeable Park Ranger. So many men of our age-group are listed on that memorial. 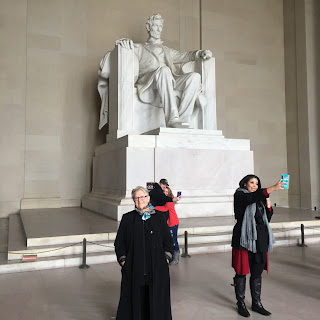 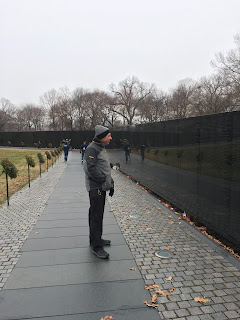 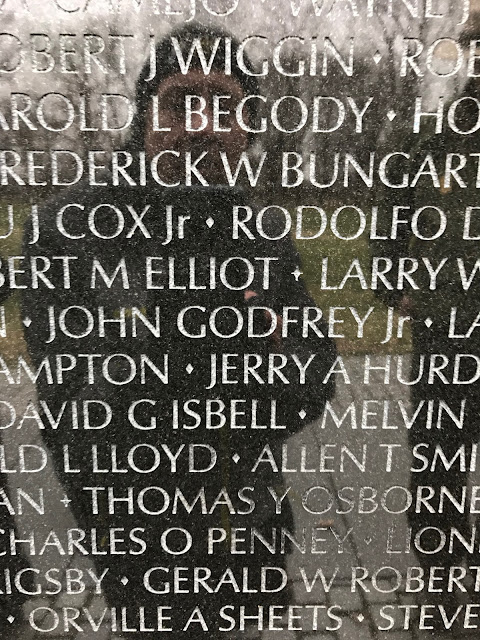 It is a challenge to get tickets to the new African American Museum, but we finally scored 2 tickets by Mike getting online at the crack of dawn and landing a ticket in the website's opening first 10 seconds. If you wait one minute, the tickets are gone. This museum is truly amazing and moving. We went in thinking we knew quite a bit of the history of slavery, but came out overwhelmed by the experience of walking through the museum. 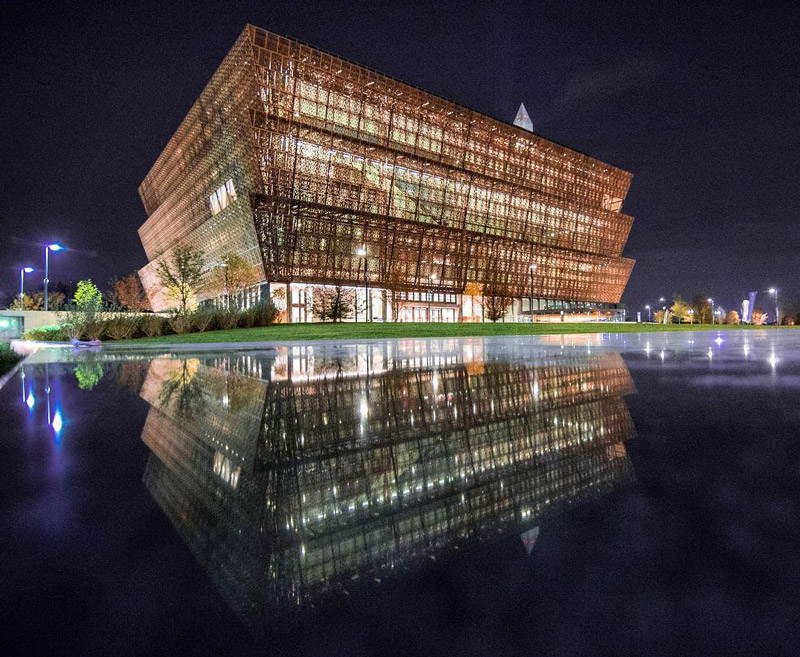 The take away of this trip for me was a feeling of encouragement about the strength of our Federal Governmental System. Our Founding Fathers wove together a government with three branches of power, ensuring that there are healthy checks and balances.  No one branch can break the country. We have survived a heck of a lot!
Posted by Margaret Godfrey at 2:25 PM 2 comments: