A Morning of Making Snakes 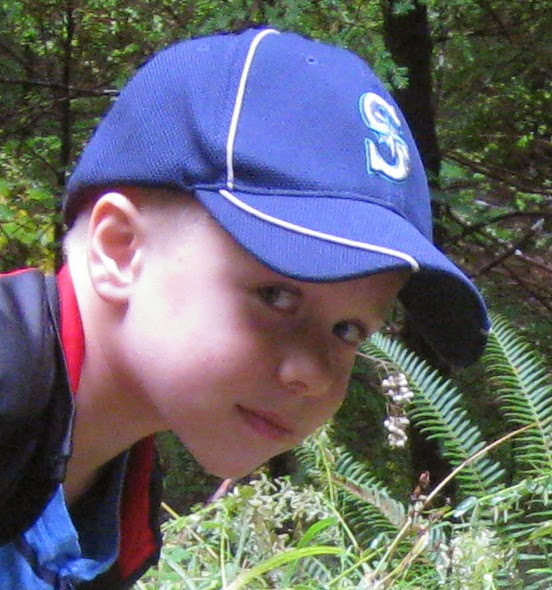 Could you say no to this little guy?

Last spring, when Mike and I were traveling back and forth between home and Seattle, trading off grandparent duties, I did a lot of crafts with Hannah (4) and Noah (6). We saved toilet paper rolls to make animals. We cut up and colored shapes out of milk jugs. We made spring blossoms out of popcorn. Pretty much anything that could be done by both a 4 and 6-year-old was on my radar.

However, late May brought wonderful weather. Rachel (Mom) came home, big sister, Marin, and Josh (Dad) all gathered next door to us in Blue River. The days of crafting went by the wayside.

I did make a promise to Noah, way back when, that we would make a stuffed animal , and as you probably know, kids never forget anything.

After assessing my age group, 4 to 10 years, I thought snakes would be pretty easy. I needed to get some fabric and stuffing in town and quickly eliminated the idea of buying a stuffed animal pattern at the price of $17. I found a really easy idea on the internet: http://www.makeit-loveit.com/2013/08/stuffed-toy-snakes-soft-and-cuddly.html. I'm pretty sure I could have done this on my own, but it was really easy to just follow someone else's idea.

We used some wide craft pattern to make our pattern. Marin was old enough to cut out her own snake pieces. 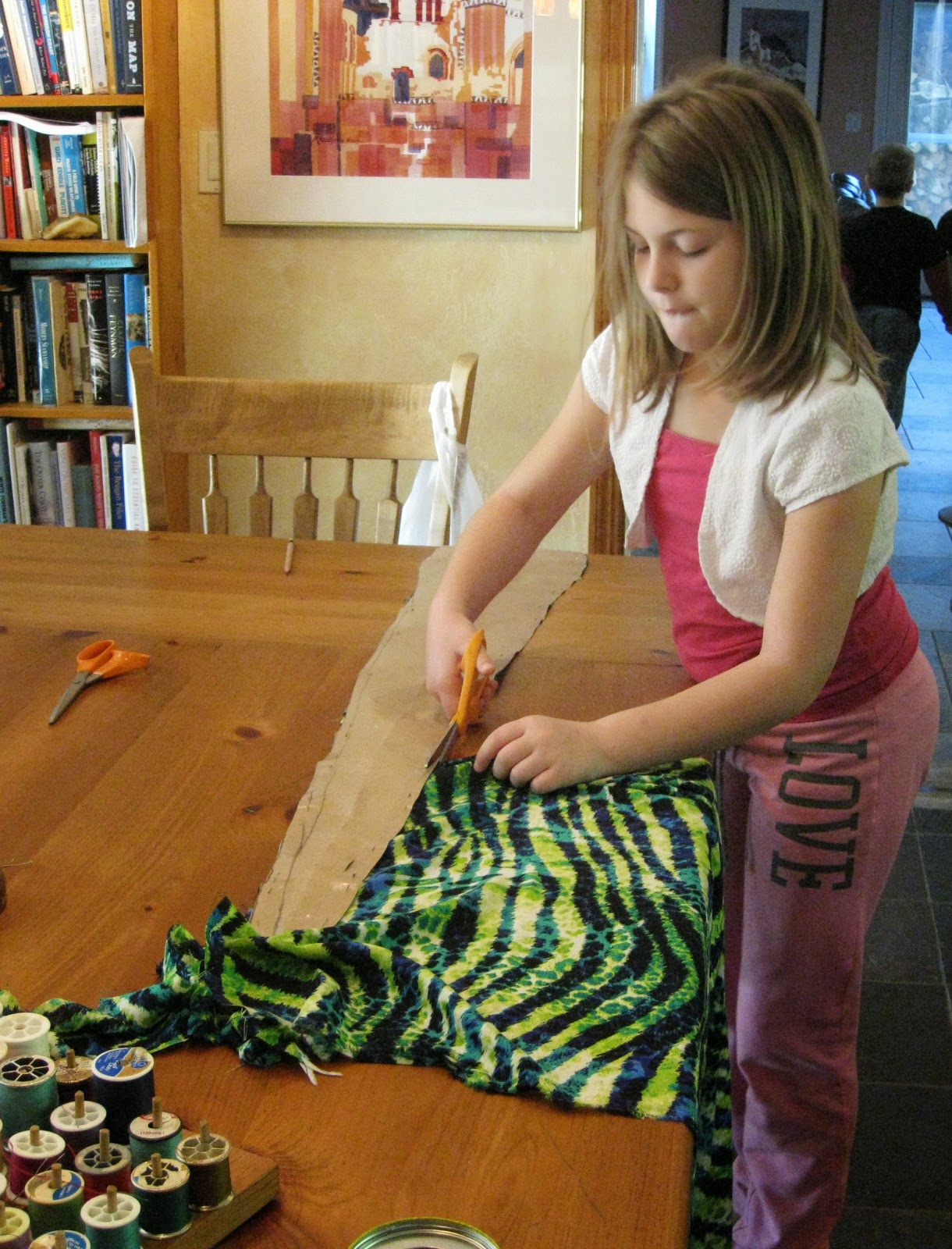 Both Noah and Marin got a little bit of sewing machine experience. The stuffing of the snakes was perfect for all the ages. Marin continued to learn more about sewing making scarves out of the scraps.

Of course, everyone can play with a snake--at least these stuffed ones!

My guilt has been assuaged, since I eventually followed through with my promise. Believe it or not, all three snakes were done in 3 hours and the cost was under $20.

This was a great way to spend a Saturday and I love that it created wonderful memories. Marin said it was one of her favorite days ever!

We only have 2 1/2 weeks until Rachel and her clan move to Arizona! 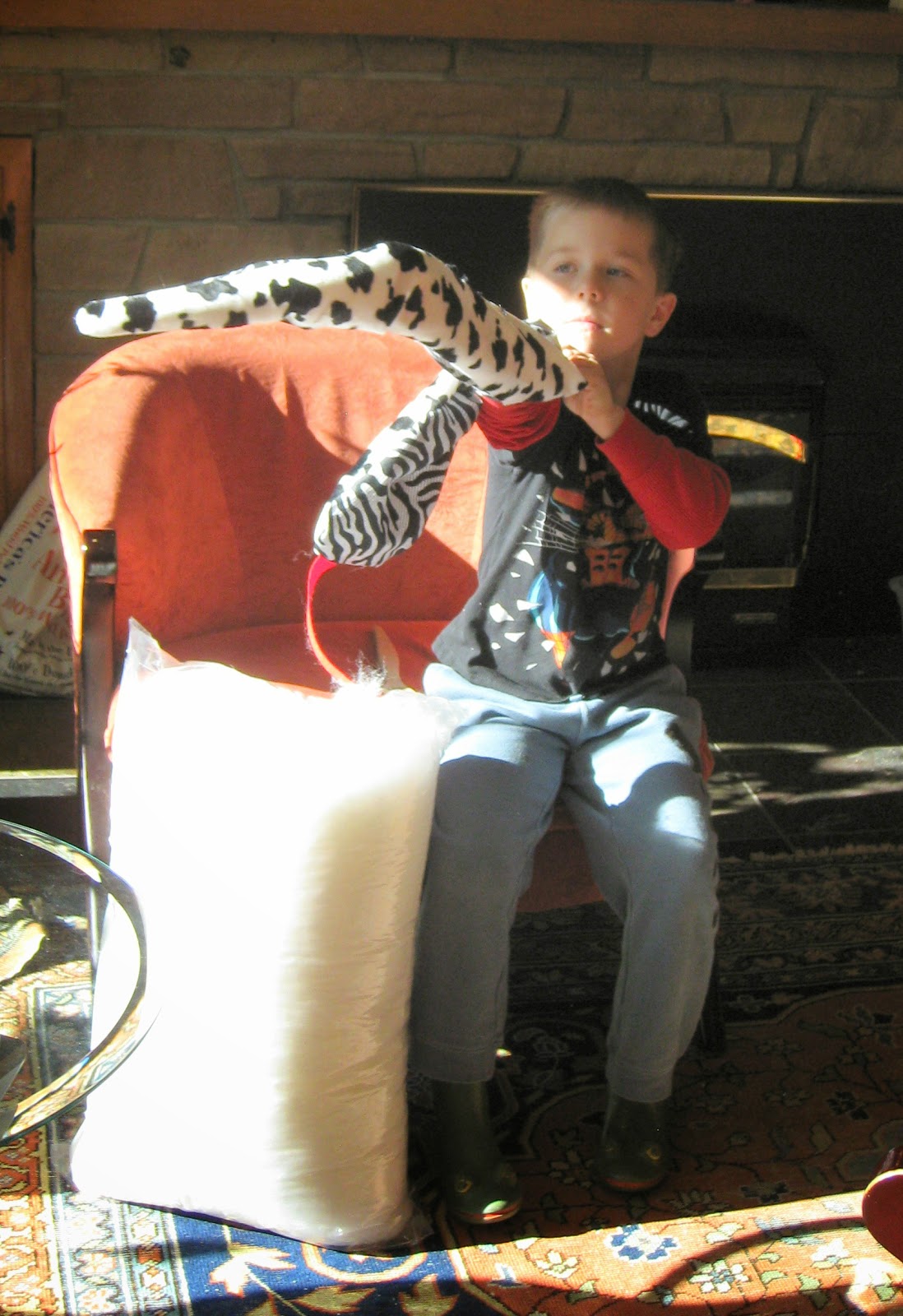 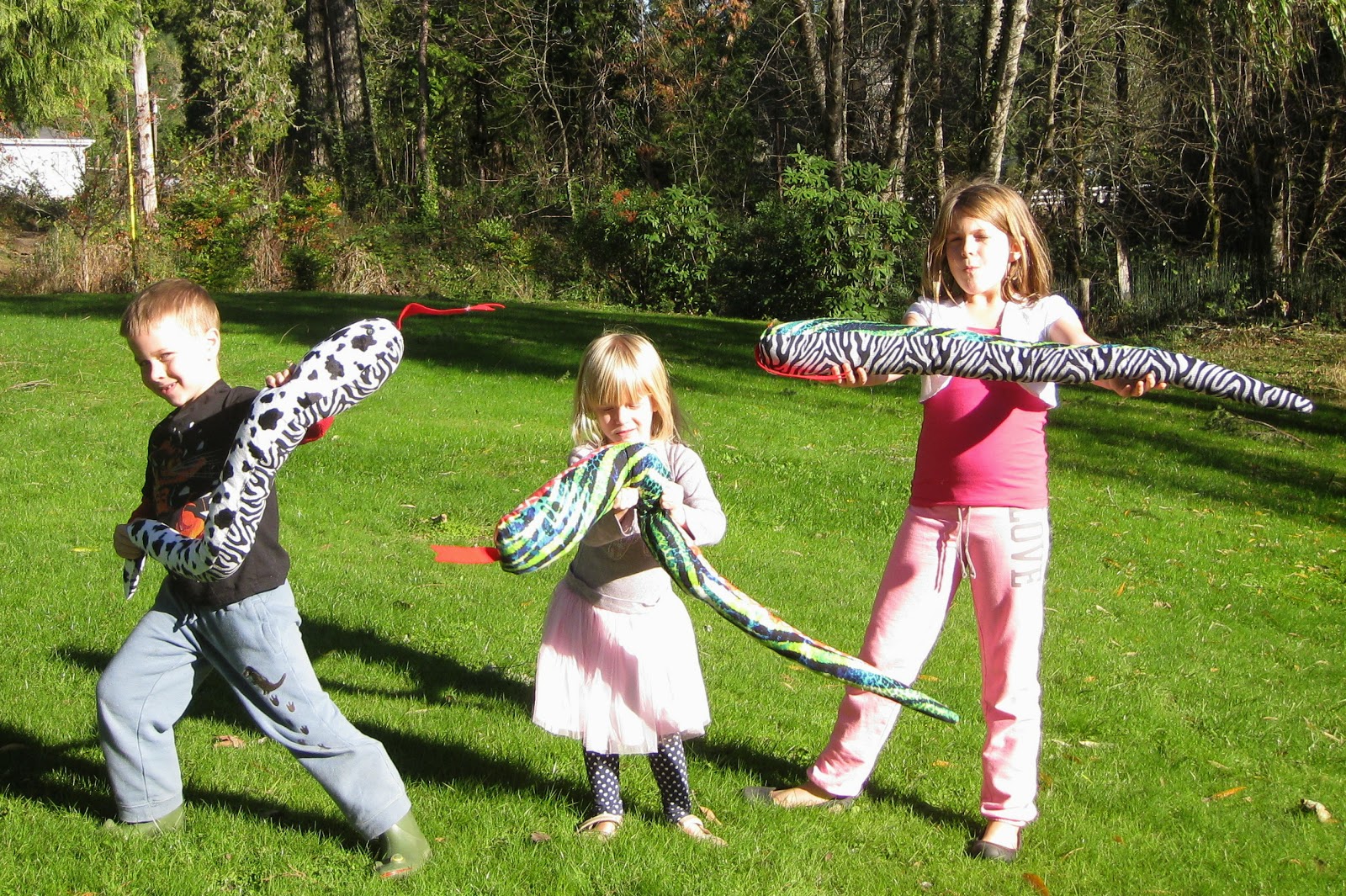 Posted by Margaret Godfrey at 11:28 AM 4 comments:

Pele Reaches Into My Blog 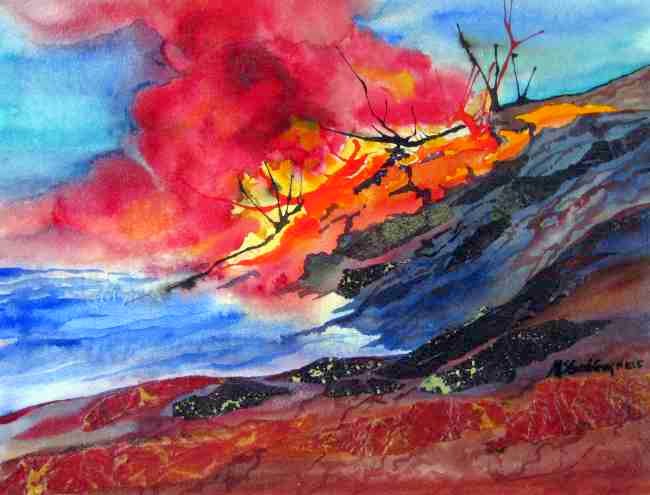 As many of you know, my husband and I lived in Hawaii for two years several years back.  I painted many pieces about the volcano we were living near, Kilauea. My abstracted landscapes were an important part of my artistic development. At that time the lava was actively flowing into the ocean, making for some very dramatic scenes, which I'd photograph and later use as inspirations for my art.

I was fortunate to be represented by the Volcano Arts Center in the Kilauea National Park, where my art sold quite well. But when we moved away, I closed my connection with the gallery, as well as ended my volcano series.

Back in 2010, an elementary art teacher who has her own blog http://linesdotsanddoodles.blogspot.com/, featured my blog post as a reference for teaching art using a volcano theme: http://margaretgodfreyart.blogspot.com/2010/03/odds-and-ends-week.html. Over the years I have noticed quite a few blog hits on my blogspot through her site. but since the latest eruption is heading toward a town on the Big Island, the traffic has greatly increased.

Recently, Pele has changed the route of the lava flow, endangering Puna and the small town of Pahoa, Hawaii. Interest in teaching about volcanoes has increased, consequently, there has been a lot more activity looking at my 2010 post.

I am fascinated by what this says about our internet interconnection. I have had so many people looking at my art and my words, indeed my life, through this connection with Holly B., art teacher in Maryland.  I love knowing that my blog and Holly's blog are still active and I hope all these wonderful teachers are inspiring students to weave science and social studies with art.

I still have a number of my Volcano Series paintings. Contact me if you would like a little Pele on your wall! 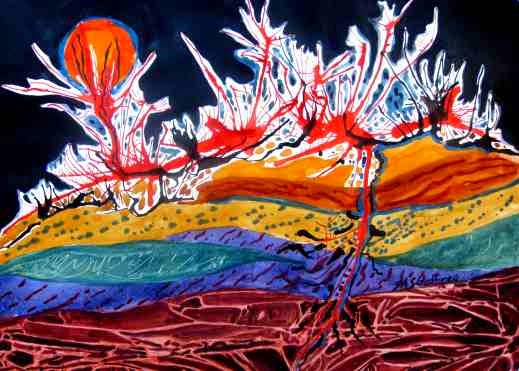 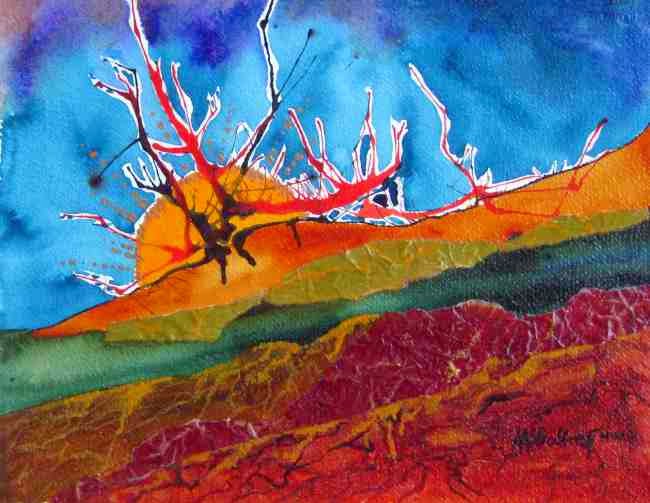 Posted by Margaret Godfrey at 2:28 PM No comments: