A Star to the East (of Blue River)

In 1987 Mike and I bought the house that we remodeled and lived in over decades. We raised our daughters, entertained family and friends and created a special spot in the hearts of many. But at Christmas, it had a special feature, a bright star hanging 100+ feet in a tall evergreen.

We discovered the original star in our barn, shortly after we moved in to our home. It was five or six feet across and made out of rebar--that made it very heavy. It was a family affair, choosing light colors (before rope lights or leds) and attaching them securely to the armature forming the star. We had debates about where to put it--on top of the pump house our in the pasture? On top of the garage or house? In a tree top? 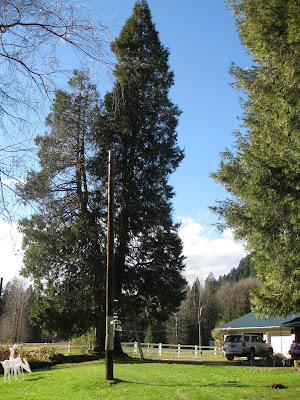 The winner was a tree top! Mike was still in his 30's and feeling quite able, so he started climbing a very
tall cedar tree in the middle of our round-about drive, with rope and pulley. The girls and I stood far out the drive with the star attached to the rope and kept it taut to avoid tangling with the limbs as Mike pulled it up to the top of the tree. With a bit more engineering, he maneuvered a long extension cord up the tree trunk and we proudly lit it up for our community and winter travelers driving up and down Highway 126. Every year we'd have a neighbor or friend ask when the star would light up, and every year we would plug in the extension cord on the day after Thanksgiving. The timer was set from dusk to dawn. We would imagine weary truck drivers heading toward the snowy mountain pass getting a moment of joy from the shining star.

Eventually, that treetop died, and we had to move the star to a different tree. Mike also decided the rebar idea was not the best metal to use and had an aluminum star made. This time he was no longer as young and agile as he was in his 30's (plus his wife said absolutely not) so we hired a young tree climber to take this much lighter star way up a different tree. Another new thing was rope lights, making the attachment of Christmas lights so much easier. On the day after Thanksgiving, we plugged in the extension cord.  And so once again there was a star at night to brighten a traveler's trip up the McKenzie Valley.

And on it went for many more years until  September 7, 2020, when much of the McKenzie Valley burned down, including our home and the tall evergreen that housed the star. Here is where the true spirit of Mike Godfrey shows up. If you know Mike, you probably have your own view of the kind of person he is, but the rest of this story might surprise you.

In the midst of the grief of the loss of our home and the loss suffered by so many others, he contacted Mercury Metal in Eugene https://www.mercuryequip.com/ and arranged to have a new 7 foot aluminum star manufactured. Then there was a little distraction from the project as he had a bilateral knee replacement. But as he was recovering from his surgery he tapped into his engineering brain and began to figure out how to use solar power to light up the star on our burned up property with no electricity.

On November 13 we picked up the star, attached it on our 1947 trailer and took it to the house we are renting in Eugene. 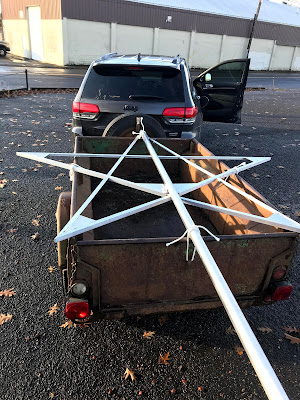 Once we got it to the house, we had to attach LED strip lights (made for RV's) to the star. We also got help from our handy and brilliant nephew. He built a lovely structure to house the controls and battery to run the star once up. He also helped Mike in figuring out the electronics of the whole operation.

But who would climb the tree? Never fear, there is always a wonderful volunteer willing to help in these kinds of crazy situations. Jason Wickizer, a volunteer fire fighter/first responder from Iowa, came to the rescue. He was not only willing and able, but loved being part of giving this hopeful sign to the McKenzie Valley. On November 20, we traveled from Eugene to Blue River with a group of willing helpers to set up the solar power and get the star 100 feet up a tree.

Oh what a day it was!  At the end of it we had continued a tradition that meant for us, "we are coming back." For our community, it was a symbol of hope. You can burn us down, Mother Nature, but our spirit is still strong--McKenzie Strong.

Posted by Margaret Godfrey at 6:14 PM No comments:

Fire: From My Mind to Paper with Three Tools

Again, I marvel at how time passes. This is only the second painting I've created in the last month, yet it is meaningful. It lived in my brain for a length of time before it moved from inside to out.

Of course it was inspired by the evacuation from the holiday fire itself, and our multiple visits to our property. Seeing the dead trees and forest surrounding our ruins has a huge impact, each time we are there. 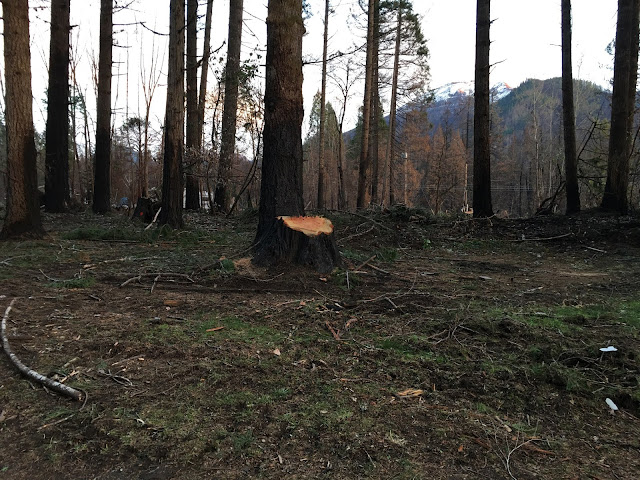 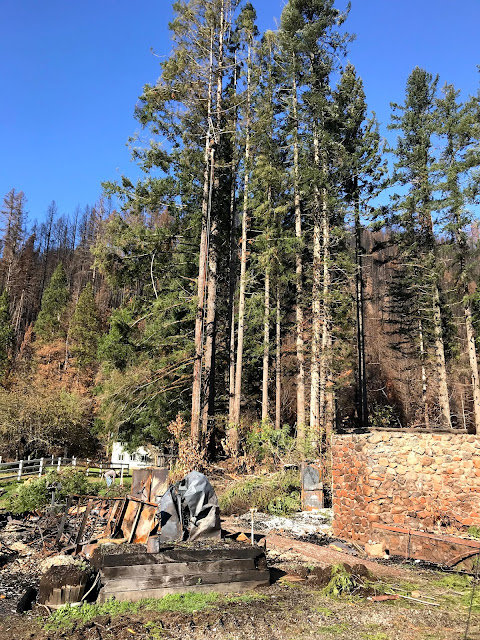 The steps were simple: Wet the paper, leaving interesting corner shapes, then apply paint while wet. 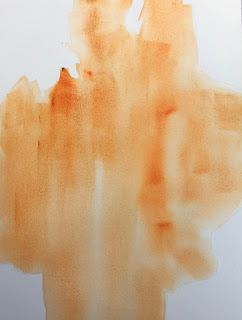 Oh, there must be darks! (indigo) 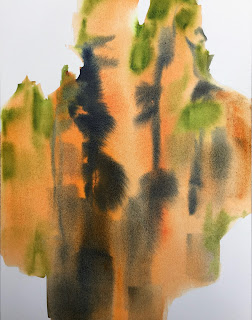 Let it dry, and let the mind's image develop. 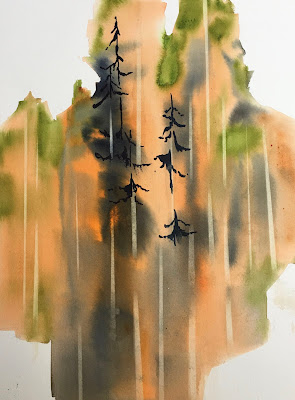 Next, lift some trunks using straight edges of velum (a paper resistant paper). Then start painting in the burned trees. 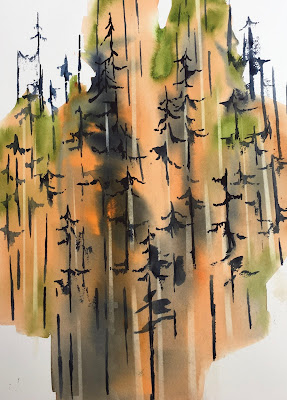 And here's the tough part: dish out some black gouache (opaque watercolor paint) grab a paint scraper and sweep across the image over and over. Add some FIRE on top of that with orange/red gouache.
I am avoiding getting overly emotional with my verbiage--the painting should speak to that.
All this was done with just 3 tools, a 2 inch flat wash brush, a rigger and a paint scraper. 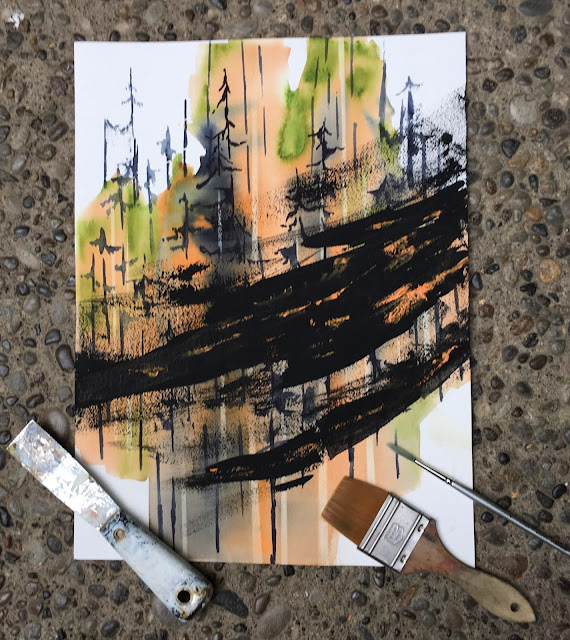 Posted by Margaret Godfrey at 12:17 PM No comments: