Welcoming in the New Year 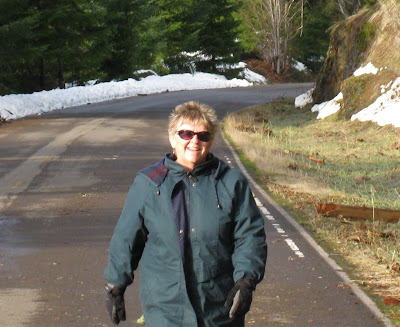 Years ago I gave up New Year Resolutions because they were doomed to failure. I resolved to lose weight yearly, yet remained round. I resolved to exercise regularly, yet my genetic default trait was still sedentary. You know how it goes. Year after year the resolutions would rack up in expectations of me becoming a different person. Quite depressing if you ask me.

But three years ago I began my year with something I found both doable and uplifting. It wasn't exactly a resolution, but a commitment to dealing with things in a better way. I dedicated myself to working on forgiveness. I don't mean to make this sound pompous or overly serious. I simply found that holding grudges and beleaguering over wrongs or slights from the past just made ME feel bad and kept a nastiness in my being. It's an ugly thing for one's spirit. It is not something that I really could entirely accomplish, but being mindful of the harm not forgiving did to myself and the lack of change it instigated in anyone else, helped me move forward in having better relationships and feeling more positive about myself.

This year I added another similar goal to my own reactions to others and that is to assume that the other person is doing their best.

I grew up in a family that enjoyed analyzing family member's and friend's behaviors and circumstances, which led to assigning motives to almost any action. One way of looking at this sort of analyzing is that it is a way of trying to understand the world and how people operate in it. But another way to look at it is that it is a way of making yourself feel superior. In reality, most of those analyzing sessions put the person under scrutiny into an inferior position. Their decisions were poor ones and we (the analyzers/gossipers) would do so much better.

So now I have added another way for me to be mindful--assume the other guy is doing his/her best. That should free up my mind for thinking about more useful things rather than filling it up with how my friend, neighbor, relative is messing up.

Okay, enough about my self-improvement program.

This has been a celebratory few weeks: Christmas, New Year's, and a 39th wedding anniversary on January 2. I just have to say, I am a lucky, lucky woman to have stumbled into what has turned out to be a wonderful, life-long relationship. Mike is a great companion and we still respect, love and appreciate each other. 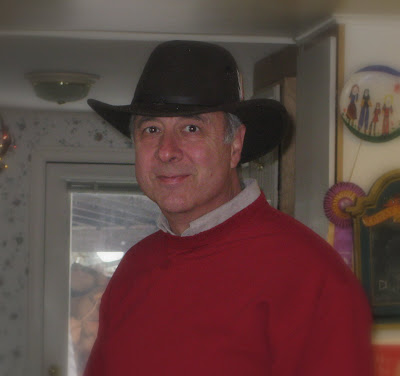 I'm going to end my blog with a slice of life true story. Today Mike went into town with a bunch of errands he hoped to complete before a dinner meeting this evening. One thing on his agenda was to get a hair cut. Several times he's had his hair cut at a small, one-woman operated salon/barbershop in a rural shopping center, so he called to see if her shop was open today. The woman's grandson answered and told Mike that his grandmother (the hair dresser/barber) had died recently. She had some pains around Christmas and saw a doctor soon after. She was told she had cancer, with just a few weeks to live. A week later she died. She was about our age.

I'm going to live to the fullest today, and assume I'm doing my best! I hope you do too. 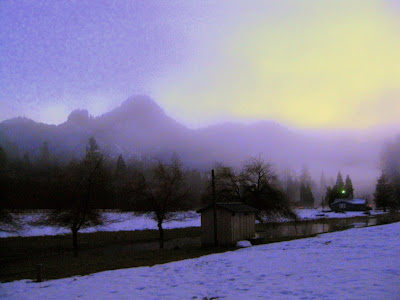 Our place a few nights ago.
Posted by Margaret Godfrey at 11:29 AM