Gifts Await in My Studio 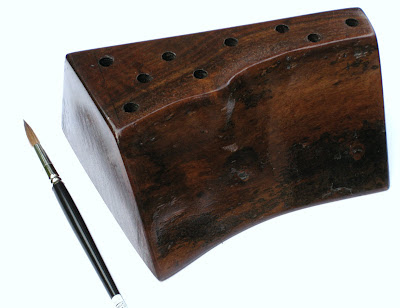 This summer was full of family, barbecues, rafting and more family. Last year I decided that to truly enjoy summers, with my grandchildren in particular, I had to let go of the idea of finding serious painting time. I get two or three months with kids and the rest of the year for art. Although I sometimes struggle and get grouchy about the lack of time in the studio, I think it's a good trade off. There won't be that many years that Mimi and Dabbadoo are so popular with the grand-kids.

During the summer I received two gifts that have been sitting in the studio waiting for me. First was a generous "thank you" gift certificate to Cheap Joe's Art Stuff from my sister. I thought about buying my usual supplies: paper, paints, gesso and the like. But then I realized that her gift would be much more memorable if I bought something that I would not buy normally. That is how I became the proud owner of my first $100 plus brush--hey, it's a Raphael Martre Kolinsky Brush!

The other gift came as a huge surprise. A friend of mine who now lives in my old hometown of Grants Pass, Oregon, made me a unique solid walnut brush holder. That alone is special, but this piece of wood has been aging for years and came from a tree my dad cut down on the place I grew up 30 plus years ago. I have to say, it definitely brought tears to my eye.

So this past weekend, I dragged the house vacuum out to the studio and did some serious damage to the spider population. My studio, a finished room out in our barn, is a real haven for bugs and spiders not to mention it accumulates dust, hay and the like. And since I had not been out there creating much, the surfaces had collected piles of stuff.

Before and after cleanup: 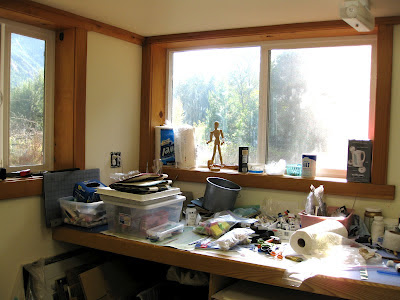 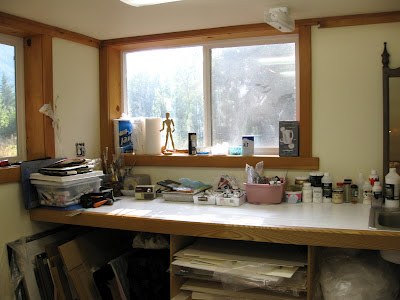 And ever since my cleanup session, I've been out in the studio working on finishing pieces and starting on new stuff--but that's for another post.
Posted by Margaret Godfrey at 9:16 AM

I love new art supplies and a clean studio!!!! Enjoy that new brush, it looks like a beauty and the holder will always bring special memories, I'm sure!

Aloha Margaret,
I love your posts. They are so real and down to earth, and funny. Miss you and Mike.
Aloha,
Mahealani