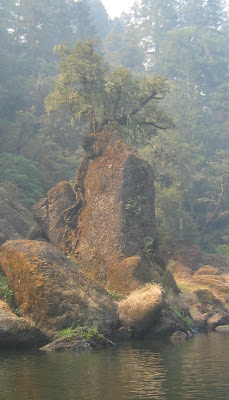 Years ago I took my first rafting trip down the Rogue River's Wild and Scenic section and was struck by this fascinating tree perched high on a monolithic rock, its roots reaching many feet down to find a source of nutrition. Since that first trip, I've witnessed the continued struggle of this wonder of survival each time we raft the river. And several times over the years, I've tried to paint this in a way to convey it's impact on me as an artist, but I have yet to do it justice.

I once took a workshop from fellow artist Michael Schlicting where he said that sometimes we are just not ready to paint a certain subject matter, but our skills will build and at some point we will be ready. And so I've been waiting to be ready.

I have been working with adding rice paper and gesso onto the surface of my paper before applying any paint, then using transparent watercolor which gets absorbed and resisted, creating very interesting textural effects. And so I started this painting. 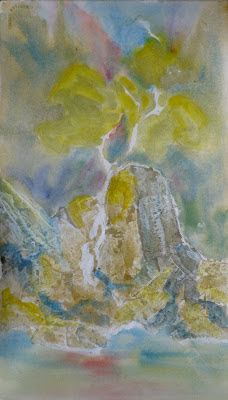 I continued with some new colors I'd bought and ended up with a purple and yellow competition of colors that I did not like. This version did not convey what I wanted--for one thing the tree and it's roots have been lost. So I took it to the sink and washed off all the paint that I could. After it dried I started over. 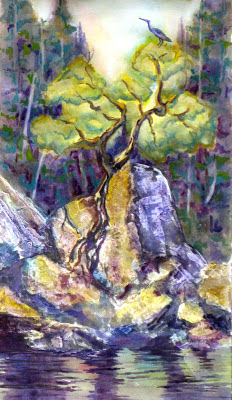 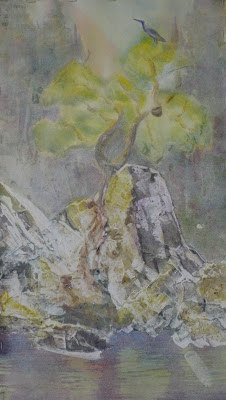 This time around, I emphasized the tree and roots. I had lost what was really one of the main points of this subject matter. I also added a story line for the herons, instead of a single sentinel, I creating a pair interacting with one another. I was frustrated with the blandness of the watercolor, so started adding collage to give the painting some oomph. It was overbearing, so I moved on to painting some gouache on top of the collage to  create more unity and harmony. Also, I wanted the tree to be the most exciting part of the painting. 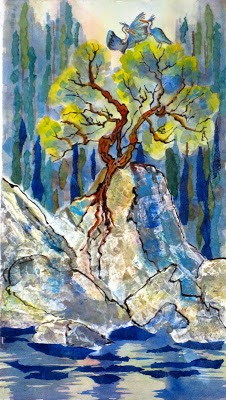 In this final image, I have hopefully unified the background and foreground, while letting the tree stand out among the rocks. I have yet to have the skills to entirely meet the subject matter, but it's much closer than earlier attempts, and I know I will keep at it. What I can say is I am not totally unhappy with this piece. 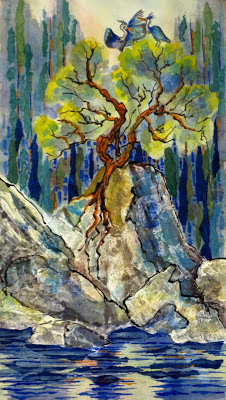 Posted by Margaret Godfrey at 10:04 AM

The color shifts you made between original photo and each successive interpretation are interesting. I wonder what might happen if you tried yet a different palette?

Thank you for your heartfelt sharing and teaching. Jennie oxoxo