This summer we were able to take the trip to South Africa that we had planned for last year. Because of the world wide pandemic, the trip got moved to 2022. It was a dream trip chosen by our grandson, Noah.The big goal of the trip was to see animals in the wild, but we also wanted to learn a bit about the country beyond the game reserves. Flying to South Africa involved 2 ten hour flights: one to Amsterdam and the next to Johannesburg. That's definitely an achy joints sort of voyage.
Our time in Johannesburg was brief (2 days), but we managed to see quite a bit of the area. Mostly I was interested in learning about pre and post Apartheid. (I highly recommend Trevor Noah's book, Born a Crime.) We hired an uber driver to give us a tour of Soweto, the township originally set aside by the South African white government for residence by Blacks. Nelson Mandela lived there for a time so there is a bit of tourism going on.  As I write this, I want to be clear that I am not making judgements about S. A., but just imparting facts as I experienced them. S.A. is still a developing country.
We were fortunate that our black driver was open to share so much about the current situation of living in South Africa. There is tremendous poverty among blacks (80% of the population). The wealth of the country continues to be primarily among the white population (20%). The original homes still stand--4 room houses on a very small space. Along with the houses are shacks made of corrugated metal and plywood.

The Airbnb where we stayed was in a wealthy white neighborhood where all the houses have 8 foot walls topped with razor wire and electric fencing. One has to believe that the crime rate is high in the city. We experienced the loss of a wallet and passport while there, and later had our credit cards cloned. The passport was replaced in one day at the American Consulate and our credit card companies immediately let us know of the fraudulent use.
We were not unhappy to leave Joburg and fly down to Port Elizabeth where we rented a car and began our drive from Port Elizabeth to Kruger National Park where we would spend our last week. Once away from the big city, we found the people of South Africa very friendly and helpful. The country was happy to be opening up to travelers as that is a big source of income for the country's businesses. Mike did most of the driving on the "wrong" side of the road, shifting a stick-shift vehicle with his left hand. Miraculously there were no wrecks and only a couple of honks along the way, but a great deal of sweating in the driver's seat.  We did find an amazing amount of potholes which caused a flat tire. Noah learned about changing a flat for the first time in his life.

We planned our trip ahead of time, making all of our reservations in advance. Kruger especially is a very popular National Reserve for South Africans as well as travelers, so those spots had been reserved months ahead. I use the term travelers rather than tourists because we almost always do our own planning and driving in our foreign visits. Signing up for safari's would be much easier, but we would not have had nearly the adventures we did being out on our own. As we drove from Port Elizabeth to Kruger, we stayed in a variety of inns, lodges, and airbnbs with only one hotel in the city of Nelspruit/Mbombela.
The first two game reserves we visited on our first week of driving were Addo and Hluhluwe. All these parks allow the visitor to drive throughout the park during the daylight hours. Addo National Elephant Park has a "hop-on" guide service where a guide will get in your car and travel through the park helping the travelers to spot the animals. Our guide really helped us develop our vision to sight animals.

It is unbelievable that an animal as huge as an elephant can be hard to see in the brush. Suddenly the animal appears just a few feet away from your car.

After several days of wild animal viewing, we stayed at an old ranch at a higher elevation. This cattle ranch was at one time a dairy farm that has converted the cheese factory into guest rooms. We spent 2 nights there resting up, getting laundry done, and seeing a different part of South Africa. So on our last week we made it to Kruger National Park which covers an area of 7,523 square miles, the size of Wales. There are around 20 different bushveld camps and rest camps. We stayed in four different areas of Kruger where you could hear lions roar and hyenas howl at night. We did see the "big 5" while there: lion, leopard, rhino, elephant and African buffalo. Why giraffes aren't included, I don't know, but when a giraffe crosses the road in front of you, it is amazing!
Every day in Kruger we spent hours slowly driving around on mostly dirt roads. It was an easy enough drive there that I braved driving some of the time. Our necks got pretty tired of craning from left to right. There were dull times and then other times when we would come across a herd of 20 to 30 elephants with young. Those moments were stunning. Over time we learned to stop and enjoy looking at the animals for as long as we could rather than driving on to see as many different animals as possible. Our check list of species grew. We saw only one lioness from a great distance. That was Noah's greatest wish, but she was so far away, we weren't quite satisfied. Then on our last night in Kruger, we took a sunset drive which is a guided group trip. Not only did we see a lion, we saw six lions lying on the warm road right in front of us. They were in no hurry to get up and move, so we had many minutes of watching them. We also saw a pack of wild dogs feasting on an impala that evening. It was the perfect climax to our stay a Kruger.
Here are some of my favorite photos. 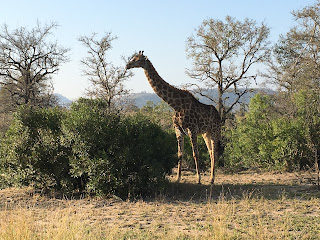 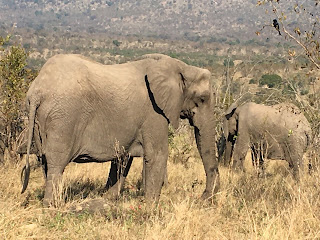 One last piece of our trip is what Noah brought home from South Africa: infected spider bites which he is still dealing with 10 days later. 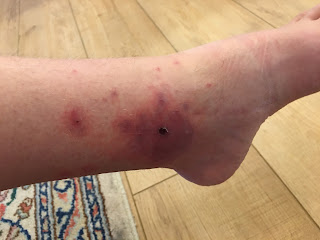 Posted by Margaret Godfrey at 2:32 PM

What a spectacular travel experience with Noah! I really enjoyed your stories, Margaret, and the photos are incredible! What a glimpse into your world! Thank you!

Thank you for sharing your adventure. Loved the photos & narrative.

Amazing. Definitely worth the flights. Thanks for sharing!