"Painting is just another way of keeping a diary." Pablo Picasso

My first 2-week adventure in art with this group was 2014. I traveled with my good friend Kathy Tiger who was a veteran of this art retreat. She already knew most of these artists who traveled from all over the US and Canada to work with Katherine Chang Liu. As a newbie, I arrived with art supplies and grand ideas of what I would paint.

My idea was to paint about my younger daughter Rachel, who had just undergone an Haematopoietic stem cell transplantation (HSCT) to stop the progress of Multiple Sclerosis. For several months my husband and I had been a part of her support team, so I came to the art retreat with plenty of ideas. At the beginning of the retreat, I met with Katherine and showed her 8 pieces of my art and began to share my stored up ideas about the last 6 months. As tears welled up, she put her hand over mine and said something to the effect that my recent experience with Rachel was perhaps too raw. "Looking at the work you just showed me, you do a lot with round shapes. What else could you do with circles?"

I returned to my chair, looked at the art supplies I was surrounded by and thought about round things. I thought about my home on the McKenzie River, thought about some paintings I'd done with herons, frogs, rocks. Suddenly salmon eggs jumped into my head. Beautiful orange, perfectly round shapes. And that led to thinking about the life cycle of the salmon which oddly related to the last few months of my life as a parent. So here is the first painting I did in September of 2014. That began my Life Cycle Series.

But then next year, 2015, I painted about Rachel. Her illness, her hospital stay, her recovery.

And on it went. Every year I went with an idea of what I wanted to spend the two weeks creating, yet rarely was what I ended up painting. So why would I be surprised that this year turned out to be the same. Somehow my new series idea, "Web of Worries" ended up being more about the humans in my life than the abstract creations I intended to work on. I am sharing some of the drawings that led to a few finished pieces over the two weeks. 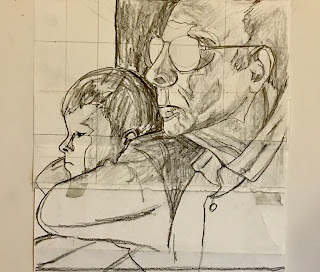 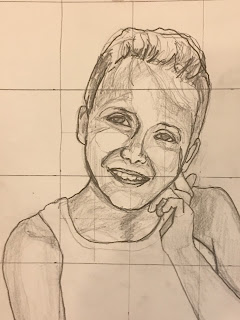 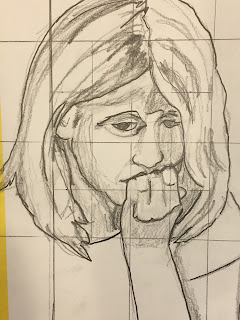 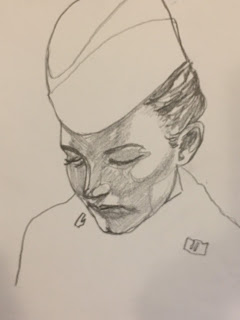 It should be no surprise that the faces of loved ones would end up in my "Web of Worries." These drawings led me into working on the concept behind the new series. I'm not ready to put out the finished work right now, but I'm sharing these faces as a demonstration of the hard work I did during the art camp. 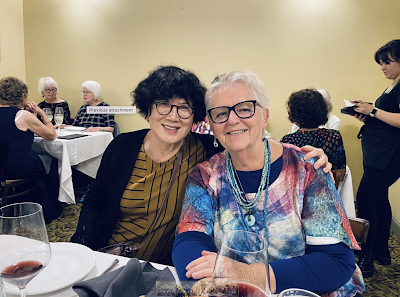 Thank you for your encouragement Katherine.
Posted by Margaret Godfrey at 2:08 PM

You are so welcome, Margaret.
I think your new series is a winner!
Katherine