Our 10 day trip started out smokey. We knew ahead of time that we were headed for forest fires on the Salmon River, but because it is a trip requiring permits, we had to go on the dates we'd requested in January. 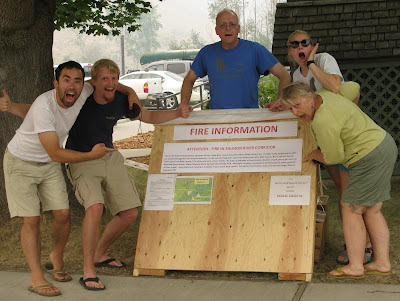 On our way into our launch site, we passed a large fire fighter camp, with tents galore. 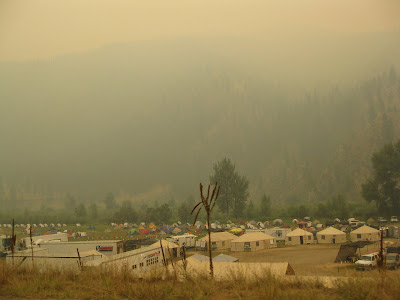 As we began our trip, the sun shone through the smoke filled sky as a red to orange orb. It felt as though we were on a foreign planet. 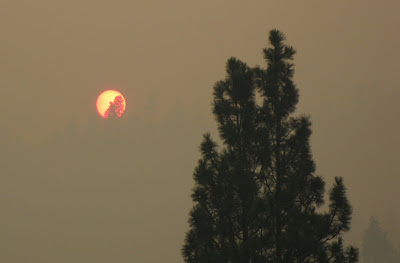 Early in the trip, I tried to capture the atmosphere in a small sketch. 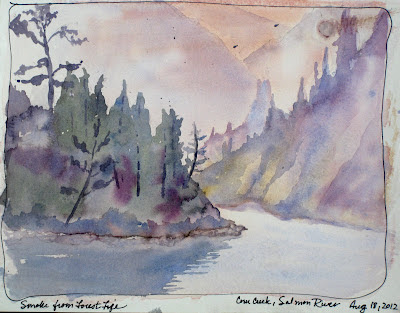 The air was so full of smoke, we wore damp handkerchiefs to filter out some of the smoke going into our lungs. Here is my bandit oarsman . . . 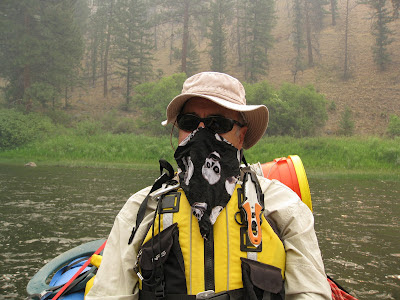 and his masked passengers--me with our granddaughter, Angelica. 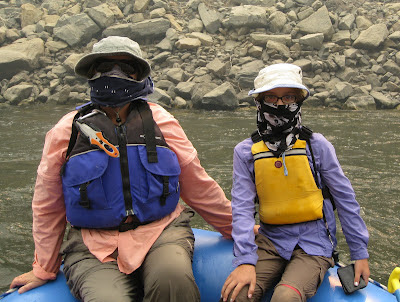 We floated through the active fire. Here are 2 of our 5 raft, one kayak, 16 people party passing by burning trees. 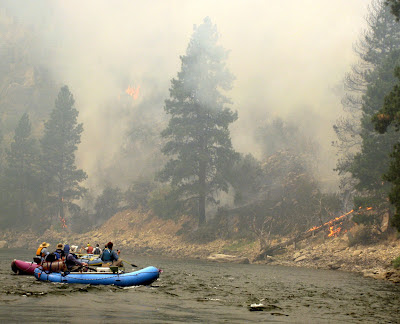 The smoke created beautiful colors in the water, 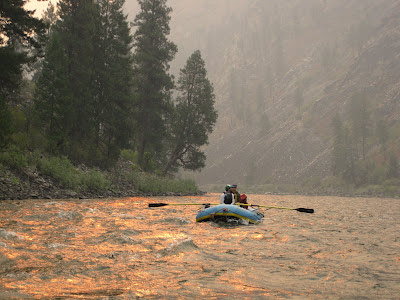 and mystical landscapes reminding me of Chinese paintings. 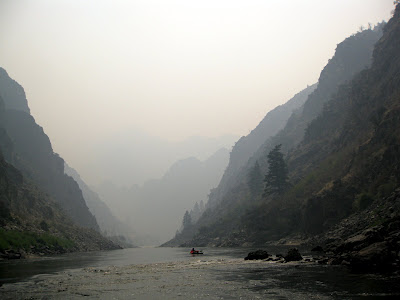 We saw many eagles on this trip, both bald and goldens. The smoke seemed to confuse some animals as we saw bats flying during the daytime and insects were more predominant than other trips. A small black deer fly was extremely aggravating on the first half of the trip. They were in abundance, and bit non-stop on the lower legs and feet whenever a person stopped moving. They also were unwelcome passengers on our rafts. 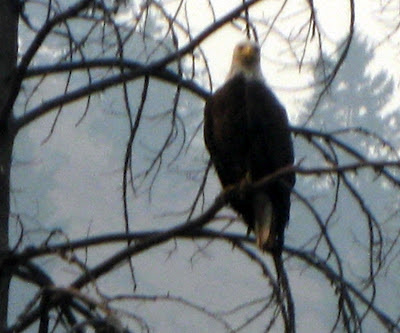 All along the wild and scenic section of the Salmon, we saw evidence of mountain sheep (pellets), with occasional sightings. 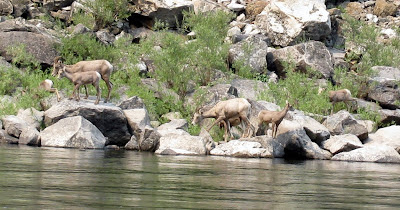 Eventually, we moved past the fire and a storm front blew the smoke out of the canyon. 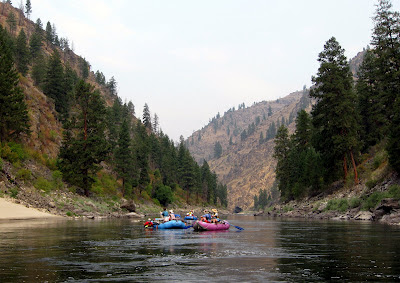 We were able to focus on the amazing Salmon River rock formations . . . 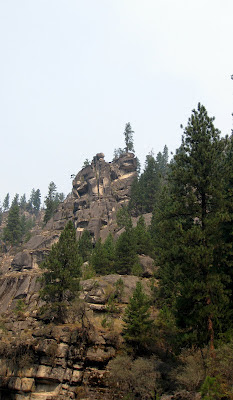 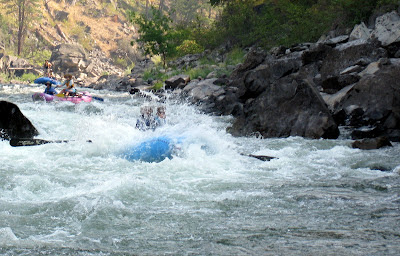 Can you spot the kayak in there? Look for a blue front tip and a red helmet. 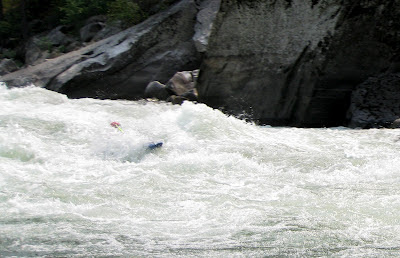 I found time to do another sketch of a creek running into the Salmon. This time the colors were bold, not subdued by smoke. 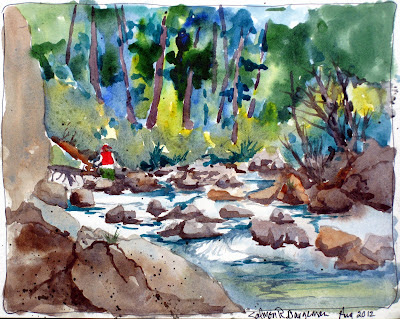 Our granddaughter learned to maneuver a raft, starting on the small raft our great-niece, Emily, and friend, Liesl, rowed down the river. 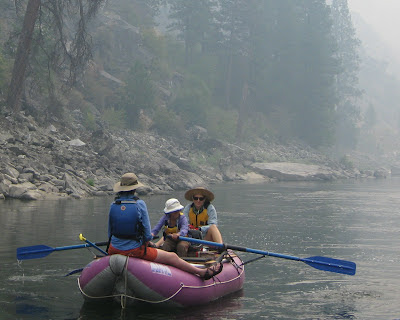 Angelica also liked raft hopping--here she is on the Big Boy raft with our great-nephew, Daniel, and friend, Kevin. 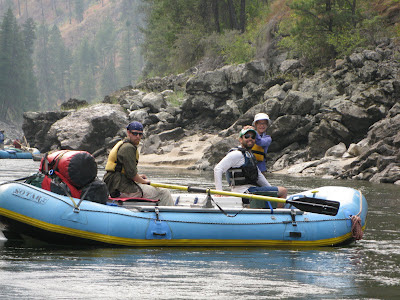 The "Girls Just Want to Have Fun" raft. 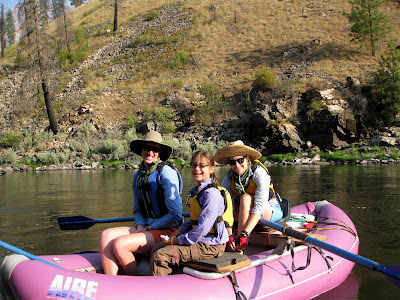 All good things must come to an end, and here we are approaching take-out. It was a fine trip--all rafts and the kayak came through the rapids "messy-side" up (upright). Stay tuned for the upcoming Rogue River post. 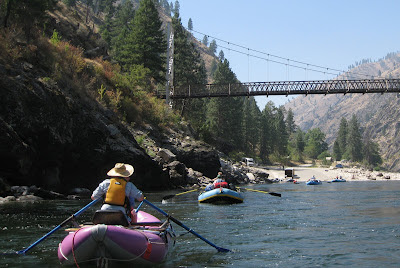 Posted by Margaret Godfrey at 10:28 AM

Wow- 10 days is a long trip! Where did you put in & take out? How many days were you in the active fire area? That smoke looks pretty bad. Sorry you had to deal with that... I know it can be hard to live with for long periods! You traveled some beautiful terrain & I'm pretty impressed with your sketches!

Margaret...thanks for the photo story. I'm so glad you-all had a good trip in spite of the fires. I was concerned when Iheard that roads had been closed, but then you are veterans of previous fires on river trips. Here, all OK post Isaac. Metro New Orleans fared very well, except just about the whole city was without power for several days. Stinky refridgerators, no fans or AC, no internet, etc. not a pretty picture. We're almost back to normal, though some folks outside of the city are still flooded and without power. I started a new class at Tulane yesterday..an intermediate abstract painting class. So far it's confirming my original impressions, that abstract painting is much more difficult than representational painting. Hope I learn something. Cheers, Julie

Thank you for sharing your trip. Great material for some new art work. You are SO lucky to be able to do these incredible float trips!
Marline

Larry and I just returned from Anaheim. We only went to Dland two days. Cool art things the other days.The rest of the gang, son and family, went four days. Had a blast. BUT in flying home we looked out our window to see major smoke in northern CA and OR. Looks like you did not let the smoke keep you from having a good time on the water. Loved your little paintings. See you in Welches.

What an amazing trip with all the fire and smoke. Your pictures took me there as usual. Thanks

The Respite Center is now ready to furnish. I finally opened your waterfall paintings. Rainbow Falls looks totally awesome in the shower room. Really gorgeous. Akaka Falls didn't fit, so it will be in the bedroom on the wall close by. It looks stunning on that wall. Many people will admire your work. I hope that feel great to you. I've got to see about framing. The one that is going in the shower room, I'm hoping for a special seal to keep moisture out. We'll see.

Glad you guys had so much fun on your annual trip. Petie