Art is My Lifeboat

I have been thinking a lot recently about my fixation with flying birds. They are taking flight in my paintings regularly. Of course, there are many obvious reasons: they are elegant and beautiful, they are part of my daily view, and they are a common subject most humans can relate to. But I know they have become an important symbol to me in the last few months.

Wouldn't I just love to take flight! I'm not a complainer, but I have to say this period of time has been a challenge for both me and my husband, Mike. We have been so attached both physically and emotionally to our home, that being displaced from those roots has been like being thrown to sea where we are riding the waves. There are the hopeful waves, the frustrating waves, the stormy waves, the calm waves. But it seems like there are just way too many more waves in the future than we want until we get to shore again. So that's when I want to fly up into the bright and open sky.

I have been looking at many pieces of art that have birds as the subject matter. And as was true for Van Gogh, Bernard, and many other artists, I have been drawn to the wood prints of the Japanese artists.

These two pieces are an homage to Ohara Koson (1877-1945), an artist known especially for painting birds and flowers. I really enjoy painting on long, thin pieces of watercolor paper, a format that suits this theme.  (These paintings have been purchased as a companion pair.)

I do love the egrets and herons, but I see so many songbirds in the trees off the deck of the house we are renting, that I think I may be painting some of those. I have really enjoyed adding the birds to my more graphic art pieces. 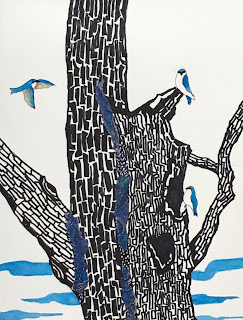 Early in the spring, the tree swallows flew into the river area in the hundreds. Their beautiful blues were enhanced by the sunny stream of light hitting their heads and backs. 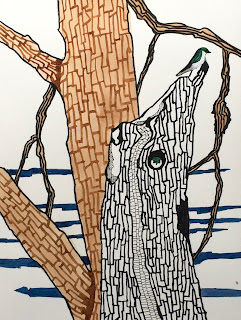 A few days ago, I was startled by an orange flash flying across the river. A moment later the flash clearly became a bird, as a Western Tanager landed in the tree right in front of me. It is always a special treat to see these birds, as they are more rarely sighted than the robins, swallows and finches. I know that the Western Tanager will be in my featured in my next painting. Perhaps I'll paint a pair coming right near the maple tree I see off the deck.

These lovely living creatures are a "wave of inspiration." So the waves aren't all bad, and we are navigating through them. I am thankful everyday that art calls to me and presents itself as my lifeboat.

Posted by Margaret Godfrey at 1:20 PM