More Birds and A Reminder Lesson

The other day, while standing on the deck overlooking the McKenzie River, an orange flash above the water caught my eye. I immediately did a visual search up and down the river (through the leaves of the big leaf maples) hoping to catch an identifying view of what I had just a glimpse of. To my delight, a few seconds later, a western tanager landed in the maple tree, close enough to clearly see him in all his glory.

These birds are among my favorites for two reasons. First of all, they are so flashy with their yellows and reds. (After all, we artists are suckers for color.) Secondly, they are rare enough in the McKenzie Valley that I only get  to see one once or twice a year. They prefer the more open coniferous forests on the east side of Oregon. In any case, this one small guy began a new creative urge. I tore a full sheet of watercolor paper into four 15" x 11" pieces and decided to paint each one featuring a western tanager.

In the last few weeks, I have started using a mouth atomizer as a way to create a gentle color and texture. I've also been studying the beautiful Japanese woodblock prints and mainly focus on the work of Ohara Koson, who used birds and simplicity in much of his art. So given my tools and my interest in Koson's art, as well as this flash on the river, I started a 4 part series of western tanagers.

With the success of the first three paintings, I confidently began #4. 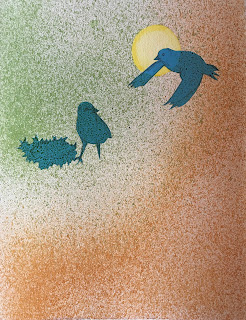 Now the reminder lesson:
Watercolor paint is easily reactivated. Even though the gold paint was dry, when I put my damp arm down on the painting to work on the upper portion of the paper, I created much unwanted blobs creating a disturbed area in the otherwise unified paint. Phewee!
I am pretty good at fixing things, but I could not fix these splotches to my satisfaction.
So once again the lesson is, always protect areas under the arm or wrist (unless you never rest your arm on the painting ha-ha) with a rag or paper towel.
I now have a new start to the nesting western tanager and I have a protective towel ready!

Posted by Margaret Godfrey at 3:13 PM