Gifts from the Universe

There are weeks that bring me gift after gift, and this was one of those weeks.

My friend, Ruth, invited me to her house to paint on Monday. What a great start to a week! She has a studio large enough for several painters, really, but on Monday it was just the two of us. We talked, we were quiet, we were talkative, we laughed, we shared ideas, and critiqued the ongoing work. A great day!

In the last few weeks I have twice seen a GBH (great blue heron) fly out of our front pond, but never with the camera nearby, nor really time to catch the bird in a photo. So seeing this magnificent creature is one thing, but I loved the tangible proof I found of it's existence. As I was walking along the pond's edge at dusk the other evening, I found this large feather. Who else could leave such a lovely quill? 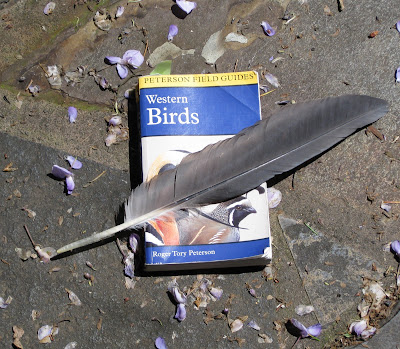 Two days ago I was talking to my friend, Dan, who enjoys birds as I do. We were comparing notes, and both remarked that this was an outstanding spring for birds and bird sightings. And then he told me that he had several of my favorite birds, lazuli buntings, eating at his feeders. I was jealous, as I had not seen one yet, and only hoped that because he is six miles down river from me, the buntings hadn't made it as far as my house. Well, sure enough, this morning I discovered 4 pairs of these darlings eating seeds left by the weeds in my driveway. Beautiful! 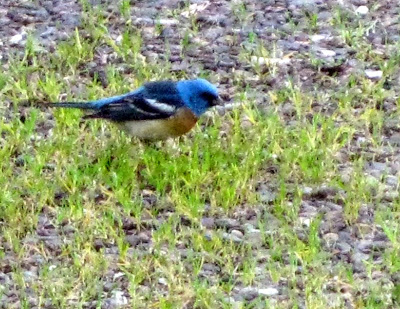 Another bit of welcome news, I had my follow-up appointment after last week's physical this morning. I seem to be in great shape, according to the lab work. Best news of all was that the small skin biopsy taken last week is not malignant! Again, a wonderful gift.

Now, if it's not asking too much, I will be much relieved to have Mike return in one piece from rowing the Colorado River down the Grand Canyon (a 3 week trip). He gets off the river tomorrow and flies home Sunday night. I will be so happy to have him home again in Blue River.
Posted by Margaret Godfrey at 4:25 PM

What a lovely note, glad to hear life is good for you Aunt Sue. I'm also glad to know when Mike is coming home because now I know approximately when Carolyn will be home to call. I wasn't sure when the river trip wrapped up. I had other things on my calendar this month... Keep enjoying those birds, I'm going out to fill my feeders now.

Thank you for sharing. I always love it when people can express so well their feelings & experiences. Marline

Margaret, Your visit was a gift to me too! I'm jealous of your Lazuli Buntings... maybe they will make it this far north eventually :) I know you & Mike will have a joyful reunion :)