Telling My Story in Art: "the rest of the story"

This has been an interesting painting to put out to the viewing audience. It has stirred up many stories and evoked many ideas and feelings in viewers. Before I tell you what inspired this piece, I'll share some of the ideas and comments I've received. I have been amused, touched and surprised.Best of all, I've discovered of many ideas that were not present when I began the painting. Sometimes I get deeper meanings from my own paintings as time goes on. 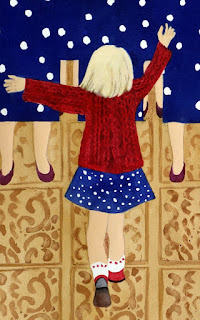 Because the main figure in the painting has her back to the viewer, her emotions are not revealed, yet she is a powerful little person. Most people interpreted her as happy. Many people thought of her as leading a choir, which makes sense because the women I borrowed from Gustav Klimpt are in a choir. Some comments were about her self confidence: every woman in the painting is accepting of her, and she is drawn to all the figures.

One of the most interesting ideas is that it elicits a political theme because of the red, white, and blue. Is it the "Year of the Woman?" Will the young voters put the first woman into the White House?

Some people wish they could have been that little girl. One of my sisters thought it was me running toward my older sisters. Another friend thought the little girl might just take a 90 degree turn and run another direction. She's a little teaser.

I purposely chose to put a uniform undemonstrative face on all the women. I thought about the 1950's and all women wearing dresses off the rack. If you lived in a small town, you might only have one or two stores to shop in. It would be likely you would see your friend wearing the very same dress.


Some of the painting was done from an artistic viewpoint, such as the red shoes. The repetition is very pleasing to my eye. Some clues were added as afterthoughts. The red shoes were confusing, so I added the sale sign and dollar signs to the shoes to indicate the women were shopping.

So here is the memory that sparked this painting. When I was three-years-old or so, my mother and I were in town shopping at the "Golden Rule" department store. It had a lot of sections to it, because it sold everything! It was easy for a little kid to wander off and loose sight of the parent and visa versa. So I did wander off and started to feel lost. My mom was wearing a navy blue polka dot dress, so when I spotted her dress, I ran up to her and grabbed her around her legs. When I looked up, to my dismay, the face at the top of the dress was unknown to me--it was not my mother, but another woman in a navy blue polka dot dress!

I find it totally amazing that one moment, one memory from over 60 years ago inspired this painting that has so many layers and deeper meanings. Thank you to those who have looked and shared your thoughts. So far, the painting goes untitled. 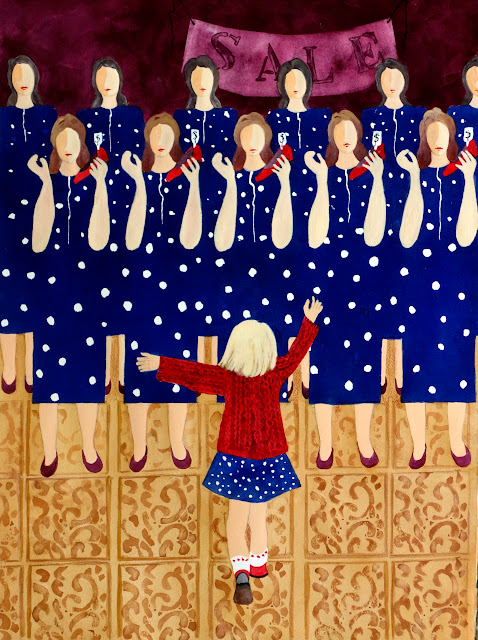 Posted by Margaret Godfrey at 11:08 AM