Developing a Concept--Step by Step

Success is dangerous. One begins to copy oneself, and to copy
oneself is more dangerous than to copy others. It leads to sterility. Pablo Picasso 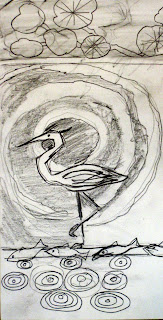 I've been asked where I get my ideas for paintings. This one came to me while on our last raft trip. I kept seeing a stylized heron against a broken up spiral shape. I finally pulled a sketch book out of my dry bag and started a sketch. I tried out some ideas that would put it into a strata painting, which I've used a few times in my River Series.

This image stayed with me until I got home and out to my studio. As I began to map out the concept on a full sheet of watercolor paper, I made adjustments to my original idea. One heron became three, the fish moved to the bottom of the paper and the rings disappeared. As with so many of my paintings, the art develops on the paper. 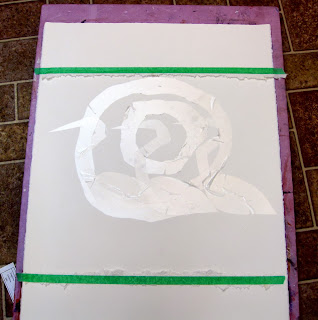 I wanted to create organic lines as I divided up the strata areas. Painting a truly random looking line is nearly impossible, so I started thinking of ways I might create a line without painting it. I ended up tearing a paper towel into strips to lay down (I taped the strip to keep it from moving) next to the edge of the first layer, letting the paint wick into the area. 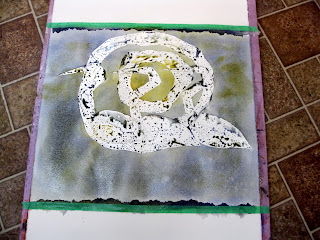 I covered my spiral shape and the 3 heron bodies with contact paper. I anticipated imperfect edges and decided to deal with those once I'd gotten my washes on the paper.

After seeing my first wash and thinking about the imperfect edges I knew I was creating, I used my mouth atomizer to spray over the section and add splatters. I was creating more spontaneity in the piece. 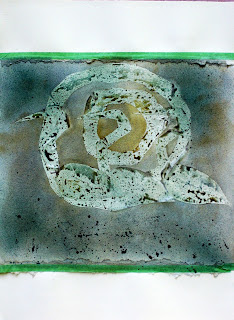 You can see the interesting edge that was revealed when I pulled off the tape and torn paper towel. I love the 3D effect it creates as well as the randomness of the edge.

My next step was to nail down a way to abstract pine branches for my upper panel of the strata. I practiced on a small scrap using torn paper towel circles to create an imperfect circular shape, then used line work to imply pine needles. 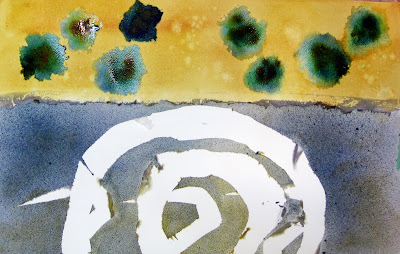 As I created the top layer, I decided to let go of the branches that I'd painted into my practice piece, leaving the images more imaginative and abstract. I don't have to explain my own symbolism, do I? 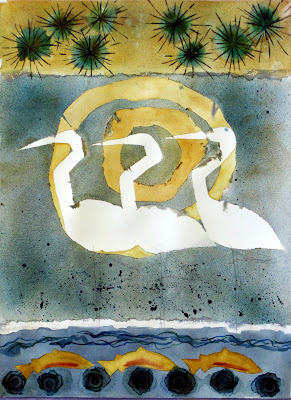 As I began the bottom layer, I chose to use the same circular torn paper towel pieces to create rocks under my fish. I used contact paper to protect my fish shapes as I worked on this panel. I liked sending the fish off in the opposite direction of the herons. I liked having a circular repetition in each panel, yet having very different organization of the shapes. The top is random, the middle is background, and the bottom is organized in a row.

As my focus switched to the main part of the painting, I began to embrace the idea of using the imperfections of the herons and spiral. I slowly enhanced those parts and used them to create interesting parts on each heron. 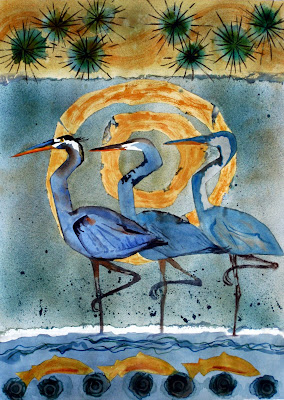 As each heron developed, I wanted to allow them to vary from somewhat developed to entirely detailed.

It was at this point that I sent my painting out to some artist friends. Their critiques led me to finishing the painting with much more impact and interesting details.

In finishing this piece, I added a dark background behind the herons to enhance their importance and create drama. I then used an exacto knife to scrape white into the legs and make the splashing water beneath the herons.

Posted by Margaret Godfrey at 9:21 AM

I like your explanation of each step. You have so much patience to describe each part in detail! Love your final title.

Mike gets credit for the title.