Another Big Trip--Spain, Gibraltar, Portugal with a Dido into Africa, Part II

At the speed of 190 MPH, it only takes a couple of hours to get from Barcelona to Madrid. Stepping out of the train station, it is immediately evident this is a city of government with fabulously ornate buildings. The Ministry of Agriculture is across the street from the train station and is quite an eyeful with the dramatic sculptures on the buildings top. 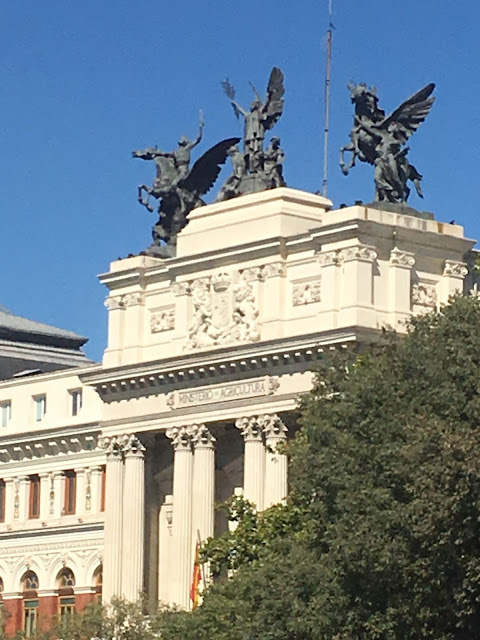 Although Madrid has been inhabited since the Stone Age, it only became a prominent city in when King Phillip II moved his court there in the mid 1500's.  I point this out because it is so "modern" compared to Barcelona where we were looking at structures built centuries before that. The streets are broad, and there is a much busier feel to the city.

After finding our next Airbnb apartment, we decided to take advantage of of the free entrance to the Prado Museum. Marin, our super smart phone user, had discovered the free entrance from 6-8 pm. What a deal! So off we went, walking along Paseo del Prado, a beautiful boulevard. Well, the free entrance attracted enough people to circle the entire building. 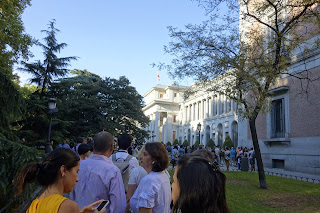 Because we are impatient people, and figured we'd be lucky to get in at all and maybe have 15 minutes to look at art, we had a change of course. We still had a few hours of daylight, so we headed off to the Royal Palace and Almudena Cathedral across town.
For some reason that we never understood, the Royal Palace was closed to the public the 3 days we were in Madrid, so we never got inside the building. However it is an impressive palatial building. 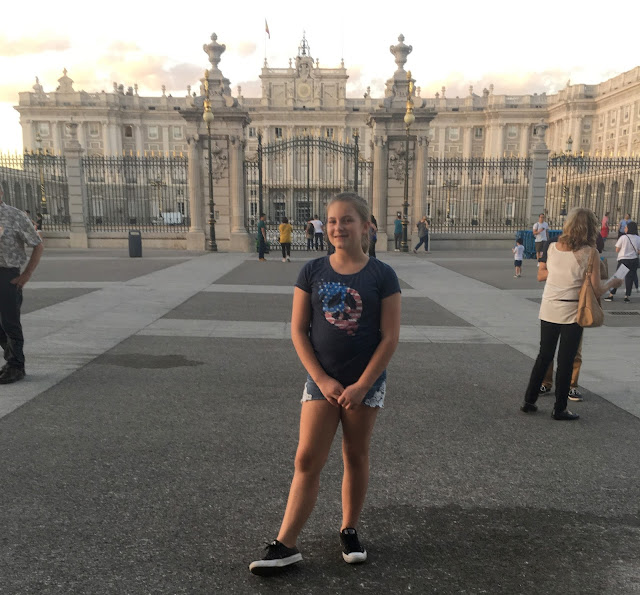 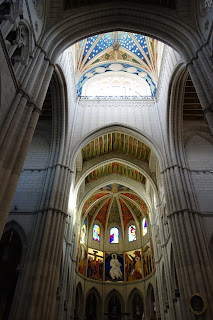 Built in 1735, it replaced a Moorish castle that preceded it. 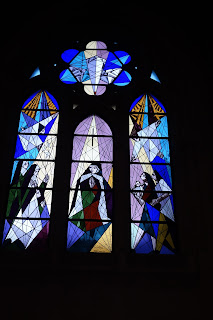 Across this vast plaza is the Almudena Cathedral. The construction of this Church began in 1885, but was halted by a Spanish Civil War and didn't come to completion until the 1950's. That explains why the interior looks quite contemporary. And remember when I talked about looking up? I was really impressed by the ceilings of this Cathedral. 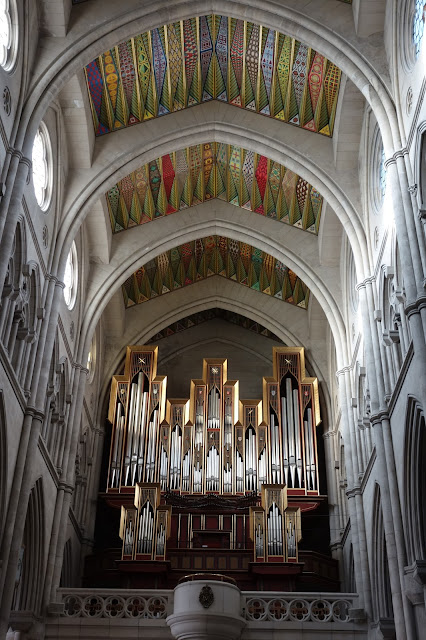 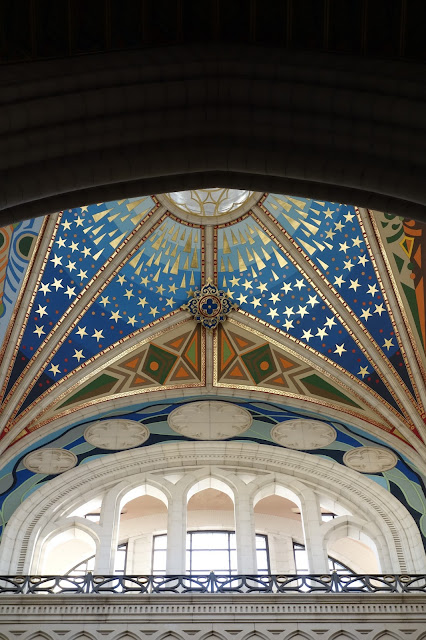 After visiting the crypt, underneath the cathedral we watched the Royal horse-riding guards put their horses into a large horse trailer and stuck around for a beautiful sunset from the palace grounds. Then it was time to seek out yet another dinner of tapas, beer, and lemon Fanta. 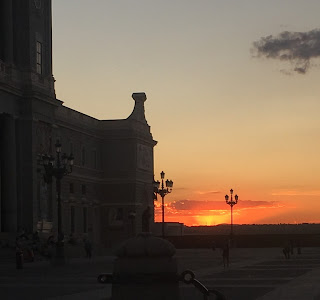 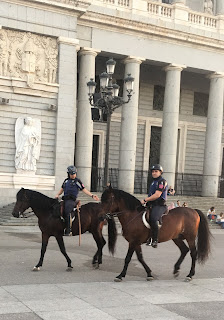 So we didn't get into the Prado for free, but the next day we went all out and hired a personal guide to take us through the museum. I found the art history fascinating, Mike was pleased that I was so pleased, and Marin tolerated it. My take away was that El Greco is an artist I have previously overlooked. I found his exaggerated figures, use of value, and use of ordinary, if not ugly,  faces captivating. The gallery was full of other greats, such as Goya and Valáquez. 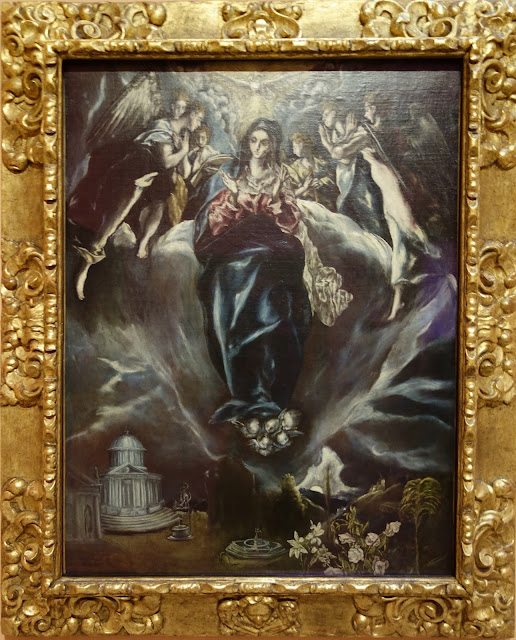 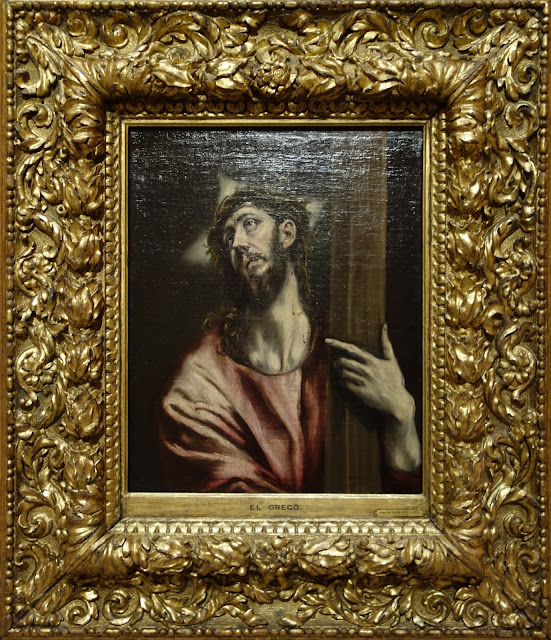 Our visit to the Thyssen-Bornemuz Museum was on our own, no guide. I knew it would have wider appeal to our younger traveler. Her favorite painting was pop-art by Roy Lichtenstien. 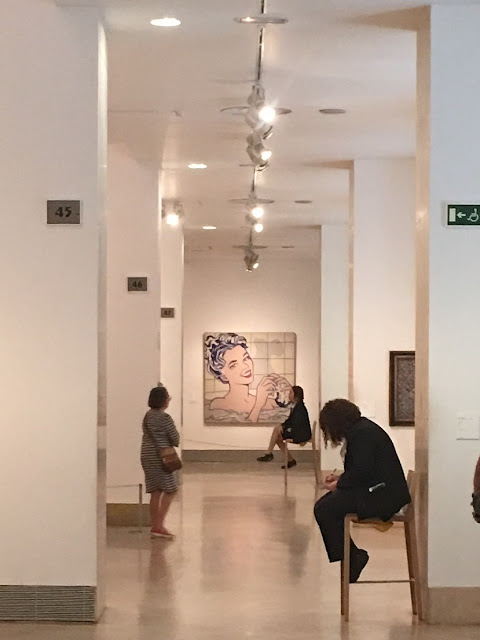 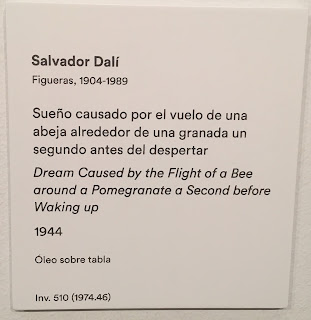 Since I am an artist always struggling to come up with a title for a painting, I got a kick out the the title of this Salvador Dali piece. He certainly did not spare the words! 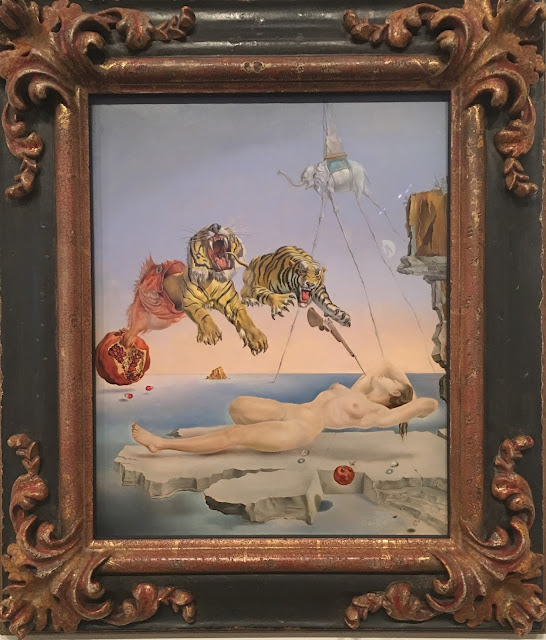 Marin chose this piece as one of her favorites, an orchid and hummingbird, painted by an American painter I had not heard of: Martin Johnson Heade. 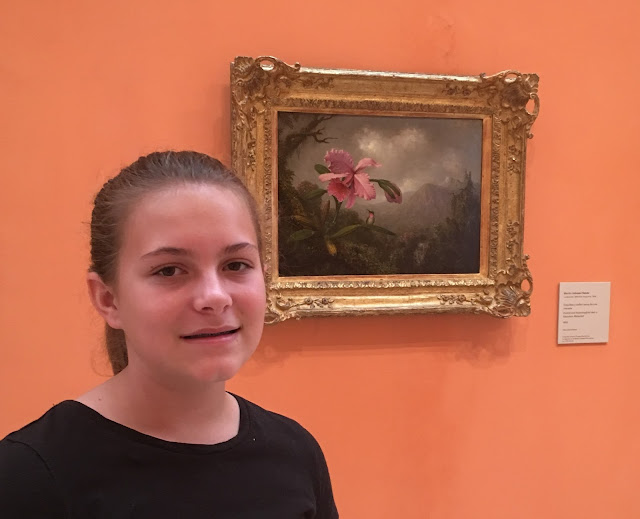 Always happy to get a bird's eye view, we visited the Communication Palace, City Hall, built in the 20th century. For a small fee you can go up into a tower and get a great view. Being modern in Spain is not at all like the cement blocks we were building here in the U.S. And the message to refugees is very clear! 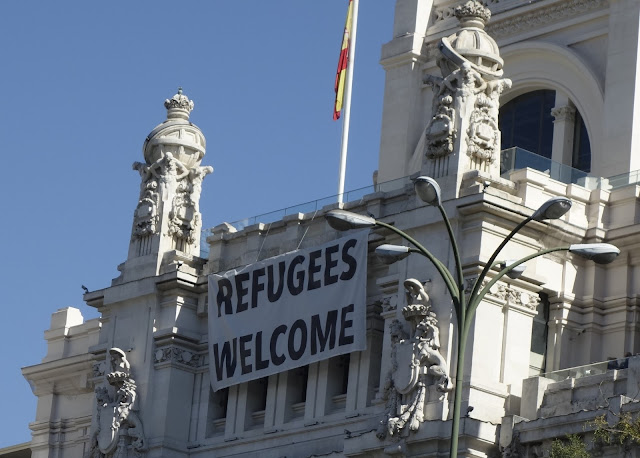 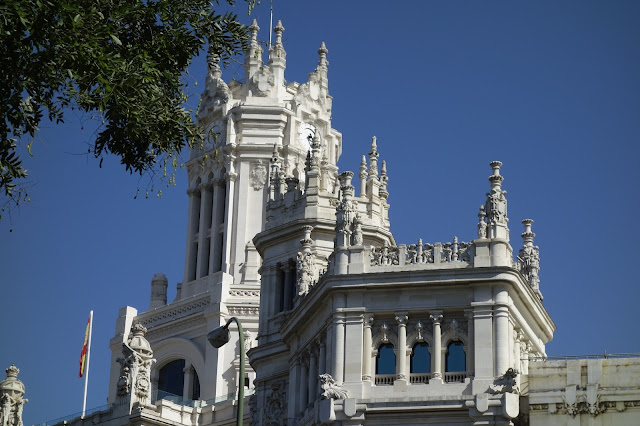 The tower at this palace sitting in the Plaza de Cibalees, allowed us to enjoy a beautiful view on a beautiful day. 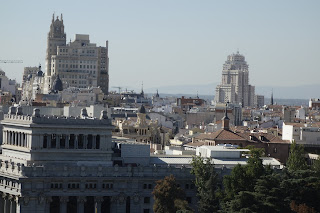 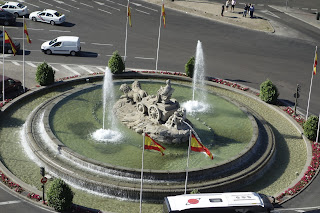 Finally, I guess it is near impossible not to go to Plaza Mayor (1617) which has been the venue for bullfights, coronations and other celebrations for the last 500 years. A statue of Phillip III has center stage. In today's world, I would describe it as a plaza of overpriced food with souvenir shops and some oddball street performers. 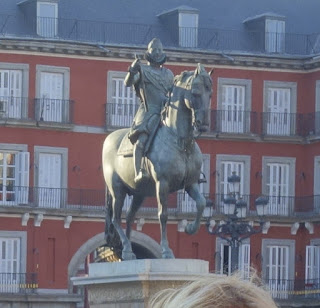 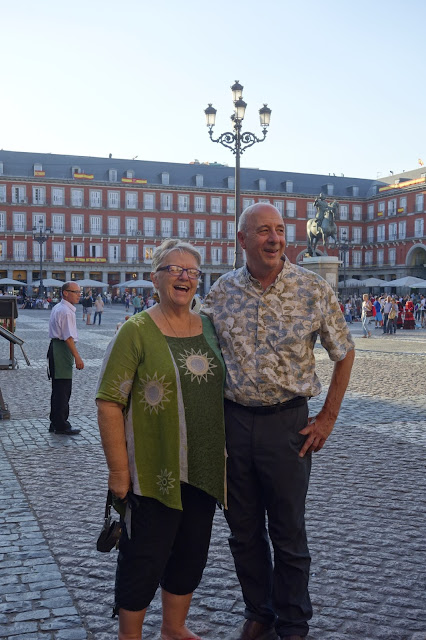