Another Big Trip--Spainhttps://www.facebook.com/, Gibraltar, Portugal with a Dido into Africa--the End of the Journey

With nothing more than cancelling our reservations in Evora, Portugal, buying ferry tickets and to Morocco, and making a hotel reservation, we changed directions. We were off to Africa!

We wanted to take advantage of the 1 1/2 days we had to take in Morocco, so I used TripAdvisor to find a restaurant in Old Morocco--the Casbah. 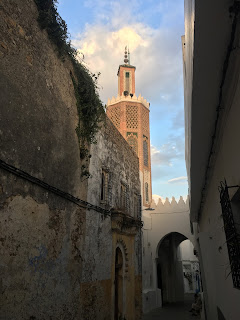 When the hotel van let us out at an ancient wall, the driver simply gestured toward an archway. I looked at him questioningly and he nodded. Off we went into the Casbah.

It looks much like it did in its origins in1660. Many of the households have no interior running water and share access out in the public areas. There are no alley signs, so once we were in the maze of narrow pathways, we had no idea how to get to the restaurant I had selected online, or any other restaurant for that matter.

When a teenager with English skills asked us if he could help us, we didn't immediately realize he was taking us on a tour we did not ask for. We wandered up and up and up, as the Casbah is on a hill. Following this young man, I saw as a lark, but Mike and Marin were a bit more leery of the situation. 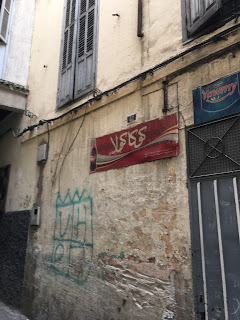 I kept thinking how lost we'd be without him. Mike was thinking that there would be a demand for money at some point. Eventually, with a lot of prodding on Mike's part, the teenager took us to the restaurant I'd named. They were closed because dinnertime in Morocco starts after 8:00 pm. and we were there around 7:00 pm. Mike handed the teen a small tip, and we were on our own.

Still on the lookout for food we spied a balcony terrace serving food. That took us a story up from the busy alleys and we got a nice view of the activity below. Aside from tourists, it is generally the male population out and about the city. 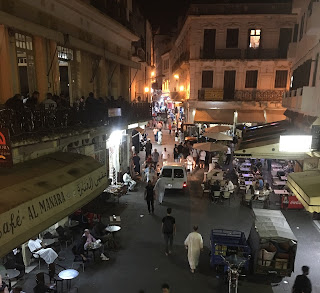 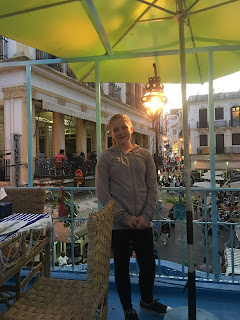 Once we were finished with our meal of various tagine prepared stews, we miraculously found our way back out of the maze where we called our hotel for a pick-up. 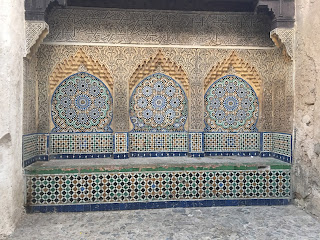 The next day we had a prearranged private tour of the Casbah. We saw so much and learned so much through the guide.  If you don't have plumbing in your home, you go to the public baths. If you don't have an oven, you take your food to the neighborhood oven to have your bread baked, your pistachio nuts roasted, your chicken baked, your cake baked. He does it all for just a few cents. 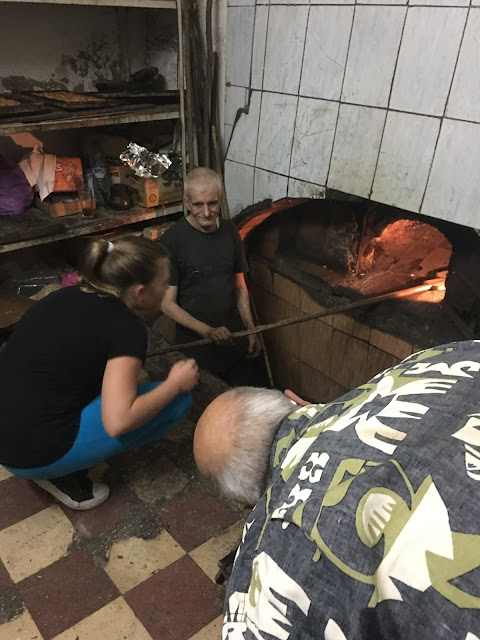 We visited an old Synagogue in the middle of the Casbah. Our guide, a Muslim, said in many ways that all religions have gotten along with each other for centuries.


There are markets for everything: olives, fresh fish, fruit, vegetables, and Rugs!

Yes, of course, we had the mandatory break of touring to see all the hand-crafted items made in the area. We drank tea while rugs were flipped out on the floor for our viewing pleasure. 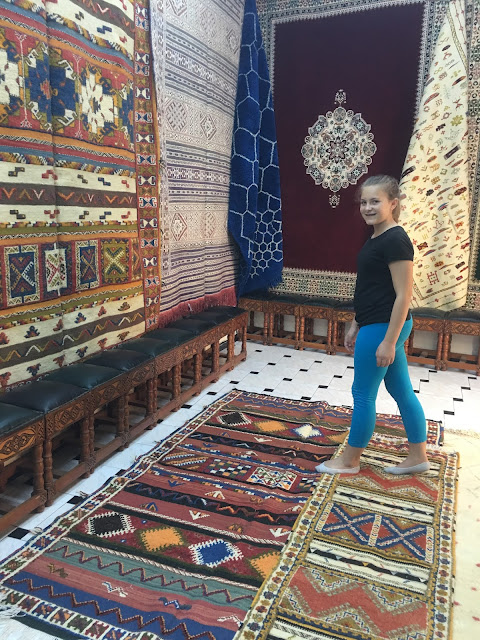 And, yes, we spent some money there.

After a fabulous Moroccan feast served by a Berber dressed in authentic attire of ornament-brimmed hat and curled-toe shoes that might have come off an elf from the North Pole, we returned to our hotel. We had a 4:30 am flight to catch the next morning to Lisbon, Portugal. 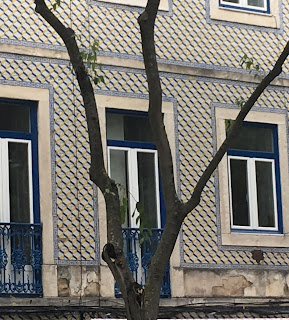 When I think of Lisbon, Portugal, tiles and art come to mind. It is amazing how many facades in the city are entirely covered with beautiful tiles. Also, art is everywhere, including on the streets and alleys. 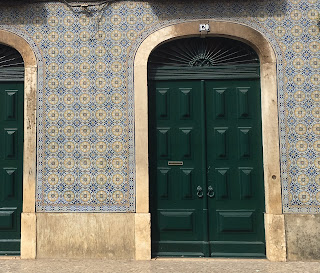 There are very few five-century old buildings because Lisbon suffered a huge earthquake in 1755. One-third of the population was wiped out, as well as most of the cathedrals and other buildings. 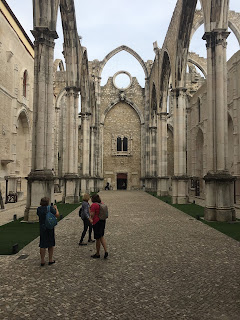 The Lisbon Archeology Musseum has been left only partly repaired.  The elegant Gothic arches remain.

The Estrela Basillica was built in the late 1700's. Queen Maria I fulfilled her promise to build this beautiful church after she gave birth to a son. 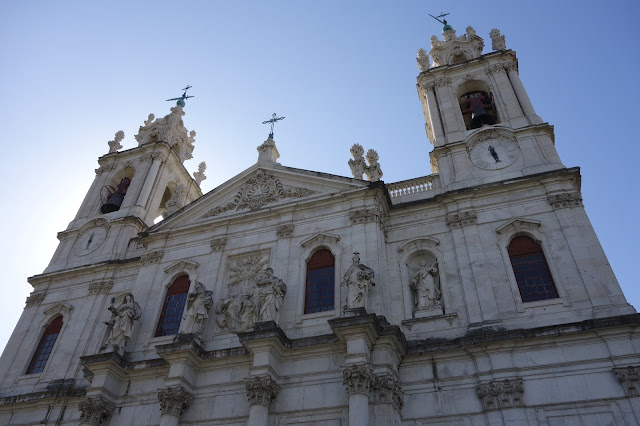 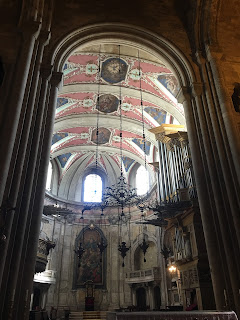 The Lisbon Cathedral's construction started in the 1100's, but has been rebuilt many times over the centuries. It is the oldest church in LIsbon. 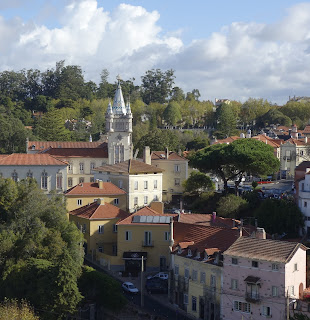 On our last day in Portugal we took the 30 minute trip to Sintra. This hilltop town has a long history of elaborate structures. At the very top of the hill is a castle built by the Moors. As spectacular as  that castle is, it is the mansions and palaces that attract the tourists. Sintra became a resort and vacation area for the rich at the beginning of the 20th century and these places are amazing!


The exterior is impressive, but it is the interior that dazzles the eye.
Below is the ceiling of the magpie room. 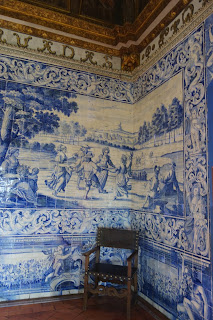 And the tile work is beyond description. 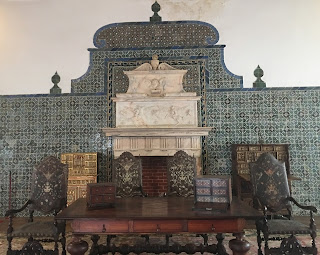 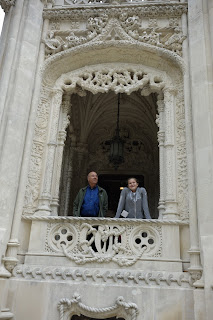 Perhaps as impressive as the buildings are the gardens and paths that weave up the hill of this estate.

And then there are the mysterious initiation wells. This was never used as a water well, rather it spirals down 8 stories. Used as some sort of initiation ceremony, Tarot and Masons are words associated with these underground towers.  Fascinating. 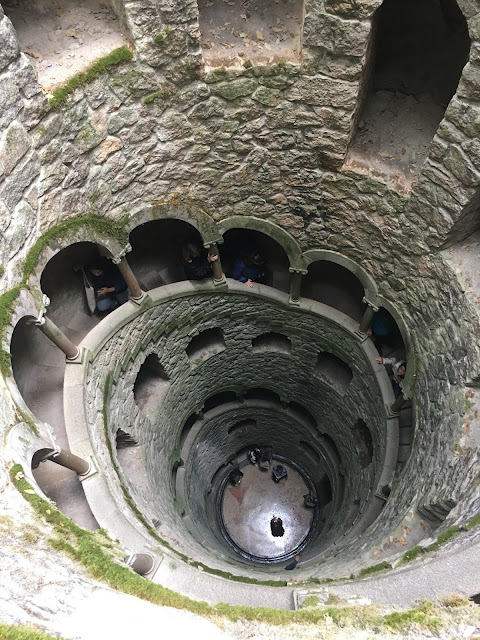 And so our journey was over--19 days, 66.7 miles covered by foot. Our eyes were opened to many new places, cultures, etc. I hope these trips with grandchildren inspire them to be global citizens.

Posted by Margaret Godfrey at 6:06 PM