Another Big Trip--Spainhttps://www.facebook.com/, Gibraltar, Portugal with a Dido into Africa, Part III

I ended Part II "we rent a car." Why is this significant? I can give a few tips here if you have not rented a vehicle in a foreign country.


Be sure to get photos of the car's scrapes and bumps before taking off--and pray you do not add to them. 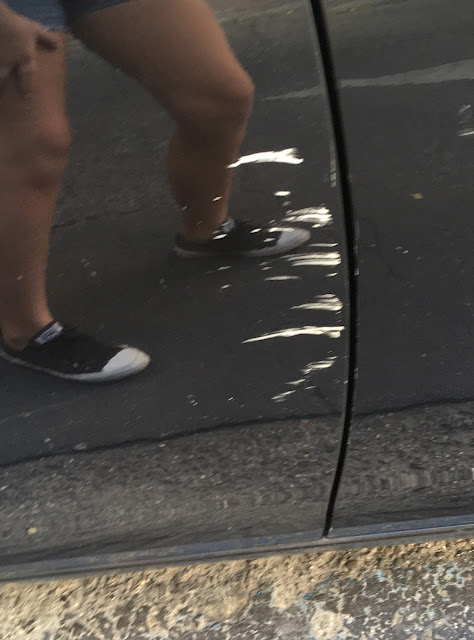 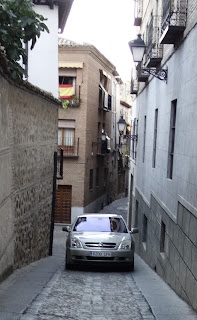 If you are lucky like me, you have a steady driver who can put on his big boy pants when he'd rather not. Hey, you have no choice once you made the commitment.

I will share our most stressful experience and let you imagine a few other similar adventures from there. We made the mistake of turning up the wrong street while seeking our Airbnb in Toledo. Inching up the narrow street, we came to a dead end where 2 cars were parked making turning around look like mission impossible. Marin and I got out of the car, one at the front, one at the back. Mike began the "back and fill" of the century. We guided him inch by inch, forward and back, at least 10 times. By the time we were turned around and driving downhill, we were three exhausted and sweaty people.

So back to renting a car. . . We had booked an Airbnb in Segovia. This was the place Marin had named as a place she really wanted to see months before our journey. Unfortunately, the apartment owner contacted us while we were in Barcelona to inform us that there were "structural issues" and the apartment was no longer available. That opened up 3 unplanned days. 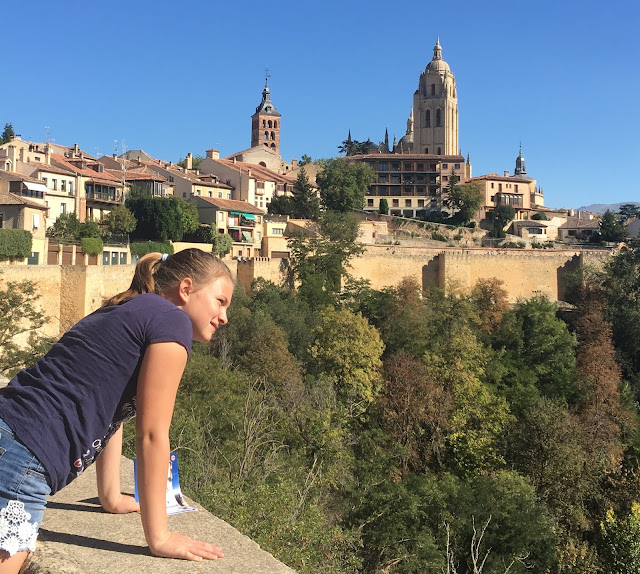 A car was the quickest way to get to Segovia, and then we could head South from there. 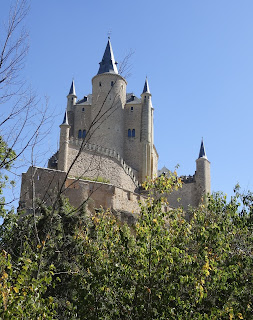 Why Segovia? For Marin, she was drawn to this castle which inspired Walt Disney's Sleeping Beauty castle. As I read about it, I was attracted to the history as well as the architecture. Celts, Romans, Visigoths, Moors, they all preceded Christians who turned this into an illustrious place. 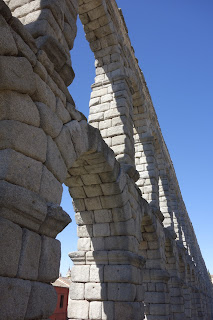 The still standing aqueduct dates back to the first century A.D.

The Castle was built in the early 1100's. This is where Columbus asked Queen Isabella for support to explore the seas. 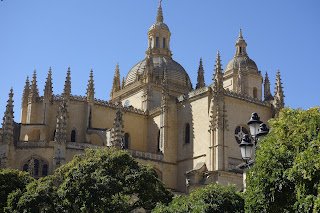 The Romanesque Cathedral was burned down and rebuilt in 1525.

There is a creepiness to the thought of so many dead below your feet. 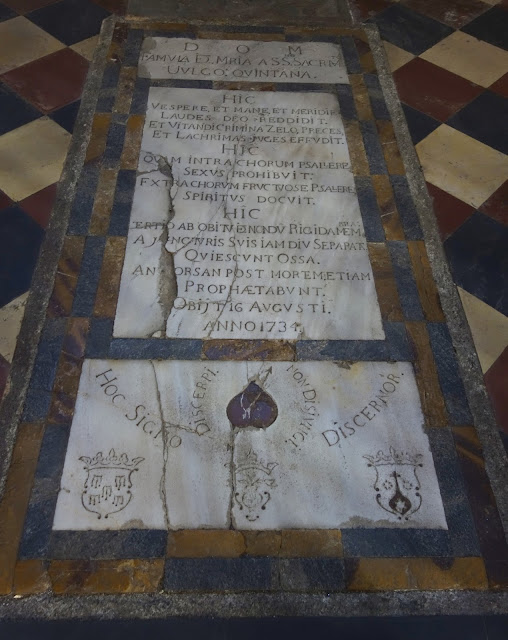 If you get up close, you can see the amazing hand stitched faces in the scene on this religious garb. 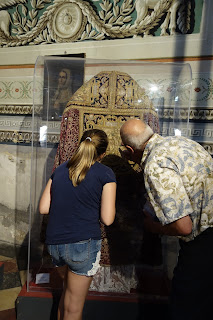 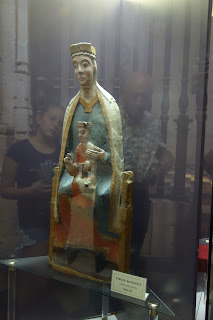 Amidst all the glitter and grandeur, I loved this humble sculpture of Madonna and child from the 1200's.

Can you imagine Christopher Columbus gazing across the landscape waiting to meet with Queen Isabella? 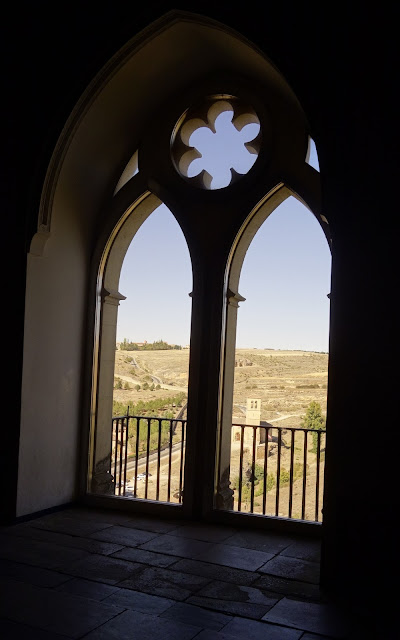 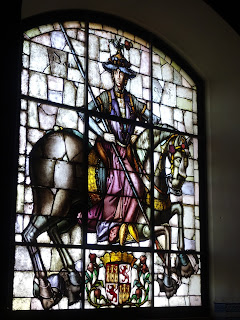 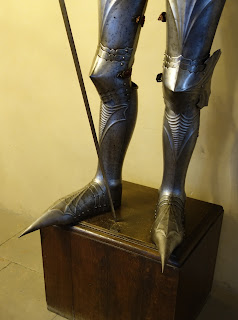 As the Knights in armor come and go--Ouch!! This brings getting kicked to a whole new level.

Unfortunately we only had one day in this charming wall-surrounded hilltop town. 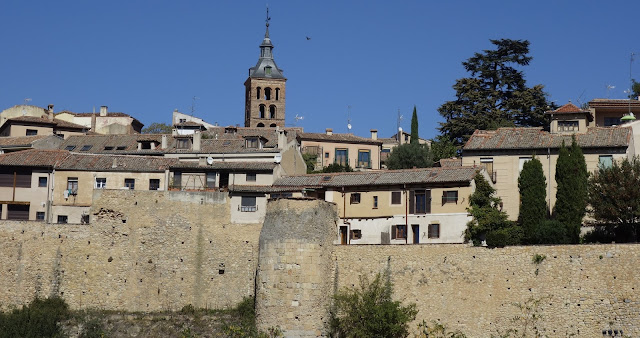 After Mike's fine driving getting us out of the narrow streets, I found driving on the highway quite relaxing. There was very little traffic and the roads are extremely well maintained.

Since our Segovia apartment cancellation, three days opened up. There was only one night available at an Airbnb we found in Toledo. (That's where the back and fill nightmare occurred.) We finally found our apartment, which was wonderful, but it was late and we didn't see much on our way to dinner. 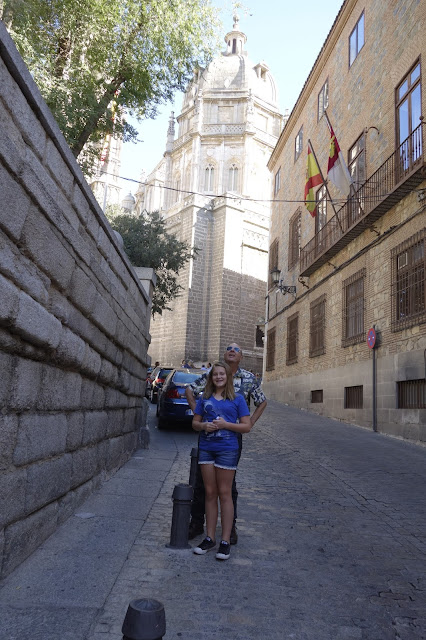 The next morning we headed out in hopes of seeing some of this historical place. When we got to the Cathedral we ran into mobs of tourists. We kept diving into doorways to avoid the cars were bringing up people for a wedding. The plaza was filled with a peace demonstration asking for a resolution to the Spain/Catalonia dispute. In other words, it was not inviting to wander the streets. 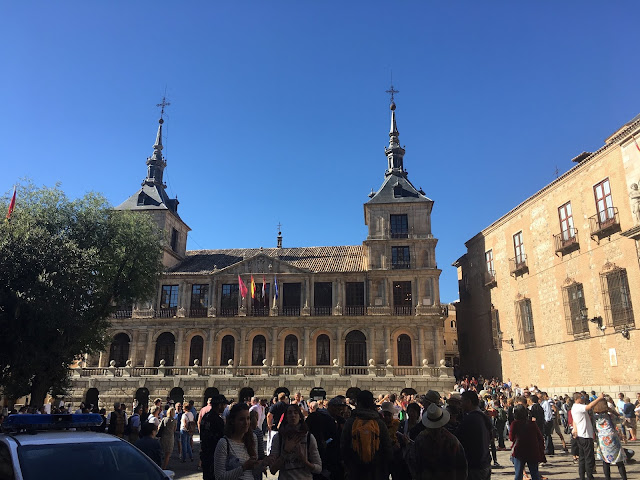 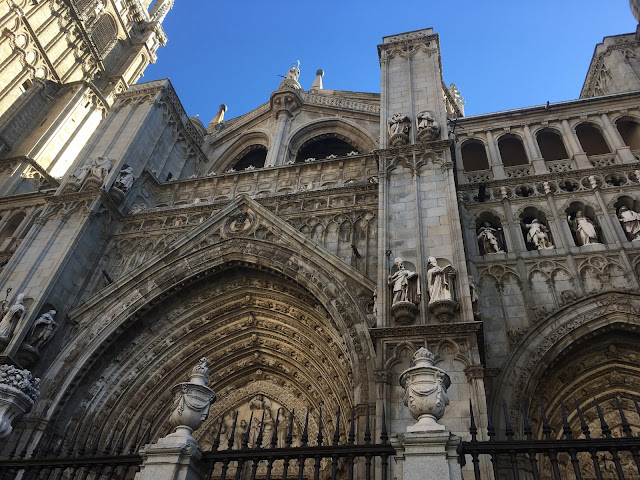 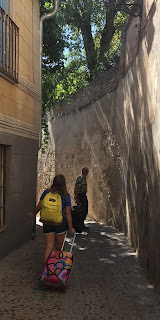 Next time, I would make Toledo a long lay-over. With the grandeur of the having the Royals live there until they moved to Madrid and an El Greco Museum, I know it would be a wonderful stay. But it was not to be on this trip.

We decided to hit the road to our next 2 nights in Ibros. Never heard of it?  We hadn't either, but we found a place to lay our heads and a new area to explore.

Along our drive south, we were reminded we were in Don Quixote territory. 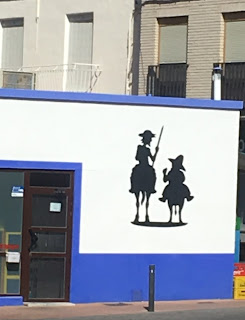 Posted by Margaret Godfrey at 12:40 PM